7 years ago at 9:00 am ET
Follow @AllThingsPats
Posted Under: Uncategorized 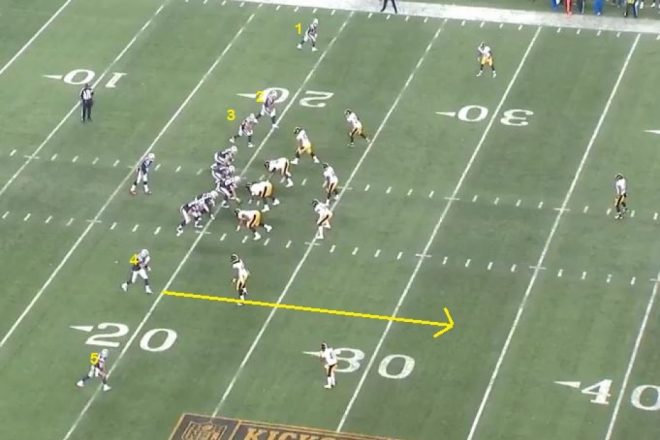 NFL Week Two kicks off Thursday night on CBS with a compelling matchup as the Denver Broncos travel to Arrowhead Stadium to take on the Kansas City Chiefs. These two division rivals both won last week, though the Chiefs did it in convincing fashion on the road at Houston, while Denver escaped with a home victory against Baltimore thanks in part to veteran wide receiver Steve Smith’s inability to catch a pass that bounced off his face mask. Game starts at 8:25 eastern time.

Peyton Manning threw for just 175 yards on 40 passes against Baltimore, with four sacks, no touchdowns, and a pick-six. That works out to less than 4.4 yards per pass attempt, and when you factor in the yards lost on those sacks you have 150 net yards – an abysmal 3.75 yards per drop back. On the field Manning looked similar to how he played in January’s playoff loss to the Colts, and over the last five or six games does not appear to be able to throw a long pass or deep out that looks like anything but a wounded duck.

Denver could help Manning out by relying more on their running game, but getting that fixed on a short week playing on the road will be a difficult task to accomplish. Starting RB C.J. Anderson averaged a mere 2.4 yards per carry, and Ronnie Hillman – who took over late in the game – wasn’t much better on the same number of carries (12), averaging 3.4 yards per carry. Denver’s offensive line wasn’t opening up holes for either running back, and suffered in pass protection all game long.

While the Broncos have plenty of questions on offense, their defense had no problems at all. Joe Flacco was under pressure all night long, was sacked twice and picked off for two interceptions. Justin Forsett managed only 43 yards rushing and the Ravens’ offense was held to under 200 total yards since 2013. Denver’s entire front seven – led by Von Miller and DeMarcus Ware – was stellar, and will cause opposing offensive coaches headaches all year long. If that’s not enough, the cornerback tandem of Chris Harris and Aqib Talib is one of the best, if not the best in the NFL this season. The bottom line is that regardless of how their offense performs, the Denver defense alone makes the Broncos a legitimate Super Bowl contender.

On offense the Kansas City Chiefs are led by RB Jamaal Charles and TE Travis Kelce. The 6’5″ 255 pound Kelce is arguably the second best tight end in the league right now, and physically he looks – and plays – like Gronk. Kelce has 29 receptions in his last five games, and caught two touchdown passes last week. Utilizing quick passes to Kelce and Charles can keep the Denver defense honest, and slow down their ferocious pass rush.

Led by outside linebacker Justin Houston, the Chiefs harassed Brian Hoyer and Ryan Mallett last week. The Chiefs tallied five sacks, four quarterback hits, and added five tackles for a loss in last week’s victory. They will need that pressure to continue to be effective in order to help out their young corners. Starting at CB for Kansas City are rookie first-round draft pick Marcus Peters, and second-year player Phillip Gaines.

The Chiefs are listed as three-point favorites in this game, with the over/under varying between 41½ to 42½ depending on where you shop. There is a 30% chance of showers and thunder storms, with accompanying winds getting up to 12-17 mph. I would think that inclement weather would favor the Chiefs and their shorter offensive game plan, though frankly it may just stymie both offenses equally.

Kansas City has a nicely balanced offense, and between their quick, short passing game and superior running game, they have an excellent opportunity to end their six-game losing streak to Denver. I would expect a close game, being decided by a field goal either way – but I’ll go with what will surely be an extremely loud Arrowhead Stadium helping out the KC defense on a few occasions as the X factor.

By: Robert Alvarez
Linebacker Jahlani Tavai agrees to a two-year contract extension with the Patriots.
12 hours ago

By: Robert Alvarez
Devin McCourty will appear in his 200th career NFL game on Thursday night against the Buffalo Bills, Robert Kraft honors his milestone.
14 hours ago

By: Robert Alvarez
Sideline mic'd up sights and sounds during the New England Patriots' Week 12, thanksgiving matchup with the Minnesota Vikings.
15 hours ago