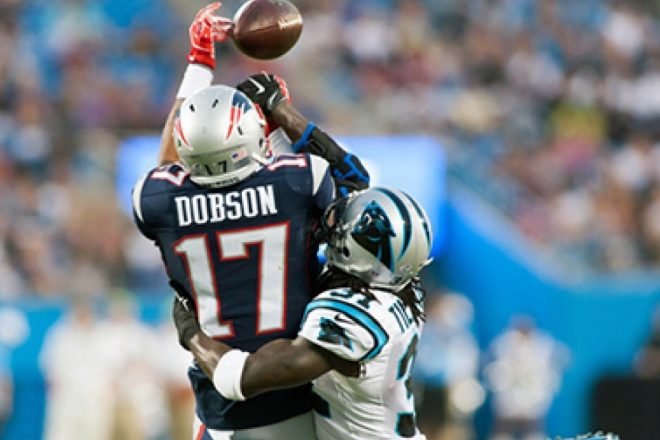 Things are starting to come together for the Patriots, who won their second-straight preseason game against Carolina on Friday night with a 17-16 victory, improving to 2-1 heading into their final exhibition game next week against the New York Giants.

There were some improvements in several areas, with Brady and the offense finally starting to click in the second quarter, while the defense also played well and held Cam Newton and company to just six points in the first half.

Here’s a quick rundown of how things went for some of the players who made a little noise during this one:

Tom Brady – What started out rocky turned out pretty well for the veteran quarterback, who had a rough first quarter where he finished 2-of-6 (33%) for 13 yards and two interceptions, but in the second quarter he finished 5-of-7 (71%) for 71 yards, which included a drive at the end of the half that ended with a terrific touchdown throw to Scott Chandler.  It was good to see him turn a corner, and hopefully provides a little momentum heading into this final week.

Jerod Mayo – Mayo stepped up and played well Friday night, showing some nice speed and quickness and was consistently around the football.  He seems to be settling back in quite well coming back from his injury last season, which is certainly good news for New England’s defense.

Rob Ninkovich – Ninkovich looks as good as ever so far and he did a good job putting pressure on Newton and the Panthers offense.  He’s had a good preseason, and it looks like he could be set for another good year.

Scott Chandler – Fans caught their first glimpse of Chandler Friday night, and if this is any indication of what lies ahead, there are big reasons to be excited about what the future holds this season for the newly-signed tight end.  Chandler finished with 3 receptions for 40 yards, including his 18-yard touchdown reception from Brady right before the end of the first half.  He should be pretty dangerous once he’s placed out there alongside Rob Gronkowski, Julian Edelman and Brandon LaFell, and the Patriots offense could be pretty lethal this season.

Tarell Brown – Brown had a great night in coverage and played well.  With the cornerback situation still somewhat uncertain opposite Malcom Butler, Brown has quietly become a viable candidate for the job and Friday night was another good effort for him.

Dominique Easley – Easley had one of his best performances so far as a pro and it was actually surprising to see just how fast and strong he looked, with the second-year defensive lineman finishing the night with a sack, two quarterback hits, and two tackles for a loss.  The sack was impressive as Easley broke through and took Newton down with just one arm, showing you how strong he really is because Newton isn’t exactly a small player.  Hopefully this is just the beginning and if it is, he’s going to be fun to watch this year.

Chandler Jones – Jones had another good night, finishing with a sack and provided some good pressure.  He’s had injury issues in past seasons but if he stays healthy, he’s another player that will hopefully finally help New England put pressure on opposing quarterbacks.

Jabal Sheard – Sheard had a quiet night but still made some noise for the Patriots defense, including a big stop inside the seven yard line when the Panthers were driving.  He’s had a great camp and a great preseason and appears to be another great addition this offseason.

Dax Swanson – Swanson had a good game, finishing with two passes defensed and played well.  It was his best night so far, and it was hard not to notice him.

Malcolm Butler – Not much else can be said.  Butler continues to play well and looks confident, and his body control and quickness is just impressive.  Hopefully this carries into the regular season, but he really seems like he’s going to have a good year.

Dion Lewis – Lewis had another solid outing, catching all four attempts thrown his way, including a 9-yard touchdown pass in the fourth quarter that helped pull the Patriots within two points, and they eventually kicked the game winning field goal on the ensuing drive.  Lewis has had a good preseason and seems to have a good shot at earning the role as the team’s third down back.

James Morris – Morris lead all Patriots tackles and played well.  He’s another player that has had some good moments, giving New England a pretty deep group as they continue evaluating their roster.

Jimmy Garoppolo – Garoppolo had another great night and it was probably his most complete performance of the preseason as he played well from start to finish.  He’s progressed quite a bit this preseason and he’s certainly starting to look like an NFL quarterback, which considering the uncertainty still surrounding Brady’s status for week one, it’s definitely encouraging.

Aaron Dobson – Dobson had a rough night, which saw him make a great reception early in the game but it was ripped away from him by Charles Tillman as he hit the ground.  He also had another pass attempt to him intercepted after Brady followed him with his eyes but it almost looked like Dobson stopped a little too soon in his route instead of moving laterally a little farther.  However, he redeemed himself late in the contest after hauling in a 40-yard reception from Jimmy Garoppolo that helped pull the Patriots back within two at 16-14.  So it was good to see him continue fighting and that’s what he’ll need to do to be on the roster in two weeks.

LeGarrette Blount  – Blount hasn’t had a great preseason, and Friday night was another rough night.  He was playing late in the game behind a bad offensive line mix, and he struggled to gain much in terms of yardage.  He finished the night with 8 carries for 31 yards, but he had a couple carries for either no gain or a loss and he’s too big and too powerful to let that happen.  Hopefully once he’s back behind New England’s normal offensive line, we’ll see the same production we saw the past two years.

Brandon Bolden – Like Blount, Bolden couldn’t get much going in the running game either and was taken down multiple times for a loss.  Fortunately he’s a terrific special teams player, but it would be nice to see him make more consistent contributions running the football.

Jonas Gray – Gray had a rough night as well, and he was another back that struggled gaining yards.  He finished with the lowest yards-per-carry average of any of the Patriots players Friday night, averaging a paltry 2.2.  He’s had some good moments during this preseason, but unfortunately Friday night wasn’t one of them.