7 years ago at 6:46 am ET
Follow @SteveB7SFG
Posted Under: Patriots Commentary 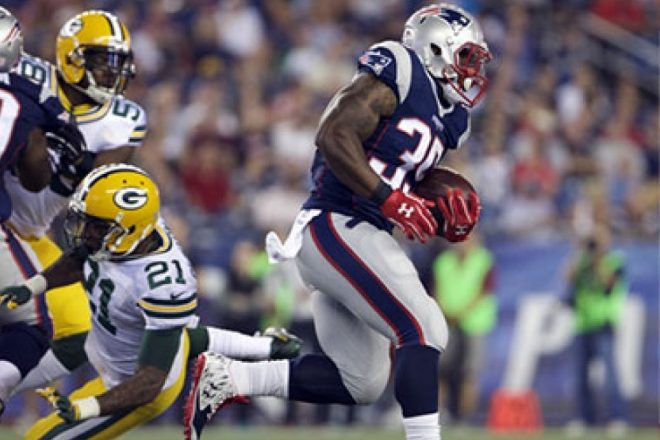 The Patriots turned in a sloppy performance in their preseason opener as they fell to the Green Bay Packers 22-11 on Thursday night in Gillette Stadium.

Bill Belichick wasn’t pleased with the sloppy performance as his comments immediately after the game would suggest.

“Alright, well it’s pretty obvious tonight we’ve got a lot of work to do. We played a lot of players, certainly [did] some good things, certainly a lot of things we’ve got to correct and work on,” Belichick said.

“We’ll just get back to work tomorrow on some of the things that obviously we need to do a better job of. I don’t think we did anything well enough on offense, defense or special teams really to the level that we need to be at. We’ll work on everything and try to keep improving.”

Tom Brady was the surprise starter and played only seven snaps as the majority of the team’s top skill players either didn’t play or just made a cameo. Brady was 1-4 for 10 yards in a forgettable night for the veteran QB.

Jimmy Garoppolo got the majority of the reps at QB and finished 20-30 for 159 yards and one interception. He too started sloppily going only 5-13 in the first half. He was sacked a total of seven times and was under duress many other times as well.

But with no Julian Edelman, Brandon LaFell, Rob Gronkowski, Scott Chandler, Aaron Dobson, Brian Tyms and LaGarrette Blount for the skill players it was expected that he wasn’t going to light things up. Danny Amendola just played briefly and was sat down for the night.

Gray Bursts Back Into Spotlight: With LaGarrette Blount out, the big back duties fell to Jonas Gray and the 2nd year player came thru with the type of performance you’d look for. Displaying a nice extra top gear, Gray burst around the right end in the second quarter for a 55 yard touchdown run where he was able to not only gain the edge but distance himself from the defenders chasing him down.

The play was sprung by FB James Develin who sealed off CB Micah Hyde and helped along by rookie guard Mason who got to the second level and rubbed the linebacker off just enough to get Gray into the open field.

Gray and Blount both seem a tad leaner and quicker during the early going of training camp and it seems to be paying dividends. Gray finished with 7 carries for 74 yards and the team’s only touchdown on the day. He also added the two-point conversion.

Defense Plays Well, Freeny, Roberts Start: The starting defense was missing starting linebackers Dont’a Hightower and Jerod Mayo and Jonathan Freeny was the recipient of the majority of the snaps. He was pretty solid, providing good run support, and pass coverage.

Rookie Darryl Roberts got the surprise start opposite Malcolm Butler and played very well until leaving the game late in the first quarter with what looked to be a wrist injury. Butler only played a handful of snaps as the coaches tested the back end of the roster in a game situation.

Rookie Trey Flowers was off to a solid start as well at defensive end until he too was hurt and had to be helped off the field by the training staff. He didn’t return and it isn’t known what type of injury he suffered.

Chandler Jones and Jabaal Sheard displayed some nice bursts off the edge as well. Logan Ryan was beaten badly on the Packers touchdown toss by Scott Tolzein in the second quarter. He later redeemed himself somewhat by breaking up a fourth down pass.

Rufus Johnson also had a solid outing, notching a sack and batting down a screen pass at the line of scrimmage. He too was banged up late in the game and was forced to leave.

Boyce Drops Chance to Solidify WR Role: Perhaps the most disappointing player on the field was Josh Boyce. With so many of the skills players out, this was a golden opportunity to shine in a starting role. But right off the bat things went awry; he ran a deeper out route on his first snap, Brady threw a 6-7 yard out route and Boyce took it deeper as the pass sailed to no one on the sideline.

Then on 3rd and 8, he had a high but very catchable ball sail right thru his hands ending the Patriots first drive of their preseason stuck inside their own five yard line. Boyce was targeted 11 times on Thursday night and came away with two catches. Not the type of game the team was looking for.

After a series of practices where he was getting a lot of reps thrown his way, this has to be considered a major step back for the 3rd year WR trying to solidify his roster position. Brandon Gibson did make a few tough catches on the night, hauling in 4 catches for 29 yards. Rookie Chris Harper made 7 catches in the second half for 48 yards.

Stephen Gostkowski boomed a 56-yard field goal with plenty of room to spare as time expired in the first half culminating a two-minute drill where Garoppolo held the ball too long and took a sack forcing the team to spike the ball on third down and go for the long three point attempt.

It is exactly that type of situational football that Bill Belichick practices every day to get the team in the position to succeed. Things were going well until the sack, but Gostkowski turned things around with a stellar boot.

Overall this was not the kind of performance that Belichick was looking for; the team was only 5 of 13 on third downs and had 8 penalties for 74 yards many extending drives for the Packers offense.

The team gets back to work for the final open practice of training camp on Saturday and travels to West Virginia for joint practices with the Saints before playing New Orleans in their second preseason game next week.