PatsFans.com Supporter
Awesome!!! Never been so happy with a 1st round sine I don't know when!!! 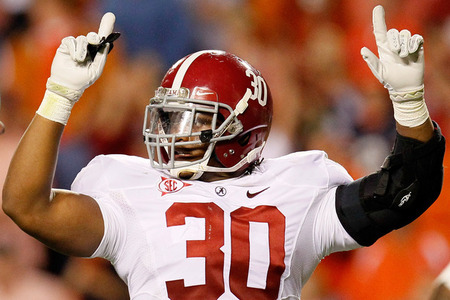 Bill took the guy I wanted AND moved up for him?!?!?! Someone wake me up!

Isn't Hightower an Inside Linebacker ? How is that a DE replacement ?

Dont'a was my favorite Saban-coached prospect for the Pats, and like most here, I didn't think he'd slide to our two picks. And he didn't -- BB went up and got him. From my notes, I saved this quote from Saban about Hightower, so folks would get an idea how BB may use him -- if we were fortunate enough to get him:

He can play inside or outside backer, he can play mike or will inside. He’s played them both here. He can play outside, he’s been a designated pass rusher on 3 downs for us. He’s also been a stand-up fourth rusher when they put all the linebackers in there. He can play any one of those positions.

He’s a smart guy, he’s a signal caller that has really good leadership qualities and understands football extremely well and has a lot of diversity in terms of how you can use him. When you’ve got guys that size, that speed and that athletic who can do so many things, those guys don’t come around very often.
Click to expand...

scott99 said:
Isn't Hightower an Inside Linebacker ? How is that a DE replacement ?
Click to expand...

Belichick is going back to a 3-4 base, Hightower is a LB, period and he's going to play inside and out. If jones can get up to speed fast enough then they will have a starting LB corps of Hightower/Mayo//Spikes/Jones, and that has exceptional potential and Ninkovich, Fletcher, and Cunningham or Scott give them really good depth. This team just got a whole lot better.
H

who cares what hightower can play, all I know is that we traded up again to grab whoever the Ravens wanted, sorry Ravens we own you on the field, also owns you on draft day! Now think about if we didn't trade up both Gronk and hightower could have been a Raven...

so how do we utilize hightower because i keep hearing that we're loaded at his position...
S

Henroc said:
so how do we utilize hightower because i keep hearing that we're loaded at his position...
Click to expand...

He can play MLB, OLB, and DE depending on the package. Given the amount of snaps the Patriots take in the sub-package, there'll certainly be instances where he's on the field with both Mayo and Spikes.

I think some key points are probably in this section of his profile:

Pass defense: Top zone awareness kept him on the field in passing situations despite average speed. Drops to first-down marker quickly and watches for crossers in front of him. Very aware of RB routes with effort to attack throws to the sideline. Lacks speed and short-area quickness to handle NFL slot receivers and better tight ends in man coverage; can struggle to track and catch up with misdirection. Manhandles receivers at the line of scrimmage.
Click to expand...

Do these picks mean 4-3 is locked in? Chandler Jones as DE, Hightower as SLB, switching to DE in sub?

manxman2601 said:
Do these picks mean 4-3 is locked in? Chandler Jones as DE, Hightower as SLB, switching to DE in sub?
Click to expand...

I guess it depends on how you define "Locked in".

PatsFans.com Supporter
Him and Jones..man..what a draft..can not wait to see these guys on the field in the fall

Brady_to_Moss said:
Him and Jones..man..what a draft..can not wait to see these guys on the field in the fall
Click to expand...

I'll even be happy when late July gets here. I usually go to 1 or 2 practices + the in stadium practice, and I hope to go to one or two more on top of that this year. CAN. NOT. WAIT. :rocker:

PatsFans.com Supporter
2019 Weekly Picks Winner
2020 Weekly NFL Picks Winner
By mid season this D should be top 15 or higher. No more bottom of the league with the moves BB has made this off season and during the draft.

The youth on the edges will show as they settle in and get experienced.

Stay healthy and nobody will challenge them in the AFC East.

Doug Kyed over at the NE Patriots Draft site had an interesting thought on Hightower. He makes some comparisons to defensive players then has this:

Those are all fine comparisons, but the one I immediately thought of was an offensive player. Dont’a Hightower can be the Aaron Hernandez of the defense.

Opposing defenses always have to be on edge when Hernandez is on the field, which at this point is nearly every snap. Hernandez can line up out wide as a split end, he can line up in line as a tight end, he can line up as a joker, an H-Back, a fullback, a halfback, in the slot, he can run the ball, catch the ball, run block, and very rarely, pass block. He’s the player that is almost impossible to account for. If the Patriots have three WRs, Gronk and Hernandez on the field, you’d assume a passing play was coming. But since Hernandez can also run the ball out of the backfield, you can never be entirely sure.

With Hightower on the field, similar deception can be employed. Hightower can be used at SILB, WOLB and SOLB in a 3-4, and MLB, SLB and DE in a 4-3 alignment. In nickel and sub packages, he can play linebacker in a zone cover role and he can rush standing up or with his hand down. Since we’ve seen it from Fletcher, I wouldn’t be surprised if we saw Hightower line up at DT at least once as well.
Click to expand...