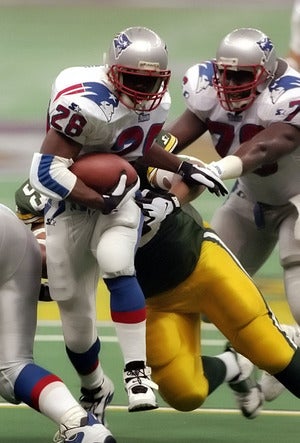 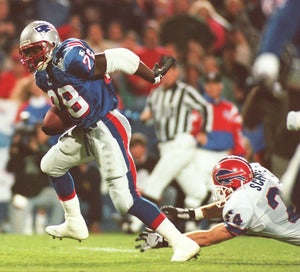 In just three years with New England, Martin rushed for 3,799 yards (4th most in team history) and 32 touchdowns (4th best at the time, 6th now). Curtis accumulated 4,689 yards from scrimmage with the Patriots, and 37 touchdowns; while in New England he was the Offensive Rookie of the Year and was named to two Pro Bowls. In his first NFL playoff game Martin was immense, rushing for 166 yards and three touchdowns as the Patriots crushed Pittsburgh 28-3.

Despite being in Foxborough for just three seasons, Curtis Martin was an easy choice for the Patriots 1990s All-Decade Team.

Curtis Martin retired with 14,101 career rushing yards, fourth most in NFL history. He was elected to the Pro Football Hall of Fame in 2012. 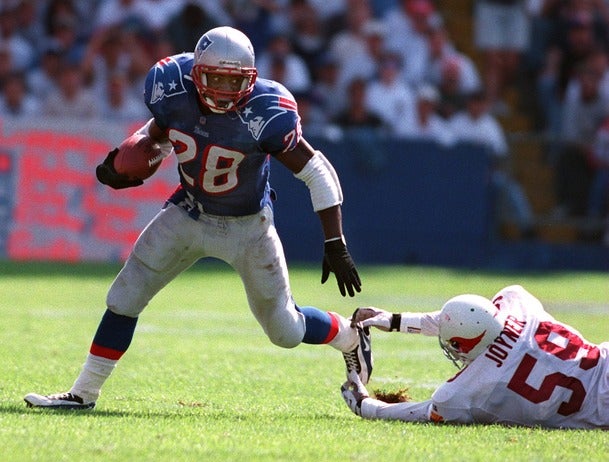 During six seasons with the Pats, Welker was an All-Pro twice, selected to the Pro Bowl five times, and led the NFL in receptions three times. Though the Pats did not win a Superbowl during that time, they did go 74-20 (.787) with two conference championships during that span. Welker holds the franchise record for career receptions (672), is second in receiving yards (7,459) and eighth in TD receptions (37). He not only holds the team's single season record for receptions (123), he also ranks 2nd, 3rd, 4th and 5th in that category. Welker ranks 21st all time in NFL history with 903 career receptions, and 17th with 16,797 career all-purpose yards.

Unfortunately many Patriots fans remember Welker primarily by this one play:

For something a bit more positive, here's this:

And he did have a sense of humor:

There is also this creative (but creepy) subtle jab at Roger Goodell over the bogus TB12 suspension:

Eric Saubert was originally a fifth round draft pick by the Falcons in 2017, and was the first player in 35 years to be drafted from Drake. He was waived by the Patriots as part of roster cutdowns, on August 31, 2019. Currently a free agent, Saubert has also been with the Raiders, Bears and Jaguars; he has appeared in 40 NFL games, with ten receptions. 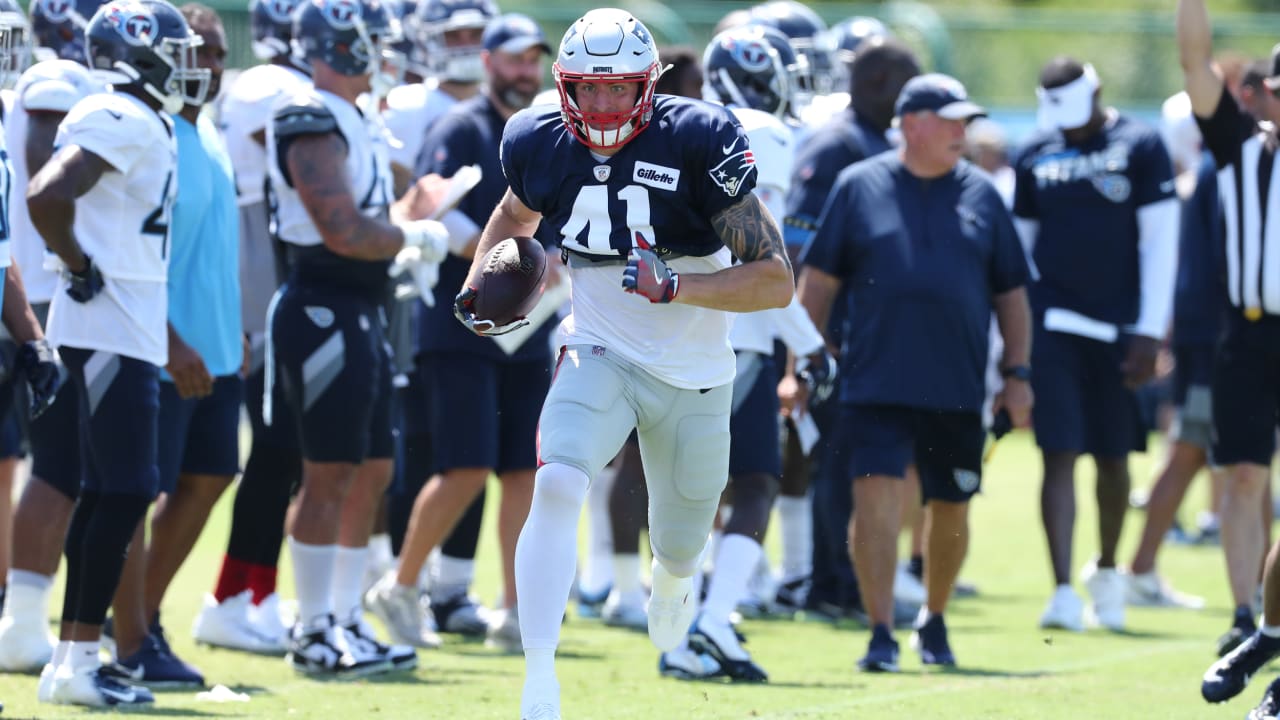 Getting to know Eric Saubert

Get to know the new Patriot.


Other pro football players with New England connections born today:
- Jackson Keefer: tailback for the 1926 Providence Steamrollers, who was also an alumnus of Brown University.
- Rudy Romboli; born and raised in Everett, Romboli was a fullback in the 1940s for the Boston Yanks.
- Bob Marques; the Medford born Marques grew up in Everett and was a Boston University graduate before playing six games at linebacker in the AFL's inaugural season for the New York Titans.
- Terry Rennaker; born in Newport, Rennaker appeared in 15 games for the Seahawks in 1980.
- Bruce McGonnigal; born in Cambridge, the TE played for the Cleveland Browns in 1991.
- Erny Pinckert: wingback for Boston Braves was named to two Pro Bowls.

Besides Curtis Martin, three other Hall of Famers were born May 1:
- Ollie Matson; All-Pro RB for Chicago Cardinals in each of his first five NFL seasons.
- Chuck Bednarik; 8-time Pro Bowl LB/C for Eagles known for his vicious hits, including one that knocked Frank Gifford out of the NFL for a year and a half.
- Cliff Battles; tailback for the Boston Braves in the 1930s.


May 1, 1984: Day One (rounds 1-3) of the NFL Draft, from the Omni Park Central Hotel in NYC
Pats trade up 15 spots, sending 1.16, 1.28, 10.265 and a 1985 first to Cincinnati for the first overall pick
The Patriots would have been better served to stand still, with far too many other positions in need of an upgrade to make this trade. On top of that giving up three firsts (one came from the Mike Haynes trade) for one is not a good value - and using the number one overall pick on a wide receiver is never a good idea.

It took Ed Williams four seasons to break into the starting lineup, and he finished his career with just ten NFL starts. Jon Williams never had an opportunity to showcase his potential; he blew out his knee in his rookie off season, abruptly ending his pro football career.

Not a good draft - especially when you consider it began with two firsts, and four of the top 70 picks.

May 1, 1990: New England signs undrafted rookie Tim Hauck
The safety from Montana was a victim of final roster cuts, and later signed to the practice squad. Hauck was elevated to the active roster on October 27, and made his first NFL appearance the next day versus Buffalo. He played in all ten remaining games in 1990, then signed with Green Bay the following spring. Unfortunately for the Patriots he went on to play in 183 NFL games over 13 years with several other teams.

May 1, 2006: Patriots sign eight undrafted rookie free agents
The one player of note from this group was Pierre Woods, from Michigan. Woods was an occasional fill-in at linebacker but primarily a special teams ace. He played in 54 games with eight starts, plus seven playoff games.

May 27 in Pats History: Tony Collins