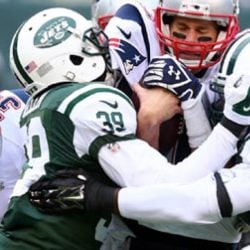 Even though the Patriots are on CBS, displaced New England fans should be happy to hear that the Pats-Jets game will still receive extensive broadcast distribution throughout the United States. Ian Eagle and Dan Fouts will be the announcers on CBS between these two original AFL rivals, as they meet for the 113ᵗʰ time; the Patriots lead the all-time series 58-54-1. 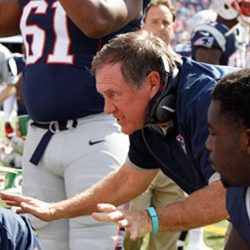 NFL Week 3 Previews, Predictions and Picks Against the Spread

NFL week three has a few interesting matchups on tap. During commercials for the Pats-Jaguars game – or if it turns into a blowout – Pittsburgh at St. Louis and Cincinnati at Baltimore are a pair of compelling early games on CBS. Once the game against Jacksonville ends, Pats fans should be interested in leaving the tv on to watch a pair of AFC East teams meet as the Bills are at Miami in a late game on CBS. The other late game on CBS is a bit of an anomaly, as it is a cross-flex game between two NFC teams: Seattle will look to get their first win of the season as they host the Bears, who will be quarterbacked by Jimmy Clausen.

One early game on FOX features an underachieving 0-2 team versus a 2-0 team that has exceeded expectations as the Jets host the Philadelphia Eagles. Atlanta is at Dallas in a clash of 2-0 teams early, and the late game on FOX should be a good one with San Francisco at Arizona. Detroit looks for their first win Sunday night at home against the Broncos, and the week wraps up with Kansas City at Green Bay on Monday night.