4 weeks ago at 6:00 am ET
Follow @MarkMorse5
Posted Under: Patriots News 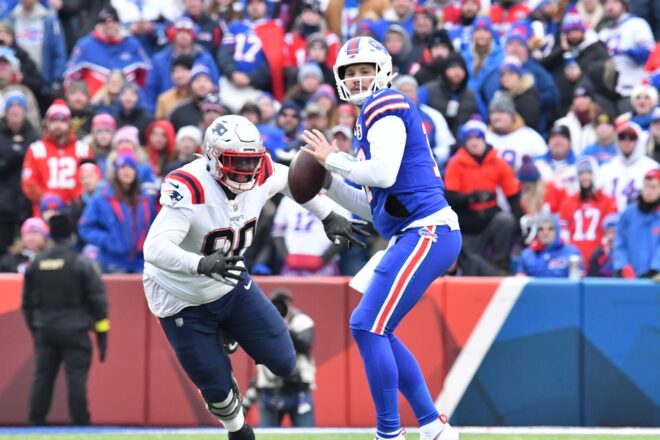 The tumultuous 2022 season comes to an end in Orchard Park.  I expected the Bills to come out on fire with all the hype about Damar Hamlin’s recovery.  They didn’t disappoint.  What was disappointing is that the Patriots gave up the opening kickoff return for a TD.   The Patriots were down their leading tackler Brenden Schooler (inactive) on Special Teams.  During the game, they lost two other contributors in Demarcus Mitchell and Jabrill Peppers.  I would have fired Patriots Special Teams coach Cam Achord immediately after the game.

I must admit that Mac Jones and the Offense played perhaps their best game of the year.  The Defense held Buffalo in check midway through the third quarter.

Next week I will do an analysis of the season but today will concentrate on the game itself.

These were some of my observations:

In a strange turn of events, the team put both jake Bailey and Jack Jones on the Suspended /IR list.  This was retroactive to Dec 31st.  This means both players lose two paychecks.  Bailey, through his agent, has made it known that he is challenging the suspension with the Payers Union.  According to Mike Reiss, Bailey stated that he wasn’t ready to play when the Patriots’ medical team examined his x-rays and stated he should be ok to pay.  This has been going on for three weeks.  The punting and kickoff (2 TDs) have been putrid since he has been out.  It is Reiss’ understanding that Bailey won’t make some performance incentives.  That means his contract is not guaranteed for next year, making it more likely he will be cut.  Jack Jones was late to the rehab sessions several times for which he was fined in accordance with the collective bargaining agreement.  Finally, when Jack Jones missed a session altogether, he was suspended.  This might be the case that Bill Belichick is trying to re-establishing his dominance on the team.  I liked what I saw from Jack Jones, but Bill Belichick won’t put up with this.

READ NEXT:
Monday Breakdown, Observations, Thoughts On The Patriots Loss To Buffalo
Posted Under: Patriots News