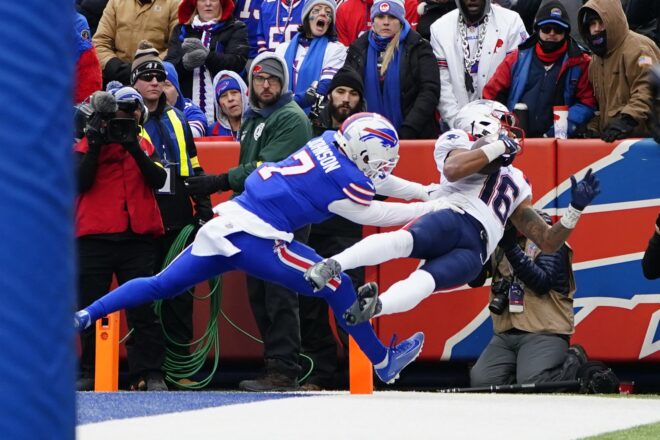 1) Sunday’s 35-23 loss in Buffalo ended up the way things have for much of the season for the New England Patriots. Bill Belichick put together a game plan that kept them in the contest until miscues and letdowns ultimately caught up to them and ended up costing them the game.

That’s basically been the story all season. Plenty of good, but just enough bad where they came up short, and some of it was self-inflicted.

It didn’t take long before things went wrong. It obviously started with the Bills’ Nyheim Hines returning the opening kickoff 96 yards for a touchdown, firing up a crowd that was already emotional over the events with Damar Hamlin, which has fortunately turned into a story of an incredible recovery.

But while the Bills dealt with something that was clearly terrible, it didn’t change the fact New England still had work to do.

Despite the explosion of excitement that could have set off a tough chain of events, New England didn’t fold. After the Patriots followed up that TD with a quick three-and-out, the defense stepped up and did the unexpected.

They forced a Buffalo punt on the Bills’ first offensive possession.

From there, Mac Jones took New England on an impressive scoring drive where they marched 74 yards on nine plays, finishing it off with a 2-yard touchdown pass to Jakobi Meyers.

That score knotted things up at 7-7, which set up a battle where the two teams slugged it out for the rest of the afternoon.

They went back and forth, with New England’s defense also making several big plays that offset some mistakes and kept things close. Jones had a solid first-half as New England took a 14-14 tie into the locker room at halftime.

Unfortunately, another kickoff return for a touchdown after the Patriots took a 17-14 lead in the third quarter gave Buffalo the momentum, and eventually, Buffalo pulled away late.

So close, but just not enough.

“Proud of the way our guys competed and prepared,” said a clearly dejected Belichick after the game. “But in the end, collectively, players, coaches, it just wasn’t good enough today.”

2) Sunday started out well for Jones. Despite a rough first series, Jones was sharp on the ensuing drive as he went 6-for-6 for 61-yards along with the touchdown to Meyers, and followed that up with another drive on the next possession where he went 6-for-6 for 49-yards, which included a 2-yard TD strike to Parker.

But the second half was a different story. Jones finished the afternoon with three interceptions, with his first coming on the opening drive of the second half. He started off 4-of-5 for 34-yards which, coupled with a 16-yard pickup by Rhamondre Stevenson, got them down to the Buffalo 21-yard line. But on the next play, Jones lofted up a deep pass to Nelson Agholor up the right sideline that he threw just short, with Agholor unable to fight off Tre’Davious White, and White came down with the turnover.

Fortunately, the defense forced an immediate turnover two plays later, causing Devin Singletary to cough up the football at their own 11-yard line. New England finished things off with a field goal to take the 17-14 lead, and things looked like they were going their way.

But the ensuing kickoff return for a touchdown put Jones and the offense back in a hole, and it didn’t get any better when Josh Allen hit a 42-yard touchdown bomb to John Brown on the Bills’ next offensive series. That seemingly put the game out of reach at 28-17.

Yet, Jones rallied. He put together an 8-play, 85-yard drive that ended with a great throw from Jones to Parker for 26-yards and a touchdown, which cut the lead to just five points at 28-23.

Unfortunately, Allen did what Allen does, and he managed to make an unreal throw under pressure on a 3rd-and-10 where Stephon Diggs got behind Jonathan Jones for a 49-yard touchdown grab, and the Bills were back up by two scores.

Jones and the offense seemingly caught another break after they went three and out on the next possession, with Matthew Slater baiting Taiwan Jones into touching the football on the punt and New England recovered at Buffalo’s 35-yard line.

But Jones and the offense couldn’t cash in. After getting the Patriots down to the Buffalo 13, the officials called Hunter Henry for offensive pass interference on a call where Henry appeared to simply be fighting to get into his route, which backed them up and ultimately put them in a 3rd-and-19.

Down two scores, instead of settling for a field goal, Jones tried to make a play by taking a shot to Henry in the end zone. Jones wisely threw it high where only Henry could get it, but the pass sailed and it went off Henry’s hands and Buffalo’s Matt Milano came down with it for the interception.

His final pick came on the next series where he was under pressure and threw a pass that went off of Damien Harris’ fingers into the hands of Tremaine Edmunds.

That sealed it, and this one ended like several others this season. They were so close, but just couldn’t overcome the hole they dug themselves.

Overall, Jones finished 26-of-40 for 243 yards, along with three touchdowns and three interceptions. What started out as a potential breakout performance saw Jones come up short, and he was disappointed with how things turned out.

“Proud of the guys, wouldn’t trade them for anybody,” said Jones after the game. “Great people in that locker room. Just wasn’t our day and we’ve got to have a better result than that. But we fought hard, and it’s tough.” 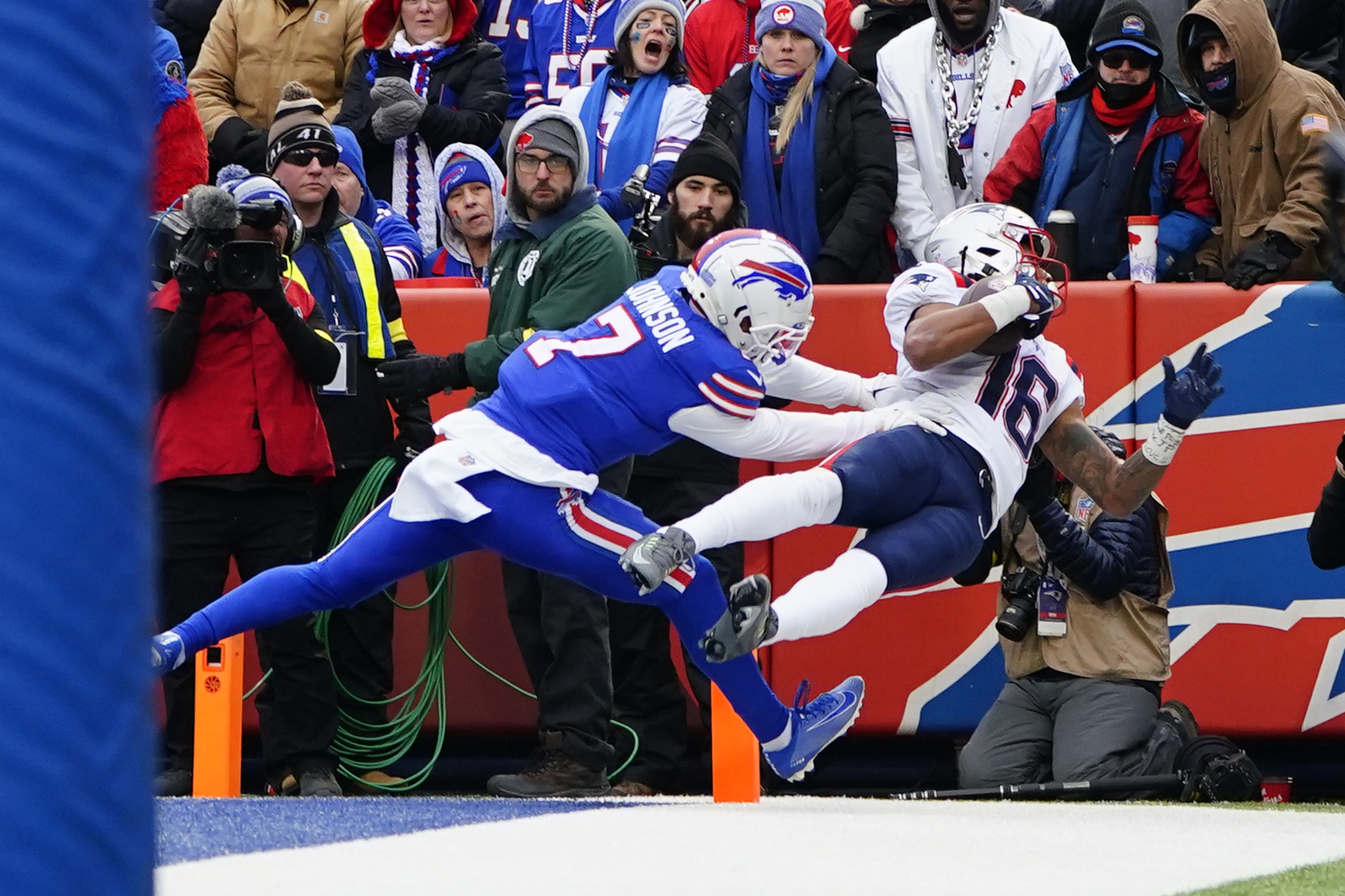 The offense held its own on Sunday. (PHOTO: Gregory Fisher-USA TODAY Sports)

3) Sunday also marked potentially the end for Devin McCourty and Matthew Slater, who seemingly played their final games with the Patriots. Slater was frustrated with this one after it was over, while McCourty made a couple of nice plays, including an interception and a fumble recovery to end what could have been his final game on a decent personal note.

“It didn’t hit me until sitting there, and they’re taking a knee, of just the emotions of everything that comes in, and you go through through a season, not knowing your future,” said McCourty after the game. “I just said to myself today to just go out there today and give it my all, see where it got me.”

Slater was emotional after the game, blaming himself for the two huge kickoff returns that clearly had a big impact on this one.

“It’s a lot going through my mind,” said Slater after it was over. “Obviously disappointed with how the kicking game went today. I’m just a little bit shell-shocked. So, trying to process that. I just feel like we didn’t give our team a chance to win the game and that’s very disappointing. So I think that’s what’s on my mind the most right now.”

“As the captain of that unit, I feel like we cost the team the game. So it’s very difficult.”

Slater wouldn’t talk about his future, not wanting to make any part of the press conference about himself. But wiping away tears, Slater made it clear he was proud of all of the years with the club.

“I’ve given it everything I’ve had,” said Slater. “My dad told me when I was young if I was going to play the game, that there was a certain way to play it, a certain way to go about it. I tried to make him proud. Represent his name the right way because that’s how he did it and that’s what it’s always been about for me.”

4) One player whose future is also in doubt is Damien Harris, who overall did a good job on Sunday. He carried 13 times for 48-yards, including a 19 yard run that played a role in Parker’s touchdown.

Harris has been dealing with injuries for much of the season, which has kept him out until the last couple of weeks. Sunday saw him see a fair amount of action, giving the Patriots some great balance as both he and Rhamondre Stevenson kept hammering away at Buffalo’s defense.

Save for the kickoff returns, they definitely had a great shot and he played a big role. With the offseason now upon us, it’s going to be interesting to see if this was Harris’s last game in New England.

He’s set to be a free agent after this season and all indications seem to point to the two sides parting ways, at least based on his reduction in playing time in favor of Stevenson.

Whether or not that ends up being the case will be one of the stories of the offseason. He and Stevenson are certainly a formidable pair, but it looks like Sunday might have been the last time we might see the two together. 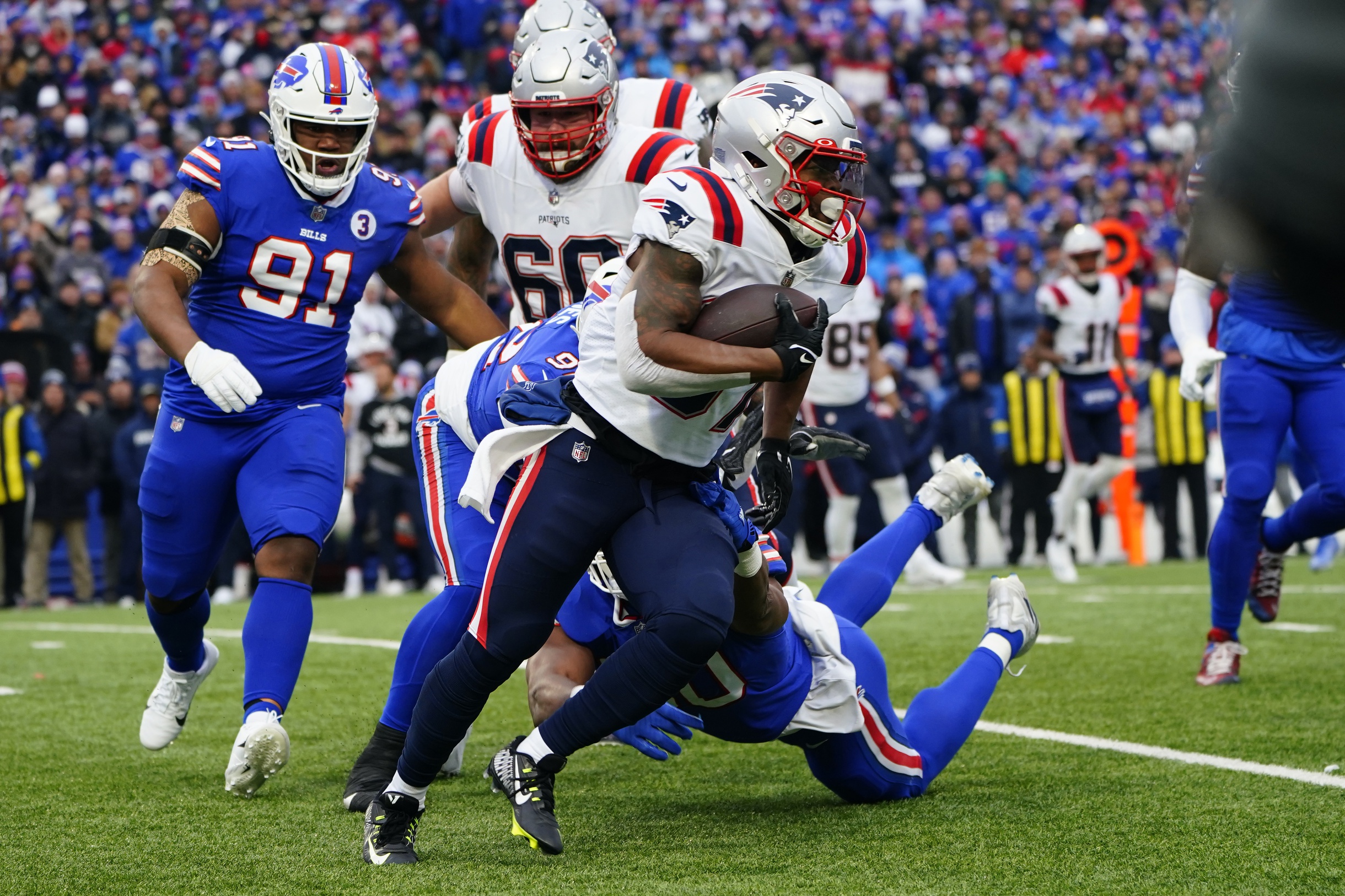 Is this the last we’ll see of Harris? (PHOTO: Gregory Fisher-USA TODAY Sports)

5) One of the things that was really impressive on Sunday was the fact the Patriots really did a great job of both containing Josh Allen and not letting up, preventing him from taking over the game with his legs.

The Bills quarterback clearly gave them problems the first time around, but this time New England’s defense really kept him in check and didn’t let him get outside. When he did, they stayed with him and finished, wrapping him up and finishing the play, which was really impressive.

Their effort was one of the main reasons why the Patriots kept this one as close as it was, which was a giant step forward from where they were a year ago. When you take out the two special teams breakdowns, they held Buffalo to just 21 offensive points, which is a major deal for a team as explosive as they are.

One year ago, they couldn’t get off the field or create a turnover. On Sunday, they forced two punts and created multiple turnovers against a team that will likely be one of the final teams standing in the AFC.

That’s a solid step forward and the increased speed on that side of the football from a year ago was definitely noticeable.