4 weeks ago at 7:16 am ET
Follow @SteveB7SFG
Posted Under: Patriots Report Card 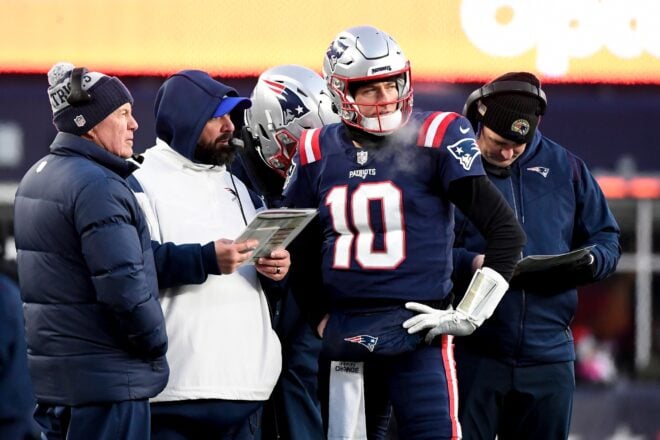 The Patriots followed a familiar M.O. in their loss to the Bengals on Christmas Eve in Foxboro. Mental mistakes, penalties, and poor situational football doomed them to another loss, which probably knocked them out of any possibility of making the postseason.

While mathematically, they are still very much alive, especially with Miami’s loss to Green Bay on Sunday, the possibility of beating both Miami at home and Buffalo on the road right now looks pretty remote.

This was a tale of two halves. In the first, Joe Burrow eviscerated them, passing for three TDs and 284 yards, doing almost anything he wanted. Cincinnati rolled up 303 yards of offense in the first half. The 22 points were on three TDs, but they missed an extra point and then failed on a two-point conversion.

The Patriots, as a team, were absolutely terrible in the first 30 minutes defensively and about 40 minutes offensively. But then everything changed with a pick-six of Burrow. And then, offensively, they began to move the football by leaning on Kendrick Bourne.

But a fumble on the Bengals’ five-yard line ended their comeback bid to score the go-ahead TD with 55 seconds to go.

Once again, Mac Jones started the game horribly, the “short, quick” game fooled no one, and the receivers weren’t getting open. The OL wasn’t doing much to help matters, either. The offense looked listless, dead, and frankly embarrassing.

Jones played much better in the second half. His best pass of the day was dropped. Tyquan Thornton had broken away from coverage and was open about 40 yards down the field. Jones dropped a perfect dime right in his hands. As he was going to the ground, the ball came loose.

Rhamondre Stevenson is IMO the best player on the offense. But he couldn’t get anything going, rushing for only 30 yards on 13 carries. He had a drop in the passing game, and his fumble, after the Patriots had a 1st and goal at the five-yard line with under a minute to go, was an absolute killer.

The WRs were led by Kendrick Bourne, who had his first career 100-yard game (6-100 with a TD).  In the first half, Bourne added 29 yards rushing on one carry (a Jet Sweep). It was a great game for someone who has been in the doghouse all season. His best catch was a beautiful toe-tapping throw and catch where he was initially ruled out of bounds. But was overturned on a challenge. Perhaps he’s finally out of the doghouse?

Jakobi Meyers had six catches for 83 yards, including a 48-yard TD where Jones threw a bomb to Scotty Washington in the end zone, but he tipped it right to Meyers.

The Patriots’ tight ends were banged up in this one. Hunter Henry left early in the game with a knee injury and didn’t return. We’ll have to check on his availability in the last two games. Jonnu Smith had three catches for 21 yards. But on his last target, he was rocked (totally legally) on two sides by defenders who knocked the ball out of his hands. He left with a possible concussion and didn’t return.

The Patriots’ offensive line fell back into their normal M.O. of not opening holes in the running game. The team rushed 16 times for only 61 yards, averaging just 3.8 yards per rush. The pass protection wasn’t much better, as Jones was sacked 4 times and hit 7 more.

Jones was forced to scramble far too often for someone whose strengths don’t include running with the football.

The Patriots defensive line was part of the defense that was gashed in the first half. But after jumping out to a 22-0 first-half lead, their plans to lean on Mixon in the second half didn’t materialize. Mixon rushed 16 times for 64 yards (4.1 avg) but never took over the game and was for most of the 2nd half.

Overall the Bengals rushed for just 73 yards and averaged just 3.0 yards per carry. The re-energized DL was a good part of the unit that shut out Cincinnati’s potent offense and held them to just 22 points overall.

The linebackers were a big part of the defensive turnaround in the second half. Matthew Judon and Josh Uche each had a sack, a QB hit, and a tackle for loss. Judon also anticipated a pass in the flat and then forced a fumble.

Ja’Whaun Bentley had another big game with 12 tackles and had a pass defensed in the end zone. Jahlani Tavai had eight tackles playing tough inside.

The Patriots’ secondary much like the entire team, had an up-and-down game. In the first half, Cincinnati used a big-size advantage that they utilized to carve the Patriots up in the first 30 minutes. Tee Higgins (6’3) made life difficult for Marcus Jones (5’9), especially in the first half. He finished the game with 8-128 and a TD. Ja’Marr Chase added 7 catches for 79 yards.

But they made adjustments where Burrow had too easy short throws underneath when the team was in zone coverage; they changed things up. In man coverage, the size advantage was negated a bit when they began blitzing more.

It was one of those plays where Kyle Dugger forced Burrow to unload early, where Mr. Do Everything (Jones) picked off the pass and returned it 69 yards for a TD that changed the entire complexion of the game. Devin McCourty also had an INT in the first half. The secondary was a big part of the defense that held Burrow to 91 yards and 0 points in the second half.

Saturday was a disaster for the Patriots STs. Nick Folk missed both of his extra-point tries, with the wind a huge factor. Cincinnati’s Evan McPherson missed an EP and an FG attempt.

Daniel Ekuale had a personal foul on an extra-point attempt by the Bengals. Michael Palardy dropped a snap on a punt before he kicked it (barely) for only 23 yards, which also caused an ineligible man downfield. And Marcus Jones muffed a punt out of bounds when the Patriots needed a big return in the game’s final minute.

During our podcast last week, I mentioned that the way the Patriots lost to Las Vegas would be tough to shake. In the first half, it absolutely appeared that the team had cashed it in on the season.

But the coaches made adjustments, and the players executed much better, making the game competitive, where they had a chance to win the game in the final moments. But STs hurt the grade, as did the decision to run the ball four straight times down the stretch.

While the strategy to kill the clock and score, thereby denying the Bengals a chance to score, is entirely a sound one, with the team being the worst red zone scoring offense in the league, you have to focus on scoring first and put the clock as secondary. Especially on a day that Stevenson was only averaging 2.3 yards per rush. 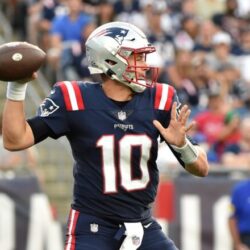 By: Steve Balestrieri
He's very well-versed in the fundamentals and schemes. He does a good job. Really glad we have him." Bill Belichick on DeMarcus Covington.
19 hours ago 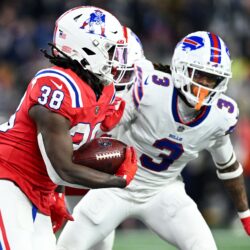 By: Robert Alvarez
Check out these highlight videos covering the best plays from four of the Patriots' best players during the 2022 season.
2 days ago 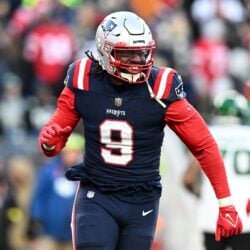 By: Robert Alvarez
Matthew Judon attempts to recruit Aaron Donald to the Patriots following recent rumors the All-Pro defender was looking to leave LA.
2 days ago 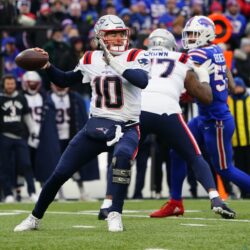 By: Robert Alvarez
Mac Jones reflects on the 2022 season over Instagram, his teammates voice their full support in the comments.
2 days ago 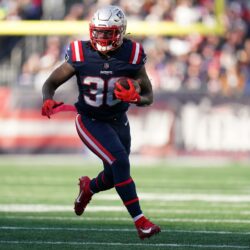 By: Mark Morse
This week I will start my New England Patriots team analysis on the running backs.  As a whole, the group performed very considering there were…
3 days ago
wpDiscuz