1 month ago at 9:29 am ET
Follow @MarkMorse5
Posted Under: Patriots News 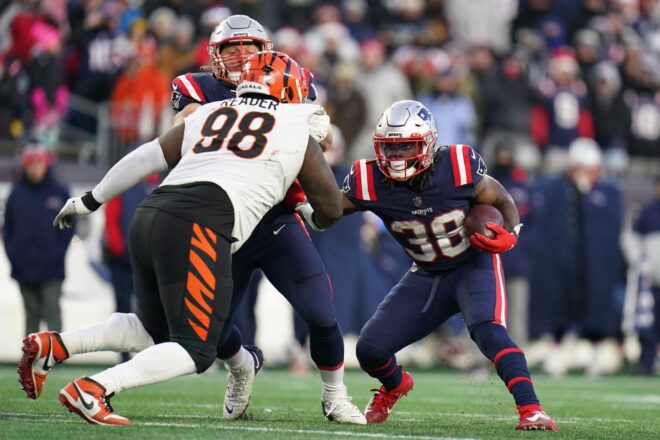 In Matt Judon’s post-game press conference, he emphatically stated that “We did not quit”.  I was impressed by the Patriots’ comeback near victory against a very good Bengals team.

The Defense turned things around and shut down the Bengals in the second half.  Marcu Jones’ 69-yard Interception return for a TD seemed to wake up the team.

No, they didn’t quit, but they didn’t get rewarded either.  According to Mike Reiss who served as the pool reporter with the referees after the game.  He asked about forward progress and this is what the cowards had to say!  “In order to have forward progress, the runner has to be controlled by the Defense.”  Rhamondre Stevenson was going backward and in the control of the Bengals’ D Lineman.  “He has to be held and controlled, basically have his feet taken away.  We felt that he still had his feet. So we did not feel he was held and controlled by the Defense.  He was still free to gain yardage and then also, obviously, there was still the chance that he could fumble.”

Let me get this straight.  If a defense doesn’t wrap up his feet, then they are free to strip the ball away despite the fact the play is over because the runner is going backward and his forward progress has been stopped.  That was forward progress and the play should have been blown dead.  I am sick and tired of officials inserting themselves into the final outcomes.  That game was a terrific Patriots victory snatched away by ineffective officials.

Stevenson also had the 1st down on a critical play at the end of the game.  He was over the yard to gain by nearly a full yard when his knee went down.  This play was reviewed by New York and they got it wrong too.  What incompetency!    What about the Bourne toe tap on a sideline catch?  That play was an obvious catch but it took a Belichick Challenge to rule it a completed catch.  Why did the Patriots have to use one of their challenges to correct a blatant mistake by the officials?

The final blown call was against Josh Uche for hands to the face.  All the official saw was Uche’s hand in the O lineman’s face.  He didn’t see the O-lineman pushing up Uche’s arm so that his hand was in his face.

Why isn’t the media taking on the league, where Coach Belichick cannot complain, on this bad officiating?  That’s back-to-back games where the officials decided who would win.

The Patriots lost both TEs during the game.  I don’t know who ran the wrong pattern, but why were the two TEs in the same area, close enough to collide together and knock out Hunter Henry?  That’s just embarrassing.  Bad play design, bad coaching, and terrible execution.