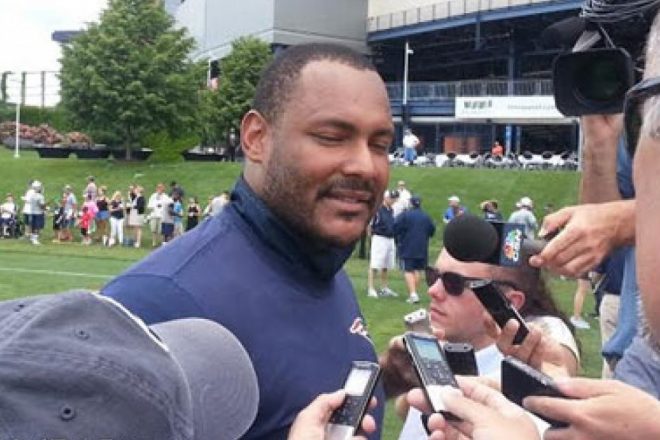 It’s another weekend that, as usual, went by far too quickly.  Good luck to everyone as we all get set to battle through the next five days, and now we’ll kickoff this week’s first edition of the rundown:

Former Patriot Killed – Some sad news out of New Orleans on Sunday after reports came out in regards to a shooting Saturday night that sadly involved former Saints defensive end Will Smith and his wife, with Smith ultimately passing at the scene.

The attack allegedly stemmed from road rage after the shooter, Cardell Hayes, rear-ended Smith. The details are a little hazy, but apparently Hayes rear-ended Smith’s Mercedes Benz SUV with his Hummer H2, and as a result Smith slammed into the car in front of him.  From there the two exchanged words and then Hayes reportedly shot Smith multiple times, and Smith’s wife also was shot in the leg during the altercation.

She survived, but Smith didn’t.

The other disturbing part of this is the fact the Times-Picayune published photos on their site, which as of the writing of this post are still there, where Smith is dead in the vehicle and you can clearly still see his arm behind the steering wheel.  According to the article the shooting took place around 11:29pm, and he was removed from the scene around 2:45am.  Being as the internet lives on in infamy, those are haunting photos for anyone who knew or loved him, so it’s surprising they didn’t take that into account.

Smith, who was just 34, leaves behind his wife and three children, and by all accounts was an active member of the community and even had a foundation in Utica called, “Where There’s a Will There’s a Way”, which according to their website, “aims to motivate, educate and provide opportunities for women and youth.”

The former Saints defensive tackle had more charity work planned and reportedly had planned to return to Utica this week for a football banquet he had sponsored for the last seven years. 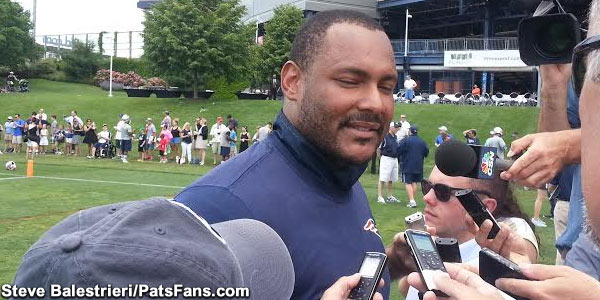 Here is Smith, with this photo taken by our own Steve Balestrieri during mini-camp in 2014.

Smith was originally selected 18th overall in the 2004 NFL Draft and spent nine seasons in New Orleans before a knee injury sidelined him for the 2013 season.  He was signed by New England on May 5, 2014 and one month later, as the offseason practices were in full swing, Smith was excited to be a Patriot.

“My main goal now is just to go out, get back in football shape, make sure I know the playbook in and out,” Smith told the Boston Globe following a Wednesday practice.

“Obviously I’m feeling pretty good. I had a full day of practice.  It doesn’t bother me. I’m ready to go.”

However, it wasn’t meant to be and he was released on August 24, 2014 and didn’t make the team.  But he wasn’t forgotten by any means and he made his presence felt in the locker room, with the sorrow of his loss expressed by several Patriots players, including Rob Ninkovich and Jerod Mayo, who each Tweeted their condolences on Twitter.

It’s just a senseless loss, and as a result a wife lost her husband and three children now no longer have their father.  Just really, really sad.

Judge Nixes Patriots Fans’ Lawsuit – Much has been made of the lawsuit launched by seven Patriots fans who were hoping to at least get an injunction to prevent the loss of the Patriots’ first round draft pick, but it looks like that isn’t going to happen.

The group was seeking a temporary restraining order and a preliminary injunction that would have restored the pick in time for the draft, which is set to be held on April 28th. Instead, U.S. District Court Judge F. Dennis Saylor denied the motion on Friday, saying they didn’t have enough ‘factual content’ to allow the court “to draw the reasonable inference that the defendent is liable for the misconduct alleged.”

In the motion from Saylor, he also pointed out that the “federal courts are courts of limited resources, funded by the taxpayers, and it would not be a prudent expenditure of those resources to permit the motion to progress to the hearing stage.”

Carey is likely hoping that there won’t be any financial backlash, although the league could choose to make an example out him, which could be the remaining part of this story that ProFootballTalk.com suggests, might not be done with just yet.

For now, you can read the full response by the judge here.

Another Navy Guy On the Way? – In his Sunday notes ESPN Boston’s Mike Reiss reported that Bill Belichick was on hand on Thursday at the Naval Academy taking a closer look at quarterback Keenan Reynolds, who was reportedly put through a private workout with Josh McDaniels.

They’ve also apparently put in prior visits with Reynolds, which given the selection of long snapper Joe Cardona in the fifth round of last year’s draft has to make you wonder if he could be on their radar and where exactly they might take him if the opportunity arises.

The Boston Herald’s Jeff Howe caught up with Reynolds last week and the quarterback admitted that would be a scenario he’d be O.K. with.

“I’ve definitely thought about it,” Reynolds told the Herald last week. “My friends have said things to me about it. To get that phone call would be — I’d be speechless, honestly. I probably wouldn’t know what to say.”

What’s most interesting about Reynolds is he’s a terrific athlete, which given their success in moving Julian Edelman from quarterback to receiver, might open up an opportunity for a similar transition with Reynolds. Some scouting reports felt he should have been a Heisman contender for his consistent play and believe Reynolds could be a potential NFL running back or slot receiver. Given the attention they’ve already paid to him, it certainly makes you wonder what Belichick might have in mind for the Navy standout.

Now he’ll likely spend the next few weeks wondering if his phone will ring that weekend and if it will be Belichick who will be on the other line.

The National Football Post reported that the Patriots held a private workout with Davis and after the workout, Belichick reportedly spent ‘a significant amount of time’ breaking down film with him.

Davis has been a busy guy, with the website pointing out he’s participated or lined up visits, private workouts or private meetings or dinners with 18 teams.

He had 88 tackles along with three interceptions last season. He also forced five fumbles.

Gronk Being Gronk in a Parody and Freestyle Rapping – We’ll leave you with a couple of funny things in the event you missed them. The New York Post pointed out a parody trailer of what would have been a movie from the book series “A Gronking to Remember” involving him and the girlfriend of a fan’s fantasies about the tight end.

Gronk took part in a parody trailer for a potential film, which appeared on “Funny or Die”, which you can see below:

Gronk also appeared in a video over the weekend from a charity event and he apparently didn’t know the words to Vanilla Ice’s “Ice, Ice Baby”.