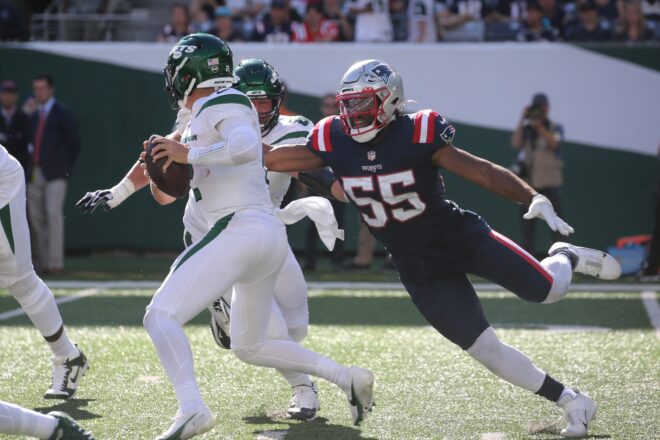 New England Patriots linebacker Josh Uche has put together a career year and has earned his first honor from the NFL.

For his performance against the Arizona Cardinals, Uche was named the AFC Defensive Player of the Week on Wednesday.

In the win, Uche recorded his second 3-sack game of the season and now has a career-high ten sacks. Uche also registered three sacks against the New York Jets on Oct. 30 and is the only player in the NFL with multiple three-sack games this season.

Uche joins Andre Tippett and Mike Vrabel as the only players in franchise history with multiple 3-sack games in a season.

Before this season, Uche had struggled with injuries over the first two years of his career, recording just four sacks in 27 total games heading into week eight. Uche’s ten since that time are the most by anyone in the NFL.

“The biggest thing with Josh is just him being out there. He’s always put good plays on film and good plays on the practice field. He’s flashed. This year he has been out there on a consistent basis,” head coach Bill Belichick said Wednesday.

“That’s allowed him to continue moving ahead. Build on his repertoire, build on his communication, and execution with his teammates on pass rush games and drops into coverage, which he’s involved in, to a degree. Just doing it day after day and week after week piles up. It makes you that split-second faster.”

Linebacker Matthew Judon, who shares the defensive line with Uche and is tied for the league lead in sacks with 14.5, issued a warning for opposing offenses after the win Monday night.

“I told y’all I wasn’t the best pass rusher,” Judon told reporters. “And our best pass rusher is emerging. People are going to have to block him. If they don’t and they chip my side and they worry about me, Uche will do that every week. I just love the way he’s playing with confidence and poise. This is the most he’s played since he’s been in the NFL, so it’s taking a toll on him, but he’s going out there and he’s having a lot of success.”

The AFC Defensive Player of the Week 💪@_Uche35 | #ProBowlVote pic.twitter.com/0DiViN21rD

The NFL announces Josh Uche is the AFC Defensive Player of the Week for his three sack performance against the Cardinals. He also had a pressure that led to an INT