2 months ago at 11:07 am ET
Follow @IanLogue
Posted Under: Patriots News 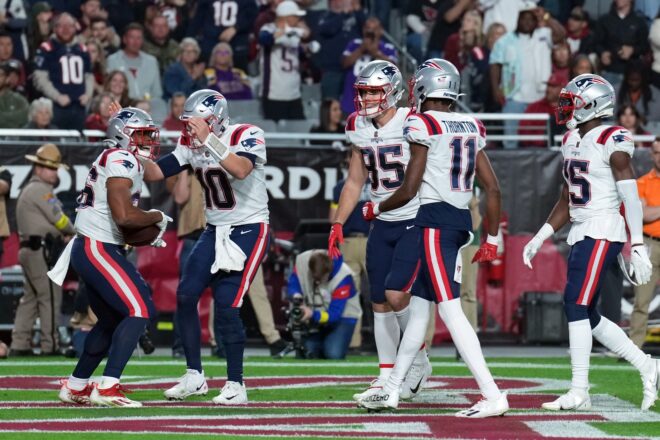 1) New England Patriots quarterback Mac Jones started off slow but ended up with a fairly solid outing, with Jones doing a decent job of adjusting to an extremely aggressive Cardinals defense.

They came after him for most of the night, especially early in the contest.  They made life tough during New England’s first couple of series, forcing a batted throw along with an interception, which was the second one Jones has thrown since coming back from his injury that happened where he was hit as he threw.

The turnover came after Hunter Henry got overpowered while Jones was trying to throw downfield.  On the play, Jones was trying to connect with Nelson Agholor, who had gotten past defensive back Marco Wilson.  But linebacker Cameron Thomas drove Henry back and then got outside and was able to swat at Jones’ arm and disrupt the throw as he released it.

The ball fluttered in the air, and linebacker Isaiah Simmons came up with the turnover.

But Jones settled down from there.  He missed only four throws in the second quarter and then went on to miss just four over the entire second half, finishing the night 24-of-35 for 235 yards.

Like last week, this one had some fireworks between he and Matt Patricia.  During one stretch where the two seemingly had some communication issues, Jones waved him off, went back to the huddle, and instead called the play, with cameras capturing the exchange.

Jones downplayed any friction after the game, with the two later being spotted laughing and hugging things out after a scoring play.  As a result, the drama was, again, short-lived.

All-in-all, after a shaky start, it was good to see him overcome a fair amount of adversity in a game they absolutely had to have, and it’s starting to feel like he’s beginning to build a little momentum heading into these final few games.

2) Injuries ended up being a big story Monday night, with an already depleted Patriots team having to overcome a fair amount of personnel losses in this one.

Both DeVante Parker and Rhamondre Stevenson went down with injuries in just New England’s second series Monday Night, which given that they were already down Damien Harris and Jakobi Meyers certainly made things challenging.

Parker seemingly suffered a concussion after he caught a 7-yard pass on a 2nd-and-6, but defensive back Antonio Hamilton hopped on his back and drove Parker’s head into the ground, leaving the veteran receiver clearly disoriented as he tried to stand.

Teammate Nelson Agholor was concerned, and they would end up using a timeout after he frantically signaled to New England’s sideline that Parker needed to come off the field.  Agholor put his arm around Parker and walked him over to the sideline, with trainers then taking Parker to the medical tent.

Two plays later, Stevenson was hit hard on a 3-yard run and twisted around with a defender on his leg, with the running back writhing in pain after the play with an apparent ankle injury.  He left but came back two series later after getting his ankle taped, although his gutsy attempt was short-lived and he didn’t finish the game.

They also lost rookie Jack Jones, who suffered an injury to his right leg.  He was spotted on the sideline riding the stationary bike but was unable to finish.  He played just eight snaps and missed the rest of the contest.

Veteran Devin McCourty was also injured Monday night, with Deatrich Wise Jr. inadvertently hitting his teammate as they were trying to bring down quarterback Colt McCoy on a 4th down play.  McCourty’s head was bent awkwardly on the play, with the veteran also pointing to his shoulder as he walked off the field.

The Cardinals didn’t fare much better and suffered their own significant loss after losing starting quarterback Kyler Murray just three plays into the game after Murray took off around the right side and as he went to cut, he collapsed to the turf.  Matthew Judon, who was right there in pursuit of Murray, immediately signaled to the Cardinals sideline when he realized the extent of Murray’s injury.

Overall, it was a frustrating night from that standpoint, and it certainly complicates things a bit heading into Sunday’s showdown against the Raiders.

3) With all the personnel losses, the one bright spot was the fact it forced rookie running backs Kevin Harris and Pierre Strong Jr. into an expanded role and the two definitely delivered.

Harris had some strong runs while filling in, including a terrific run of 14 yards that he took into the end zone on New England’s first touchdown of the night, which gave them an early 7-3 lead.  He carried the football eight times for 26 yards, along with his touchdown.

Strong Jr., who was the fastest running back in the 2022 NFL Draft, also had a big night.  He showed off his speed at one point after breaking off a 44-yard run early in the third quarter that helped the Patriots knot the score at 13-13 after Nick Folk finished things off with a 23-yard field goal.

He also added a touchdown run of his own at the start of the fourth quarter, which came after a 39-yard strike from Jones to Henry, with Strong Jr. taking it in from 3-yards out.

That score essentially sealed it at 27-13 as it put the Patriots up by two touchdowns and put the game out of reach for Arizona.

Strong finished the night with 70 yards rushing on just five carries, with the former South Dakota State running back providing a much-needed spark after Stevenson went out.

“It was great,” said Bill Belichick of the performances of his two running backs after the game.  “They got an opportunity and made some big plays. We’ll see if they can sustain it, show up week after week, and people will start looking for them.”

Given all the injuries, it’s surprising how deep the Patriots are at that position and with Damien Harris set to be a free agent after this year, should they lose him, the future looks bright given who they have behind him.  The bigger question right now is going to be Stevenson’s status heading into next weekend, which will definitely be something to keep an eye on. 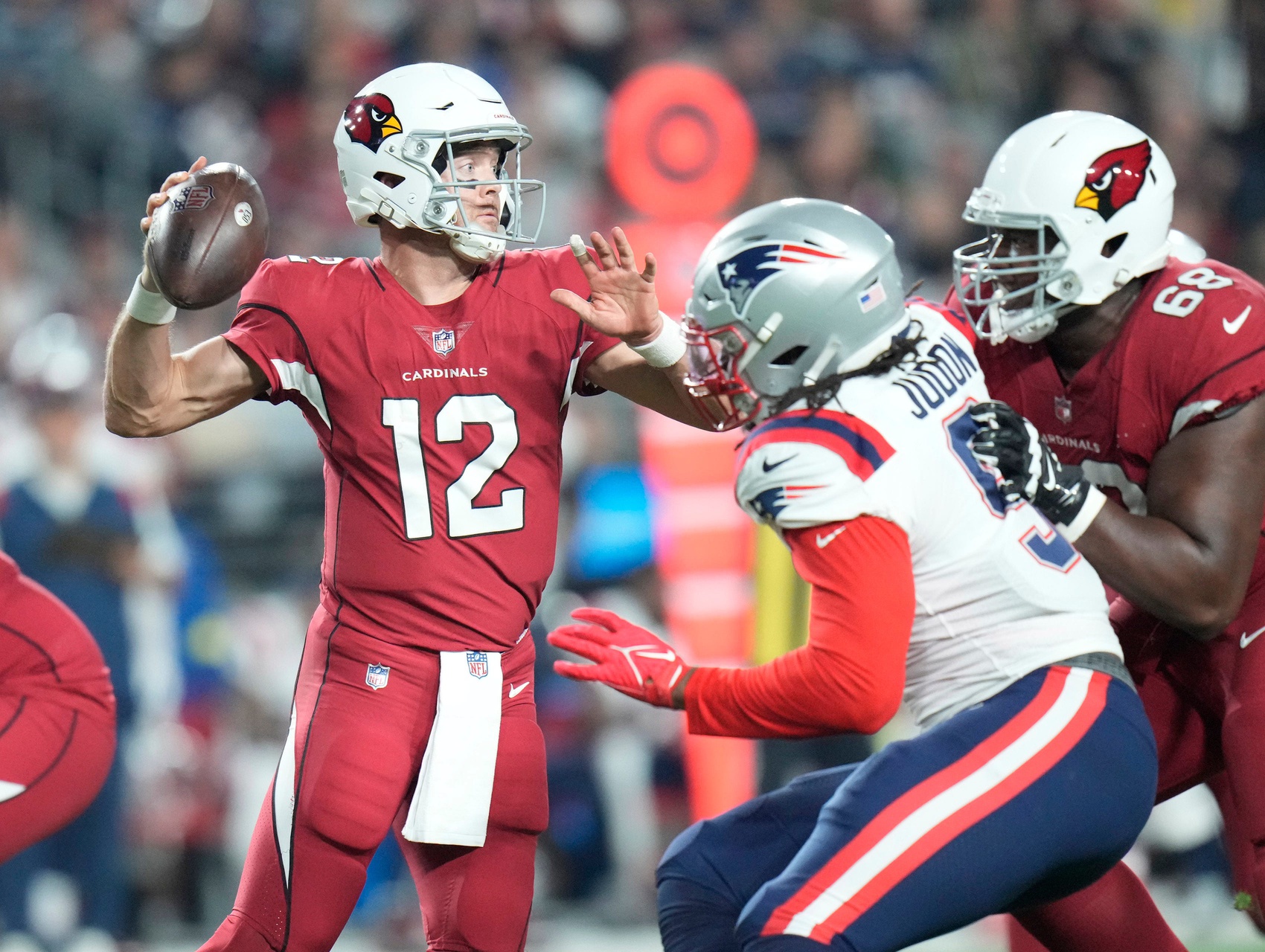 The defense got after McCoy all night. (PHOTO: Michael Chow / USA TODAY NETWORK)

4) New England’s defense stepped up Monday night against a surprisingly good Cardinals offense.  With Murray lost for this one, back-up quarterback Colt McCoy played well and made things tough until things started getting out of hand.

They sacked him six times in this one, including five in the fourth quarter as both Matthew Judon and Josh Uche each had a field day bringing him down late and slamming the door on any hope Arizona had of getting back in the game.

Uche finished the night with three sacks, while Judon had 1 1/2 (he split one with Laurence Guy), and Daniel Ekuale also had one.

New England also managed one defensive touchdown in this one, with DeAndre Hopkins losing the football deep in his own end after Kyle Dugger knocked the ball out of his hands.  Raekwon McMillan scooped it up and took off 23-yards for the touchdown, which at the time broke a 13-13 tie and put the Patriots ahead 20-13 with just 5:32 left to go in the third quarter.

“We take a lot of pride,” said Uche after the game. “Anytime the defense can put up points on the board it’s demoralizing to an offense. It’s a momentum changer and it just fires us up. It fires the offense up and everyone is just back in the game, so it’s definitely a great feeling.”

They also came up with an interception on McCoy on the ensuing possession, which led to Strong Jr.’s touchdown run.

That’s the type of night they needed and it was great to see a collective effort on that side of the football.  Uche has been gaining quite a bit of momentum of his own in recent weeks, and it’s certainly coming at the right time.

5) Meanwhile, with so many guys banged up on the offensive side of the football, the Patriots needed Agholor to step up and he didn’t answer the bell.

Jones targeted nine different receivers Monday night, with Jones missing on just one throw to all of the players he completed at least one pass to, with Agholor being the lone exception.

Here’s a quick look at the receiving totals:

Obviously, the numbers to Smith are disappointing, albeit Jones did have a throw to him on a screen that was off the mark, while his other target was the one that was batted down.

But with Agholor, who was targeted 10 times and caught just five of them, it was frustrating.  The veteran had several drops in this one, including a deep play up the left sideline where he went up over his defender and had the ball in his hands but couldn’t make the play.  He also had an earlier throw where Jones hit him in the numbers and he couldn’t hold on.

He’s had a disappointing season, and with the Patriots heading into some critical games over these final four weeks, he’s long overdue as someone who needs to step up.

While it wasn’t pretty, a win is a win and the Patriots find themselves sitting in the driver’s seat with the final playoff spot as well as getting out of the cellar within the AFC East.  For now, they’ll turn the page and spend the rest of the week out in Arizona, preparing for Sunday’s showdown in Las Vegas against Josh McDaniels’ Raiders.

READ NEXT:
Observations From a Disjointed Patriots’ Win in Arizona
Posted Under: Patriots News
Tags: 2022 Patriots Season Patriots vs Cardinals