1 week ago at 9:17 am ET
Follow @SteveB7SFG
Posted Under: Patriots Commentary 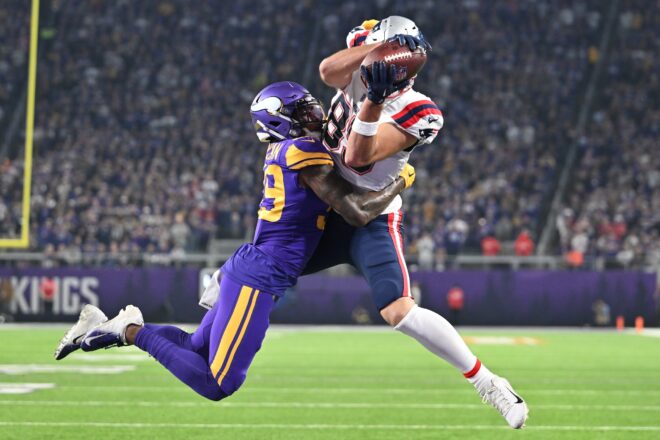 Good morning; we hope everyone had a happy and safe Thanksgiving Day.

The Patriots lost to the Minnesota Vikings 33-26 on Thanksgiving Night in a game where the team’s mistakes were critical in the loss. The score was bouncing back and forth all game long. Justin Jefferson of the Vikings had a tremendous game, and he opened up avenues for the other receivers to make big plays. And the Vikings made a couple more plays than the Patriots did.

The loss overshadowed a big game from Mac Jones, who operating from a clean pocket for much of the game, passed for nearly 400 yards. He was able to go through his progressions and push the ball down the field.

The Patriot Defense Struggled: The defense was unable to generate any kind of pressure on Kirk Cousins, who had a big game, passing for 299 yards and completing 30-37 passes with three touchdowns and one INT for a passer rating of 116.1. The one interception the defense got was the result of pressure forcing Cousins to sail a throw that was intercepted by Jon Jones.

But the run defense was excellent. Minnesota rushed 27 times for just 57 yards (2.1-yard average). Dalvin Cook was held to 42 yards on 22 carries for a 1.9-yard average. But the Vikings dominated time of possession by virtue of their passing game. With that thought in mind…

Jon Jones and Myles Bryant Had Rough Nights: Jones had the unenviable task of matching up with Jefferson, one of the league’s most dynamic receivers. Jefferson got the better of Jones and the rest of the secondary all night long, although Jones did get an interception of Cousins after Daniel Ekuale brought pressure up the middle and returned it 55 yards.

Jones also had two face mask penalties on Jefferson, which hurt the defense by extending and furthering Minnesota’s drives. Bryant fell down on a crosser, allowing a big gain. And then he was flagged for a personal foul penalty while Thielen was on the ground for targeting his head and neck area.

Mac Jones Has a Career High Passing Day: Jones’ most productive day of the season (and his career) clearly shows what can happen when he’s allowed to operate with a mostly clean pocket all game long.

Jones completed 28-39 passes for 382 yards with 2 TDs and 0 INTs for a passer rating of 119.8. He should have had a third TD pass to Hunter Henry on a 3rd and goal from the 6-yard line, but the TD call was overturned (more below).

One could tell that the game was going to be different for Jones when he led the team on an 8-play, 75-yard opening drive touchdown capped off with a 34-yard touchdown strike to Nelson Agholor for the first Patriots TD in the 1st quarter this season.

Offensive Line Play Much Improved: Jones has been under siege all season with little time to go through his progressions. But last night, the offensive line, patched together due to injuries, provided Jones with the best protection he’s had all season.

The Patriots only ran the ball 13 times in the game, a curiously low number, especially with Minnesota dominating time of possession. But for the most part, Jones was able to step up in the pocket and look for plays down the field.

Jones had plenty of chunk passing plays, the 34-yard TD to Agholor, a 37-yard TD to Hunter Henry, 40-yard pass plays to DeVante Parker and Rhamondre Stevenson, and a 26-yard pass to Jakobi Meyers. It is amazing what the offense can do when the QB can do when he has time to throw.

Special Teams Letdown: The loss to the Vikings was in large part to the Special Teams, normally a big strength of the team, First, they allowed a 97-yard kickoff return TD by Kene Nwangwu right after the Patriots had double-dipped scores at the end of the first half and the beginning of the third quarter. Yes, the officials missed a holding call that helped spring the return (more below), but they should have still played that return better.

Pierre Strong prolonged a Vikings drive by running into the punter on a 4th and 4. That ended with the Vikings scoring the game-winning TD on a pass from Cousins to Thielen.

Michael Palardy, who had a big game in the swirling winds of Gillette last week, had one excellent punt of 56 yards and then two stinkers of 36 and 31 yards, respectively, indoors. Nick Folk was back to his automatic ways, going 4-4 on FG attempts with a long of 46 and 2-2 on extra point attempts. Marcus Jones had another stellar return of 46 yards. But they were the bright spots as the STs units were off

The Officiating Was Terrible, But…: And the now for the elephant in the room. The officiating crew of Alex Kemp was terrible in this game, but despite several of the calls only going one way, the team has to work through it.

The holding on the TD return was right where Nwangwu made his cut to the outside, where the officials had a perfect view. However, Kemp’s crew, with a penchant for calling the most penalties in the league, missed that.

The reversed call on Hunter Henry’s TD catch was a definite game-changer. Instead of going up 30-23, it was cut to just a 26-23 lead. New York took an inordinate amount of time to look at this play. But Henry’s hands were under the ball, and from the closeups on social media, it looks like the ball didn’t touch the ground.

Bill Belichick was not happy being asked about it. “Why don’t you guys go to the officials with your pool reporter and ask them about the play and let them explain it to you,” Belichick said.

Mac Jones correctly pointed out that regardless of the call, the team had to move and had the entire 4th quarter to score…they didn’t.

“We got to move on from that play and play the rest of the game,” Jones said at his postgame press conference. “The refs have a job to do. They looked at that play and ruled it incomplete…there were other chances we had where we could have punched it in…one call can’t determine the outcome.”

While Jon Jones got flagged twice for face-mask penalties, the refs definitely missed one on Minnesota’s Danielle Hunter for pulling Mac Jones down by his face mask. That should have been a no-brainer, as well as Matthew Slater being blocked in the back twice on the same play. How they missed both of those calls defies description. But good teams can overcome the opposition (and the refs), but it doesn’t make it easier.

Now the Patriots have to regroup and prepare for a very potent Bills team next Thursday night. And with the loss, they again drop back to last place in the division, depending on the outcome of the Jets game on Sunday against the Bears.

Look for my Positional Report Card ASAP due to the short week.

By: Ian Logue
Things haven't gone quite the way the New England Patriots or the Las Vegas Raiders might have hoped during this 2022 NFL Season, and it…
27 mins ago

By: Ian Logue
Watching Sunday's group of NFL contests yesterday was a frustrating reminder of the contrast between the New England Patriots and the rest of the league…
3 hours ago

By: Ian Logue
Here's what Bill Belichick had to say during his weekly appearance on WEEI's The Greg Hill Show on this Monday morning.
5 hours ago

By: Ian Logue
Thursday night's New England Patriots loss against the Bills started off with a miscue and then a little bit of hope, but everything essentially went…
3 days ago
wpDiscuz