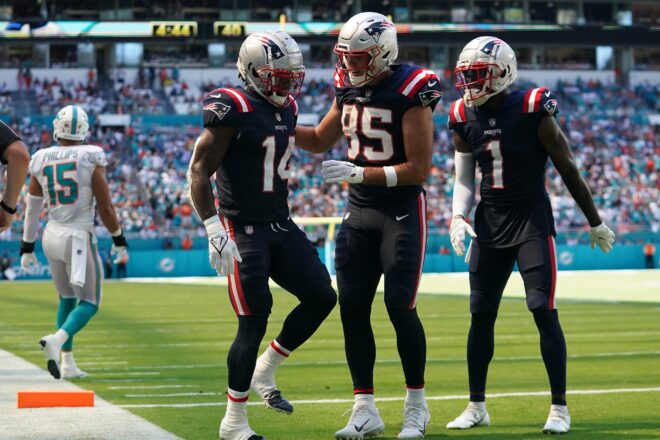 The 2022 season for New England Patriots running back Ty Montgomery is over.

On Wednesday, the Boston Globe’s Jim McBride reported Montgomery is out for the remainder of the year after undergoing shoulder surgery.

Montgomery saw action in just one game this season, recording three receptions for 15 yards, and scored the Patriots’ only touchdown during the season opener against the Miami Dolphins. Midway through the contest, Montgomery hurt his shoulder and landed on injured reserve following the game, where he’s remained ever since.

The Patriots signed Montgomery in free agency in March to a two-year, $3.6 million contract. He appeared to be on track to replace James White as the team’s main passing back in training camp before spraining his ankle in the final preseason game against the Las Vegas Raiders.

Montgomery would play 28 snaps in Week 1 before sustaining the injury to his shoulder.

When asked if the Patriots anticipate Montgomery returning at any point this season, head coach Bill Belichick described his situation as “take it day by day.”

With Montgomery out of the fold moving forward, the Patriots will continue to rely upon Rhamondre Stevenson and Damien Harris as their primary backs, with J.J. Taylor, Pierre Strong, and Kevin Harris rounding out the depth chart.

Ty Montgomery reportedly is out for the season, but he’s here at practice today. That’s him in the hoodie. pic.twitter.com/J09qzbDbEj