4 weeks ago at 6:00 am ET
Follow @SteveB7SFG
Posted Under: Patriots Report Card 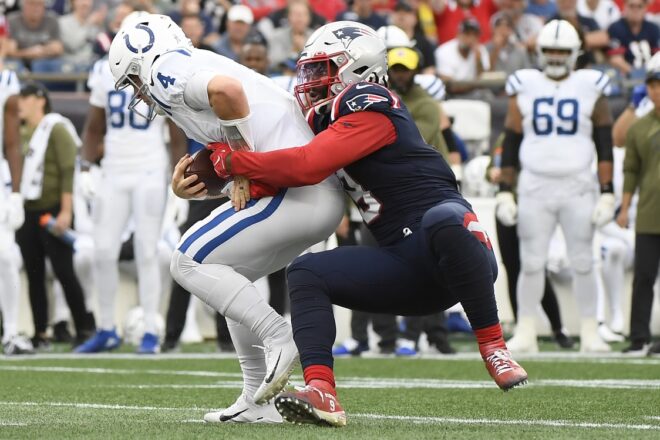 If there ever was a quote that matched the Patriots’ performance on Sunday afternoon, this was it. Depending on which side of the ball you were focused on, this was either a great display of total team defense or another offensively (literally and figuratively) challenged mess.

The Patriots go into the bye week at 5-4, exactly where they were a year ago. However, unlike a year ago, this year’s slate of remaining games from this point forward is the 2nd toughest in the NFL and features the Bills (twice), Miami, the Jets, Minnesota, and Cincinnati. However, I digress; we’re here to discuss yesterday’s game.

If you are a fan of defensive football, this Patriot performance was aces in your book. The defense sacked Sam Elhinger nine times and held Indy to just three points. They also held the Colts to 0-14 on third downs and 0-2 on fourth downs. They had a pick-six in the secondary. They blocked a punt that set them up inside the five-yard line.

If you are a fan of high-scoring offense and big offensive output…well, this game was not for you. The Patriots’ offense was looking again like the players had all just met and were playing alongside one another for the first time.

So, here are our grades this week for the Patriots-Colts game.

Mac Jones wasn’t great…or even good, but putting all this on him is being extremely short-sighted. The offensive line was terrible, and we’ll get into that below, but the play calling was curious (bad), especially on early downs (more below). He wasn’t able to go through his normal progressions since he had no time.

But the Colts knew, with no time to throw, that many will be screen passes, and for the most part, they sniffed those out too. Jones finished 20-30 for just 147 yards (4.9 yards per pass) with one touchdown and no interceptions for a passer rating of 89.2. It was the first game this year that Jones didn’t turn the ball over.

Jones’ accuracy was off at times, and it seems he’s locking on to his first read. But awful playcalling on early downs put them consistently in a hole, where they are constantly in 3rd and long situations. Still, he missed a couple of 3rd down throws that could have kept the chains moving.

Rhamondre Stevenson had 60 yards rushing on 15 carries (4.0-yard avg), but considering how the offensive line was playing and that his first two carries went for a combined -7 yards, then his body of work looks better.

Stevenson also caught three passes for 10 yards, including a nifty one-handed touchdown reception at the pylon for the only touchdown of the game for either team.

With Damien Harris out (illness), the coaching staff made another curious move by elevating J.J. Taylor from the practice squad. Taylor is a change of pace back, not really a receiver out of the backfield. He’s listed at 5’6, 185. Running him into a stout Colts DL with little blocking was an exercise in futility. He carried 10 times for nine yards. He also caught one pass for eight yards. Taylor’s best play was a Kendrick Bourne fumble recovery.

Jakobi Meyers was again the lone bright spot for the WRs. He caught five passes for 42 yards on six targets. Kendrick Bourne had three catches for 11 yards. Each of them had a fumble; Meyers’ was recovered by the Colts, while Bourne’s was recovered by Taylor.

Tyquan Thornton made one catch for a five-yard gain. It is difficult to really grade the skill position players too harshly since the protection was so bad.

The tight ends were (FINALLY!) used on a seam route, and lo and behold, Hunter Henry caught a really nicely thrown pass by Jones for 30 yards. Henry finished with four catches for 50 yards on four targets.

Jonnu Smith caught three passes for 21 yards, but his best play came on a 1st down(?) screen pass that went for 24 yards and set up the Patriots’ first field goal. If the math doesn’t add up, trust me they are correct. Smith’s targets were all screens at or behind the line of scrimmage.

The coaches were moving both of them around, trying to find more production for the duo who have been woefully underutilized.

Any hopes of a better game for this group than last week were dashed on the game’s first snap. DeForrest Buckner blew right by James Ferentz and hit Stevenson for a two-yard loss. Cole Strange struggled again and was benched for much of the game. He was replaced by Isaiah Wynn, who struggled as well. Yodny Cajuste, fresh off the injured list, struggled early but seemed to improve as the game wore on. Trent Brown and Michael Onwenu saved the unit from being as bad as the Colts’ OL was.

But it was still a disaster. The team averaged 2.5 yards per rush. They converted only 6-17 third down plays. Mac Jones was sacked four times and hit seven times, and the team had eight plays going for negative yardage.

The Patriots’ defensive line dominated the Colts’ OL all game long. Indy rushed for just 78 yards, with half of them coming on scrambles by Sam Ehlinger. Granted, Jonathan Taylor was out, but his replacement, Deon Jackson, had 23 yards on 11 carries.

Using some stunts on passing downs, Lawrence Guy and Matthew Judon confused the blockers, which Judon pounced on, getting a pair of sacks. Guy, Davon Godchaux, and Deatrich Wise were eating up blocks allowing the linebackers to feast. Wise notched a half-sack. The only blemish was a roughing the passer call on Daniel Ekuale, who made contact with Ehlinger’s face mask, negating another sack by Judon.

The linebackers dominated this game from start to finish. Of the Patriots’ nine sacks, the linebackers accounted for 8.5 of them. The backers also had eight tackles for loss, 11 QB hits, and 1 pass defensed.

Judon was all over the field and harassed the Colts on every snap. The Colts will be seeing red sleeves in their sleep. Judon had 3 sacks (a 4th negated by a penalty), 4 QB hits, and 3 tackles for loss (TFL). Josh Uche also had 3 sacks, 2 QB hits, and 3 TFLs. Ja’Whaun Bentley led the team with 9 tackles, a sack, 2 QB hits, and a TFL.

Jahlani Tavai had a half-sack and 2 QB hits. Raekwon McMillan chipped in with a sack, a TFL, and a QB hit. Mack Wilson had a pair of tackles, while Anfernee Jennings had a pass defensed. Everyone chipped in, and it was total domination.

The Patriots’ secondary had a very good game on Sunday. The Colts only managed 103 yards passing, but the team had 60 yards in sacks. That means that Indy only had 43 yards net passing.

Coverage was tight everywhere as the secondary helped out in run support as well. Jalen Mills had two nice PDs, Devin McCourty had two 3rd down PDs, and Myles Bryant chipped in one on 4th down. Jack Jones had a PD.

The Patriots’ deep group of safeties (McCourty, Adrian Phillips, Jabrill Peppers, and Kyle Dugger were excellent in run support and in coverage. But the best was saved for last. Jonathan Jones caught a tipped ball and returned it 17 yards to the house for the day’s final score.

Special Teams Coordinator admitted after the game that the team had this one circled after the Colts embarrassed the Patriots last year in Indy, blocking a Jake Bailey punt that they returned for a TD. Achord drew up a well-designed play where Jonathan Jones burst in untouched and blocked Matt Haack’s punt setting up the Patriots inside the five.

Nick Folk was Mr. Automatic on Sunday, going 4-4 on FG attempts, including a 49-yarder, and 2-2 on extra points. Marcus Jones had a stellar 23-yard punt return and a 32-yard kickoff return against very solid Indy coverage units.

Jake Bailey was the only downer; after a booming 58-yard punt to begin the game, he began to shank a few punts later. His last punt was a 7 yarder off the side of his foot. He averaged  38.7 yards per punt.

The Patriots coaches’ grade is a bit different, as we’re giving them a grade for the mid-point of the season instead of just the Colts game.

The defensive coaches for the game aced the test with a great game plan that was executed extremely well. The offensive coaches made some curious decisions, but first, let’s go to the playcalling.

Putting your team constantly in 3rd and long situations won’t help your team score points or give your QB much confidence. They were extremely predictable on first down, running the ball on their first four 1st down calls. And they went for -2, -5, +1, and +1. On the next first down, they passed to Smith and gained 24 yards, leading to a FG by Nick Folk.

It doesn’t take a rocket scientist (excuse the Freudian slip) to figure out that opponents are sitting on the run on early downs.

The season grade kind of mirrors exactly where they are now. They’re not great; they’re not terrible; they are a middle-of-the-pack team that can compete for a playoff spot. The defense can pretty much stop anyone other than a team with a mobile QB. The offense is lost right now.

And the coaches need to use the bye week self-scouting to figure out what they can and can’t do well and stick with what does. They tried to use the wide-zone concepts and a deep passing game, and they’re still searching.

They’ve been successful when they use play-action, but they rarely use it and most frequently put Jones in the shotgun. When they go uptempo or spread teams out, they’ve had success. At the bye, the offense is still in search of an identity. And that is a coaching issue.

We’re on to the Bye Week…and then the Jets.