1 month ago at 7:13 am ET
Follow @SteveB7SFG
Posted Under: Patriots Report Card 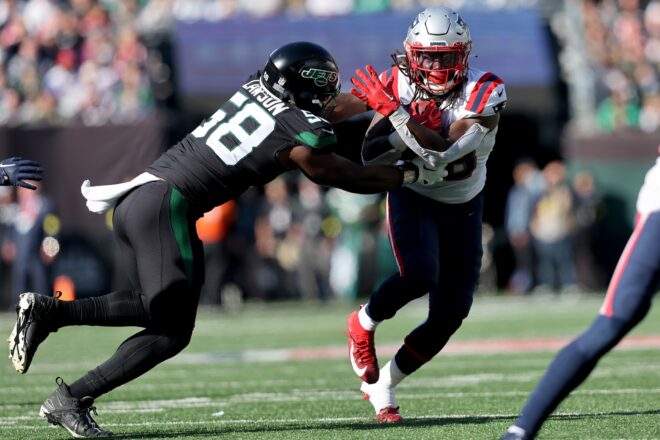 The Patriots evened their record at 4-4 by beating the Jets with Bill Belichick passing George Halas with his 325th career victory as a head coach, moving into second place all time. But after the game and into Monday, Belichick went out of his way to praise QB Mac Jones.

Why does this matter? After a sloppy handling of the QB situation a week ago, it was important for Belichick to lay out a plan moving forward. And that involves getting behind their 2nd-year QB. He isn’t immune to being replaced down the road, but right now and for the foreseeable future, Jones is the starting QB.

The game in New Jersey wasn’t a great day for Jones and for the majority of the offense, for that matter, which has to factor into the equation. Especially since the Jets’ defense is playing outstanding thus far this season.

Mac Jones went wire-to-wire on Sunday in New Jersey and was pressured from start to finish. Yes, some of his decision-making was off the mark, and he missed some throws that he should have made. And, as many have pointed out, he appeared skittish in the pocket for most of the game.

But his happy feet in the pocket were for a good reason. Jones was sacked six times and suffered eight QB hits by the Jets’ pass rush, which has been steadily improving every week. Pro Football Focus (PFF) wrote he was pressured 17 times (38% of his dropbacks), a season-high, and was only pressured that much twice last season, both losses. The Patriots had seven plays go for negative yardage.

Jones completed 24-35 passes for 194 yards with a TD and an INT for a passer rating of 79.9. When the play calling changed to a shorter passing game, allowing him to get rid of the ball quicker, he was better, hitting on some 3rd down throws to keep the sticks moving. It was an up-and-down day for Jones, but facing that kind of pressure, he wasn’t as bad as many fans believe.

Rhamondre Stevenson continues to grow before our eyes, becoming a well-rounded three-down running back. Despite the Jets stifling the ground game in the first half, where they held New England to just 35 yards on 13 carries. However, that all quickly changed in the 3rd quarter.

On the first play from scrimmage in the 3rd quarter, Stevenson got through the line and broke several tackles en route to a 35-yard run. He finished with 71 yards on 16 carries (4.4-yard average) but perhaps the most telling stat comes again from PFF. Doug Kyed posted on Twitter that Stevenson was credited with 81 yards rushing after contact, which speaks volumes about the play of the OL. He also caught seven passes for a team-high 72 yards.

Damien Harris carried 11 times for 37 yards and added two catches for 15 more. Combined, he and Stevenson combined for 195 total yards on the day.

DeVante Parker injured his knee on the game’s first play and didn’t return. His injury status will have to be monitored moving forward this week. Jakobi Meyers was the lone bright spot for the WRs catching nine passes for 60 yards and a TD. His score came on a nicely-designed play when the Patriots were facing a 4th and 1 from the Jets’ five-yard line. Meyers caught the pass, got the first down, and dove for the pylon.

Tyquan Thornton made one catch on a nice comeback route that gained 13 yards. Nelson Agholor was only targeted once for a two-yard gain on a screen that the Jets quickly snuffed out. Kendrick Bourne remains in the doghouse with only one target.

The tight ends didn’t have a ton of production, but they factored in the win, which raises their grade a bit. Hunter Henry caught one pass, but it was a big 22-yarder. On the failed 4th and 1 play, it appeared Henry was open, but Jones missed him. But on Meyers’ touchdown, it was Henry’s block that sprung the play.

Jonnu Smith had three catches for just 10 yards but was alert on a squib kickoff, scooping it up and returning it to the 38-yard line.

Last week I thought the offensive line had hit rock bottom. This week, they continued to dig. The right tackle position (Marcus Cannon, Isaiah Wynn) was awful. Cannon was beaten several times, including when Jones had his arm hit by Bryce Huff. The ball floated up in the air and was picked off.

Cole Strange struggled against Quinnen Williams, allowed a sack, and was flagged twice. He was replaced by Wynn…ouch. James Ferentz was also overwhelmed at the point of attack with Williams as well.

The Patriots’ defensive line had a nice comeback game this week and bottled up the Jets’ running game while putting pressure on QB Zach Wilson all afternoon. Deatrich Wise played nearly the entire game, registering eight QB pressures and had a key deflection on a third-down pass.

Lawrence Guy was solid and lodged a sack, and Daniel Ekuale had three QB pressures.  The Jets rushed for only 51 yards on 15 carries (3.4-yard avg).

The linebackers also had a big game after a bad one a week ago. And surprise! It all begins with Matthew Judon.

Judon was all over the field, and although he was credited with just a single tackle and a pass defensed, he was responsible for seven QB pressures, two of which resulted in interceptions. Ja’Whaun Bentley was the recipient of one of those picks, Devin McCourty the other. Mack Wilson had pressure on Wilson that resulted in McCourty’s other interception. Josh Uche added a sack.

The Patriots’ secondary had an up-and-down day. After two early New York scoring drives, they were part of the reason the Jets didn’t score again until late in the game. As did McCourty, Jabril Peppers had a strong game with two picks.

While the coverage for most of the game was good, there were far too many big pass plays given up. Garrett Wilson caught an early 54-yard pass and ended up with six catches for 115 yards. The secondary also gave up a 63-yard pass to Denzel Mims, leading to the Jets’ final score with under two minutes left.

Ty Conklin and C.J. Uzomah each had 27-yard catches; Jeff Smith had a 23-yarder.

Nick Folk was Mr. Automatic on Sunday, going 5-5 on FG attempts, including a 52-yarder. Jake Bailey only averaged 40.8 yards on his four punts, but two of them pinned the Jets inside the 20. His best punt, however, should have been downed inside the 10. But DeMarcus Mitchell made a mental mistake and carried it into the end zone.

Marcus Jones had a terrific 32-yard punt return, and Peppers did a nice job of covering up an onsides kick. Ditto for Smith returning a kickoff to the 38.

The Patriots coaches had a short week to prepare for the Jets, and the team was much better prepared. While far from perfect, the overall game plan was good, and the execution was much better than a week ago.

Matt Patricia’s play-calling was not great on Sunday, but facing the Jets’ defense, is a tough task, especially on the road.

Bill Belichick passed George Halas and got win #325. And there are only 17 more wins until he catches up to Don Shula.

We’re on to the Colts…