1 month ago at 7:32 am ET
Follow @SteveB7SFG
Posted Under: 2022 Patriots Regular Season 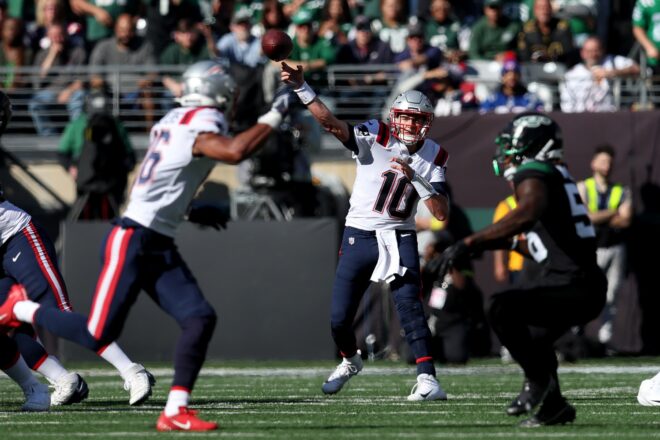 The Patriots evened their record back to .500 at 4-4 and snapped the Jets’ four-game winning streak with a 22-17 win on the road. With the win, head coach Bill Belichick moved past “Papa Bear” George Halas for second place all-time in coaching wins with his 325th victory.

Offensively, it was an ugly showing from both teams, and neither starting QB, who were both 1st-round draft picks from a year ago, are solidifying their roles in Year 2. Mac Jones and Zach Wilson are both making poor decisions with the ball, and the game showed that there is still a lot of work to do.

So, there are some additional observations and thoughts from yesterday’s win.

The Patriots’ 2nd-year running back was the star of the offense on Sunday. He carried 16 times for 71 yards (4.4 average) and caught 7 passes for 72 yards on eight targets. He showed a lot of power, breaking numerous Jets tackles, including a 35-yard run that helped set up the Patriots’ lone touchdown.

He has become a weapon in the passing game and has 32 catches on the season, with 19 in the past three games. Stevenson accounted for nearly half (143) of the Patriots’ 288 total yards offensively.

Nick Folk was perfect on the afternoon converting all five field goal attempts as well as converting his only extra point attempt. He provided the difference in the game.

The Patriots’ offensive line issues are a continuing problem. Bill Belichick told Charles Davis in a production meeting prior to the game that inconsistent play at tackle is one of the causes for the offense struggling this year.

Right tackle Marcus Cannon struggled in pass protection once again. So did Isaiah Wynn. Rookie Cole Strange and backup center James Ferentz against Jets’ DL Quinnen Williams, who has been a game-wrecker this season.

The Jets sacked Mac Jones six times and had eight QB hits without resorting to much blitzing and rushing just four for most of the game. Strange gave up a sack and was whistled for two penalties. He was lifted for Wynn. It is an area that needs fixing…fast.

One of the hallmarks of the Jets’ four-game winning streak has been Wilson’s ability to cut down on mistakes. Wilson was “seeing ghosts” in two games last year and making poor decisions and throws. That resurfaced in a big way on Sunday.

While the Patriots’ defense only had two late sacks in the game, they were successful in pressuring Wilson, and he was constantly intent on firing the ball into very tight windows. After they scored 10 points on their second and third drives, the Jets were held scoreless until there was less than two minutes left in the game.

Wilson was intercepted three times on very poor decision-making, trying to force the ball into non-existent windows instead of throwing the ball away. Devin McCourty had two of those interceptions, one of which he made a nice catch, just keeping his knee inbounds.

The defense made it a goal to stop the run and force the ball into Wilson’s hands. The Jets rushed for just 51 yards, and Wilson’s interceptions crippled the offense. In three career games against the Patriots, Wilson has 1 TD and seven INTs.

Mac Jones played the entire game with 77 offensive snaps, a new career high. But his decision-making also continues to be very inconsistent. He made a little progress, but he must improve if the Patriots want to start stringing victories together.

Too often, he appears locked into his first read and skittish in the pocket. But with the pass protection, he’s getting, perhaps that is warranted. However, under pressure, he’s making consistently poor decisions. On the Patriots’ first fourth down attempt, a great play-call caught the Jets flat-footed, but Jones’ poor throw sailed well wide of the target.

Because of the protection issues, Matt Patricia went to a quicker passing game in the second half, and it appeared to work better. Jones finished 24-35 for 194 yards with a TD and an INT.  The touchdown came on another 4th and 1 call. Jones and Meyers connected not only for a first down but a touchdown on a nice catch and run. Belichick, however, accentuated the positive.

On the Patriots’ first offensive snap, Jones threw an incompletion to Parker, who got his Nelson Agholor and/or Kendrick Bourne at the trade deadline tomorrow at 4 p.m. Parker is one of the top WRs in terms of yards per catch at 21.4.

Of the wide receivers, Parker had the one snap/target, Tyquan Thornton had two, and Kendrick Bourne and Agholor each had one. Tight ends Jonnu Smith, and Hunter Henry had five targets between them. Meanwhile, Meyers and Stevenson were targeted 20 times between them. That kind of targeting will lead to defenses to adjust accordingly.