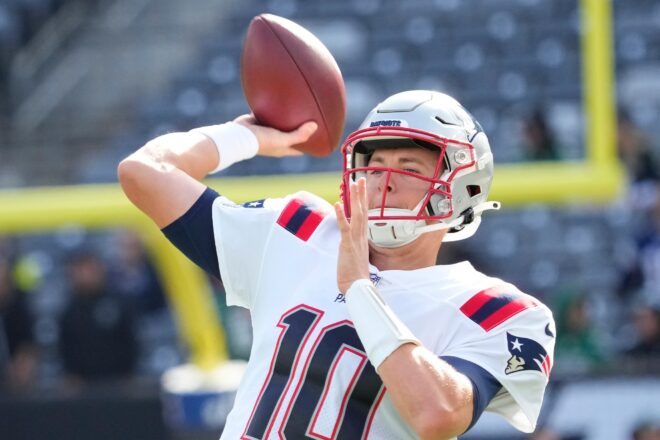 Some quick thoughts on this Monday:

1) Watching the game back last night, Mac Jones definitely looked more comfortable in his first full game in over a month than he did a week ago, but still not close to where he needs to be.

How he played yesterday should be considered a nice first step in getting reacclimated in the offense, but the rigors of what he’s faced this season definitely seem to have taken its toll.  Anyone who has watched him for a long time can see he’s not standing in the pocket the way he did during his rookie year, which makes sense given how often the protection has broken down at times, both during his previous starts, and again yesterday.

One area that has stood out is that Jones seems to understand the importance of also picking his spots running with the football, which he showed again on Sunday.

Jones did a good job of taking advantage of openings when his receivers were covered, stepping up and breaking downfield when the Jets brought pressure and things opened up in front of him. He ended up rushing 4 times for 25-yards (excluding kneel-downs), and had several big gains, with two that resulted in first downs.

At the same time, the fact he’s been a little shaky is a mental hurdle he’ll have to overcome. Against good defensive teams, he’ll definitely see more of it, and while not being afraid to run will help keep those same defenses honest, it remains an area of concern.

One positive was the fact he at least finished relatively well, missing just four throws over the final two quarters as the offense outscored New York 16-7 in the second half.

His fourth-down throw at the start of the third quarter to Jakobi Meyers for a 5yd touchdown was also huge, as given the late-game surge by the Jets made the deficit too big for New York to overcome.

Still, as encouraging as it was to see some of his bright spots, Jones also probably knows Sunday should be considered a performance where that was his floor. It’s definitely nowhere near where his ceiling needs to be.

2) The offensive plan with Jones was again questionable as they had him back in the shotgun for the majority of their plays, which didn’t seem to do him many favors.

That more or less had the Jets teeing off on him for most of the game, which didn’t allow Jones to get into much of a rhythm.

Dan Orlovsky mentioned that multiple times on Twitter during the contest, noting the contrast of how things are called with Zappe out there vs Jones.  Why they’re operating that way remains a question mark because it definitely seemed to put them in some difficult situations.

3) David Andrews being out of the line-up contributed to some of the issues they dealt with yesterday, both in protection and in the running game.

He’s one of New England’s best blockers inside, and the Jets certainly took advantage.  New York was able to be disruptive and also did a good job in making whatever holes available for the backs relatively small.

James Ferentz certainly deserves plenty of credit for the way he played yesterday, but Andrews being out was definitely noticeable.  His attitude and intensity have been key assets, and it will be interesting to see if he misses Sunday’s game against Indianapolis with the hopes of potentially having another week during the bye to get healthy. 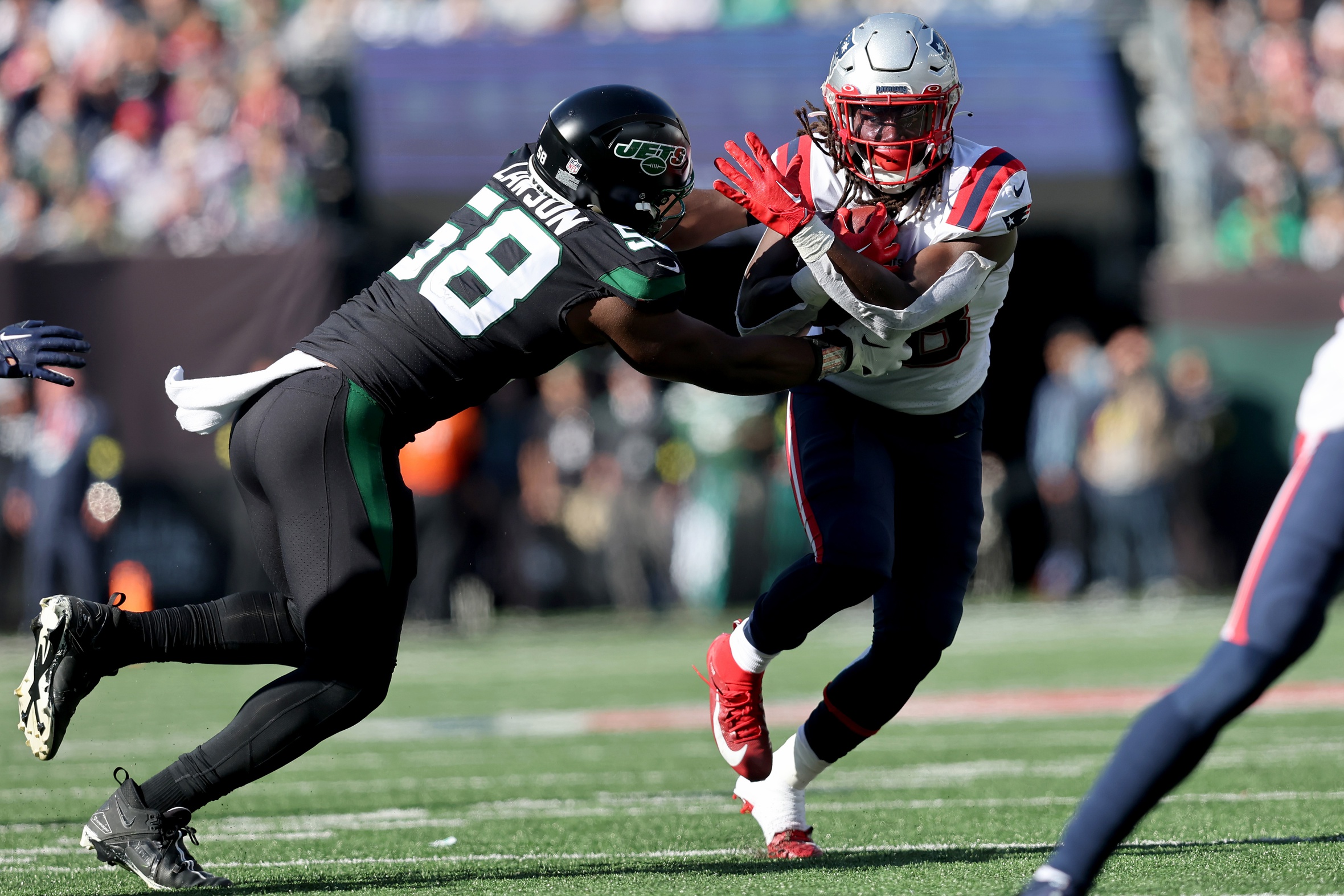 Stevenson has been terrific so far this season. (PHOTO: Brad Penner-USA TODAY Sports)

4) Rhamondre Stevenson’s performance running the football may look good on paper but watching the way he ran the football yesterday was just absolutely amazing.

He’s so tough with the ball in his hands, and he’s so incredibly athletic for a guy his size.  He had a couple of moments Sunday where he was hit multiple times early in the play and just ripped through those tackles, showing unbelievable balance and acceleration.

With the Jets getting penetration, Stevenson was a big reason those plays weren’t stopped early, and he made things look a lot easier than they really were.  As good as Damien Harris is, Stevenson has quickly made him look like an afterthought, and his ascension in the offense is quietly becoming one of the biggest stories of the season.

5) Despite Kendrick Bourne’s return to the offense yesterday, it was odd to see him not get involved at all.  Sunday was essentially the Jakobi Meyers and Stevenson show as the two combined for 16 of Jones’ 24 completions.  Both players also led the team in receptions and receiving yards.

Bourne seems to be taking it all in stride, joking about the fact he didn’t do much on social media after the game while still being able to enjoy a victory.  However, it’s surprising that we’re basically at the halfway point of the season and he has just 11 catches for 156-yards, which is clearly not even on the same planet as the 55 reception, 800-yard total he finished with in 2021.

Given where we are, and the fact the tight ends have still seen limited targets, that may not change anytime soon.  But he’s a dynamic player that you’d think would be more involved.

Unfortunately, it just doesn’t feel like there are a lot of targets to go around in the offense they’re currently running, which probably won’t help change this situation.

6) As good as Devin McCourty was yesterday, it’s hard not to wonder if he’s dealing with some sort of injury.

Watching the game back, one thing that stood out was how many times the veteran was trying to make arm tackles and how hesitant he appeared wrapping up.

Anyone who has watched McCourty play knows that tackling has always been one of his strengths, but there were several plays where he just reached out and tried to pull a guy down, which is definitely uncharacteristic for him.

Obviously, his ball skills are as good as ever after seeing him come up with his two interceptions.  But watching him be so hesitant to tackle definitely has to make you wonder if he’s dealing with something, which could also explain why he’s already admitted that this might be his last season. 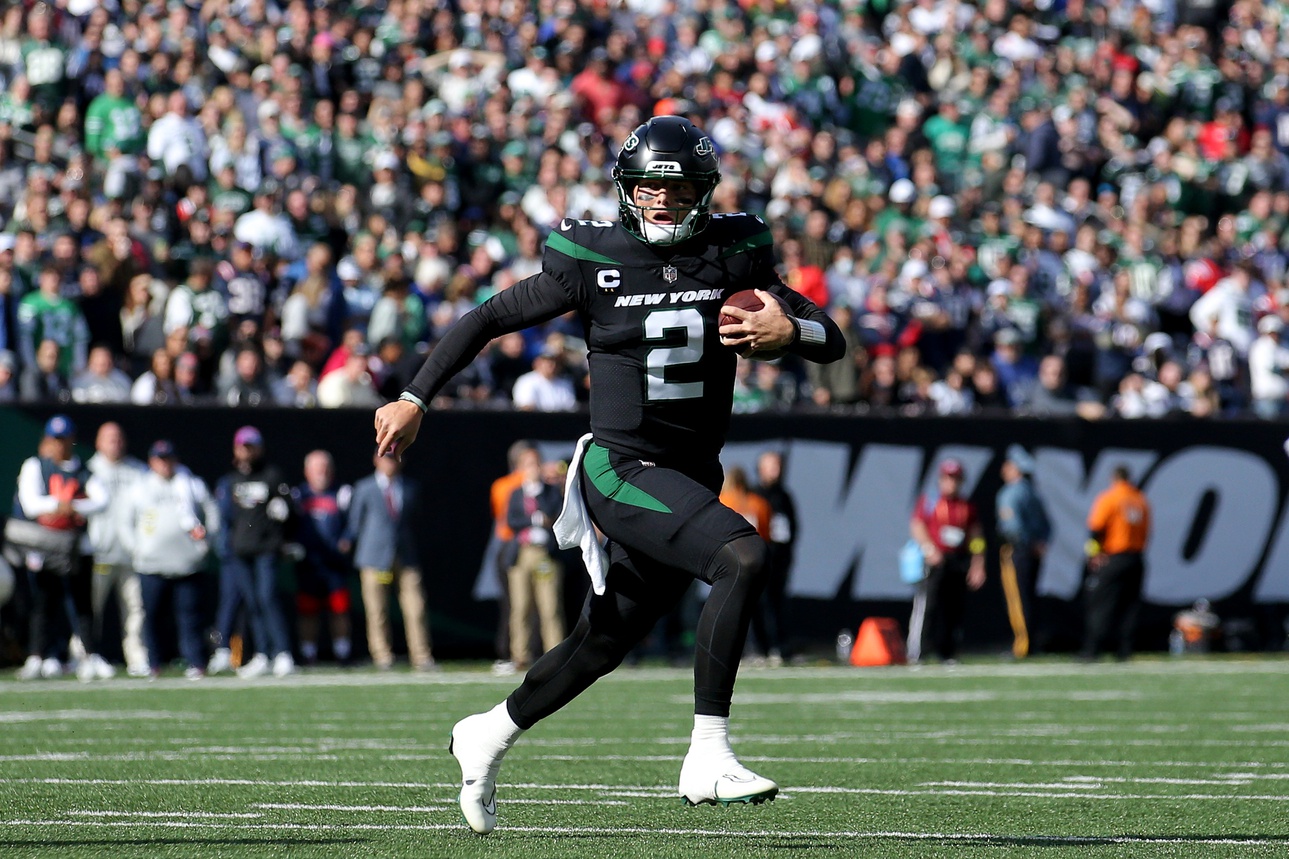 7) Watching Zach Wilson play, he sort of looks a lot like Aaron Rodgers in terms of some of his mannerisms on the field and the way he throws the football.

The kid definitely has a good arm, and he makes similar throws in terms of how he flicks the ball downfield and the way he scrambles.  Obviously, he’s not as smart as Rodgers but Sunday sort of stood out, especially on that deep pass play he made rolling to his right.

At the same time, his attitude and lack of accountability is also similar to Rodgers, and that’s definitely working against him since his level of play certainly hasn’t matched his cocky attitude. Rodgers has also at least played well enough over the course of his career to warrant his team putting up with it.

Given what we’ve seen so far, and the criticism he’s dealing with down there, it remains to be seen how long they’ll be willing to deal with his reckless play and his inconsistency.

Worse, the lack of consistency doesn’t feel like something he necessarily takes responsibility for, which is probably the biggest red flag for a player who, at this point, has been a disappointment given the expectations.

8) At 4-4, things could definitely look different in a few weeks, which is when the two teams next meet.

The Patriots will next face the Jets at home at Gillette Stadium coming off of a bye, which comes after this weekend’s game against Indianapolis.  The fact their next match-up comes so quickly after this first meeting was a point that Wilson mentioned after the game when questioned by a reporter about the edge New England has had over his football team over their last couple of battles.

The second-year quarterback stood at the podium Sunday after the game still in his pads with eyeblack on his face, looking angry and frustrated. He’s clearly already thinking ahead as he cut off the reporter and said, “Yeah, we’ll have these guys in two weeks.”

All he needs to know is the first meeting in New York saw a reasonable beating while the next at Gillette saw the Patriots hang 50+ on them.

While it’s a little tough to imagine this offense scoring that many points, Wilson should realize he’s still going to need to play a lot better than he did Sunday in order to keep that from happening.