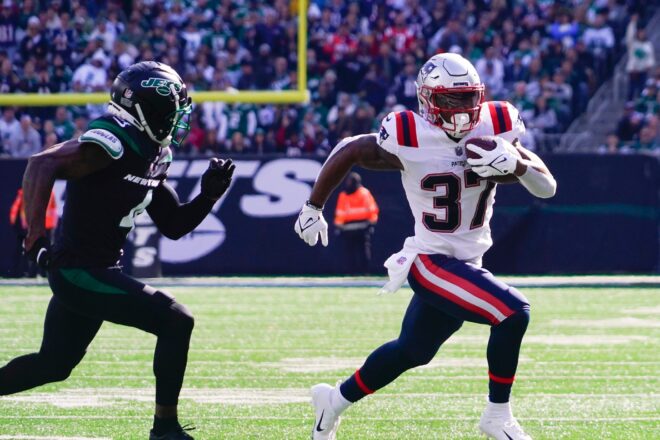 Some quick first impressions from this one:

1) Patriots quarterback Mac Jones had a little better performance away from Gillette Stadium on Sunday during the New England Patriots 22-17 win over the Jets, albeit it certainly wasn’t perfect.

He finished the afternoon a little stronger than he did against the Bears, completing 24-of-35 (68.6%) for 194-yards along with a touchdown but he did add to his interception total.

His lone pick was a little better than what happened on Monday night.  It came on a 3rd-and-9 play where he was trying to hit Kendrick Bourne on a deep throw up the left sideline after Bourne had appeared to get behind his man.

Unfortunately, Marcus Cannon ended up on the losing end in his battle against defensive end Bryce Huff, who managed to push Cannon back and got close enough to hit Jones’ arm as it was going forward.  The ball then fluttered in the air and into the hands of Jets defensive back Michael Carter for the interception.

Jones also had a little luck on his side Sunday.  He avoided a near disaster on a throw where he was targeting Jakobi Meyers, and the two got crossed up (Jones called it a “miscommunication” during his press conference), with Jones throwing it right to Carter, who thought he had his second pick of the game and he took off up the sideline to the end zone for what appeared to be a pick-six.

However, in typical Jets fashion, a roughing the passer on teammate John Franklin-Myers nullified the turnover, and Jones and the Patriots, fortunately, dodged a massive bullet.

All that being said, nothing came easy for Jones. Like Monday night, the second-year quarterback spent most of the afternoon under pressure, including one play where he got hit from his non-blind side and lost the football before rookie Cole Strange was able to come up with it.

The Jets essentially followed the same model the Bears did, bringing pressure from various areas and forcing him to move around while also doing a decent job in the early going of keeping guys covered and preventing him from getting the ball out.

However, that improved as the game went on.  After a shaky first half, Jones came out and missed just four throws in the second half, completing 11-of-15 over the final two quarters, including 2-of-3 in the red zone with a touchdown as the Patriots built enough of a cushion to fend off a late Jets comeback.  But compared to Monday night, Jones actually started to seem like he was at least settling back into the timing of things.

Jones played just 16 snaps against the Bears Monday night before sitting down after the third series.  Sunday’s game ended up being a significantly higher workload, with the offense executing 75 plays (excluding penalties).

But overall, having not played a full game in over a month, he fought his way through it and while it may not have been perfect, it’s something to build on.

Head coach Bill Belichick praised Jones after the game during his press conference.

Hopefully, it’s a step in the right direction heading into next Sunday’s match-up at Gillette Stadium against the Colts.

2) Jakobi Meyers was terrific as usual Sunday, finishing as the team’s leading receiver.  He caught 9 passes on 12 targets for 60-yards as well as a touchdown, which came on a 4th-and-1 from the Jets’ 5-yard line.

Meyers, who has been pretty vocal in his support of Jones in recent weeks, said that the quarterback’s improvement in the second half was a collective effort by the offense, who felt they needed to do a better job for him.

“I wouldn’t say just Mac, it was most of an offensive unit thing,” said Myers of their first half struggles.  “It wasn’t just him out there trying to put pieces of the puzzle together.  We all kind of had to come together and just either block better, run routes better, get open better for him, protect him, you know what I mean?  It doesn’t all fall on his shoulders when things go south.  We kind of all have to do our part.”

3) Patriots kicker Nick Folk was solid again on Sunday, finishing a perfect 5-of-5 kicking the football, including a big one from 52-yards out that, at the time, came following Devin McCourty’s second interception that extended the Patriots’ lead to 22-10.

That field goal ended up being critical because it helped the game stay at a 12-point advantage and, given New York’s late surge, helped ensure a big enough margin where New England was able to hold on for the win.

Folk has been outstanding all season, and as usual, he was clutch again.  While it would have been nice to convert a few of those into touchdowns, the fact that position remains one of the few Belichick and the Patriots don’t have to worry about it is definitely a good thing.  Fortunately, the veteran was the difference maker again on Sunday.

4) Rhamondre Stevenson had a productive day, finishing with 143 total yards including 16 carries for 71-yards on the ground, along with catching 7 passes for 72-yards on eight targets.

He came into this game as the team’s second-leading receiver behind Meyers and he’ll leave with that same honor after being a solid go-to player for Jones in this game.  Jones went to him a team-high five times in the first half for 59-yards, with Stevenson doing a good job of also getting some production on the ground after carrying the football 7 times for 21-yards in the first half.

In the second half, he carried 9 times for 50-yards, which helped the Patriots both move the football and keep it away from the Jets as the Patriots finished Sunday with a 35:34 to 24:26 edge in time of possession.

During his press conference, Stevenson noted that they knew this one would potentially come down to a few plays at the end, so the emphasis was making sure they finished strong.

“Very, very proud of our team, how we fought,” said Stevenson after the game.  It was just our preparation through the week, we knew we had to finish the game.  They’re a great team in the second half, fourth quarter, so we just knew we had to play a complete game.”

4) Devin McCourty had a solid performance for the Patriots, finishing the game with two interceptions, one of which helped take away some of New York’s momentum while the second resulted in one of Folk’s field goals.

The veteran now has 33 career interceptions, making him the NFL’s all-time active career leader in that category.  McCourty joked about that accomplishment after the game saying, “I’m just old”, but for a defense that struggled for most of the afternoon at various times, the turnovers were ultimately the difference in the game.

While it wasn’t a pretty win, it’s a victory nonetheless and McCourty was glad they were able to come out of there with the victory.

“I think we talked all week about the ability of Zach Wilson to escape the rush, not get sacked, but also the ability of him trying to make a play that we have to do a good job in the secondary of plastering, staying on our receivers, and just trying to take advantage of an opportunity when the ball’s in the air,” said McCourty.  “I think we’ll watch the film., we gave up too many plays, especially at the end.  That could have killed us.”

McCourty did make it sound like Sunday’s game at MetLife may have been his last there, with the safety mentioning that his brother was there and that it meant quite a bit to play close to home.

If that ends up being the case and he walks away at the end of the season, he at least takes with him yet another performance to go along with what’s already been a terrific career.

5) While much of the talk has centered on the criticism of the Patriots’ quarterback position, fans can at least take some solace in knowing that it’s the Jets who will be stuck with Zach Wilson for the foreseeable future.

Wilson finished the afternoon 20-of-41 (48.8%) for 355-yards as well as two touchdowns, but he was picked off three times.  New England’s defense held him to just 3-of-8 in the first quarter, but Wison got hot in the second quarter where he hit 7-of-10 for 78-yards along with a touchdown,

Unlike Jones, Wilson struggled in the second half.  He completed just 10-of-23 over the final two quarters, including two of his three interceptions.

He was inconsistent throughout much of the afternoon, with most of his success on Sunday coming on home run plays where he completed throws of 18, 27, 27, 63, and 23 yards, which is what kept this one as close as it was.

Fortunately, it was Jones and the Patriots offense who was the more consistent of the two, and the result was New England getting back to .500 while dropping New York to 5-3.

Wilson was salty after this one was over.  He was asked about the struggles against the Patriots and he immediately cut off the reporter and said “Yeah, we’ll have these guys in two weeks.”

Needless to say, it sounds like he’s already looking forward to the rematch.  However, it’s possible that by then, the next meeting could also be a battle for a different spot in the standings.

The two clubs will next meet when the Patriots come off their bye, with the Jets now set to visit Gillette Stadium on November 20th at 1:00pm.