1 month ago at 6:30 am ET
Follow @IanLogue
Posted Under: Patriots News 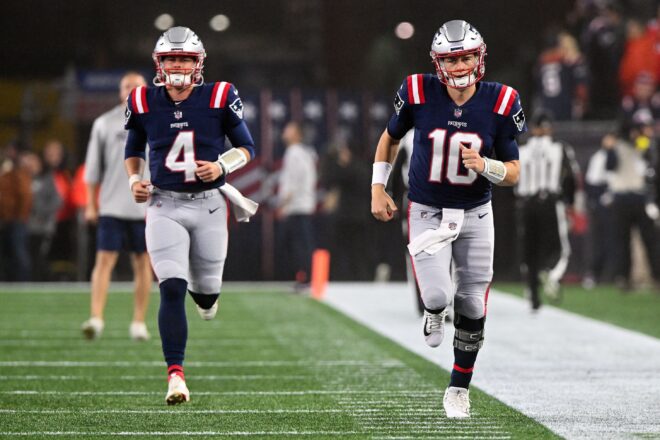 If the New England Patriots hope to salvage what’s left of this 2022 season, they’ll need to either go all-in behind Mac Jones, or pray that Bailey Zappe just had an off night against Chicago on Monday.  Because if not, Bill Belichick may end up with quite a problem on his hands.

One thing that has been clear around the NFL is that without a viable starting quarterback, things don’t tend to end well.  Each season typically just results in spinning your wheels and wasting valuable player years while watching other teams who do have one succeed.

Those successful teams play in January (and potentially February).  The rest simply end up getting a jump on their offseason work.

It’s been a while since Belichick has had that problem.  He enjoyed 20-years with Tom Brady at the helm and seemed to catch a break when Jones fell to them at 15th overall in 2021 after they had gone 7-9 the previous season under Cam Newton.

Fortunately, the rookie quickly instilled some confidence in a team and fanbase that was teetering on the brink, but what’s transpired this season has obviously been a different story.

Most of the issues started back in the offseason with the departure of Josh McDaniels.  The former offensive coordinator obviously took the job in Las Vegas after having been the guy who worked with Jones the most last season.

Looking back on it, the two clearly had a good relationship, and Jones’s subsequent success was the result of how well they worked together.

Fast-forward to training camp, and things just completely fell apart under Matt Patricia and Joe Judge.  New England’s offense could do little right both in the practices and in each of their preseason contests, with things overflowing to the point where Jones showed a moment of frustration on the sideline in Las Vegas during their final preseason game, and then followed it up by throwing his wristband with the plays on it after another series.

The latter move leaves you wondering if this new offense had anything to do with it, but either way, it was definitely a bad look.

Fast-forward again to the start of the season.  Jones got little protection from an offensive line that took some time to come together and got beat up and knocked around in Miami, which resulted in the quarterback needing x-rays on his back after the game.

While he avoided serious injury, it seemed to affect his velocity in the following weeks.  .  Despite winning the next week in Pittsburgh, Jones again took some shots two weeks later against the Ravens, with the final one at the end of the game resulting in the ankle injury that has since kept him out for multiple weeks prior to Monday night.

But injuries aside, the offensive play calling had appeared to be an issue, with not a lot of cohesiveness in the early going.  It also called for him to throw down the field more this season, with various reports saying Jones was encouraged to take chances while having little say in what he could or couldn’t adjust to.

Some of those plays involved Patricia calling for deep throws to an often-covered DeVante Parker, which resulted in four of the first five interceptions Jones threw this season.

Two of those came in what would be his final start in Baltimore before he got hurt, with the second being one where the two players weren’t on the same page and Jones erupted on the sideline after they came off the field.

Since that contest, with Jones suffering the ankle injury, there wasn’t a chance for redemption.  To get past a loss, the best medicine is usually just to get back to work and get after it the next week.

Jones didn’t have that luxury.  It instead clicked the “pause” button on his season and resulted in sudden scrutiny after Bailey Zappe came into the line-up and played well following Brian Hoyer’s departure due to a concussion barely 10 minutes into their match-up the next week against the Packers.

From there, most people know how it’s gone.  Zappe won two straight and immediately came in Monday night to lead two scoring drives.  Only to get shut down the rest of the way and throw two interceptions. 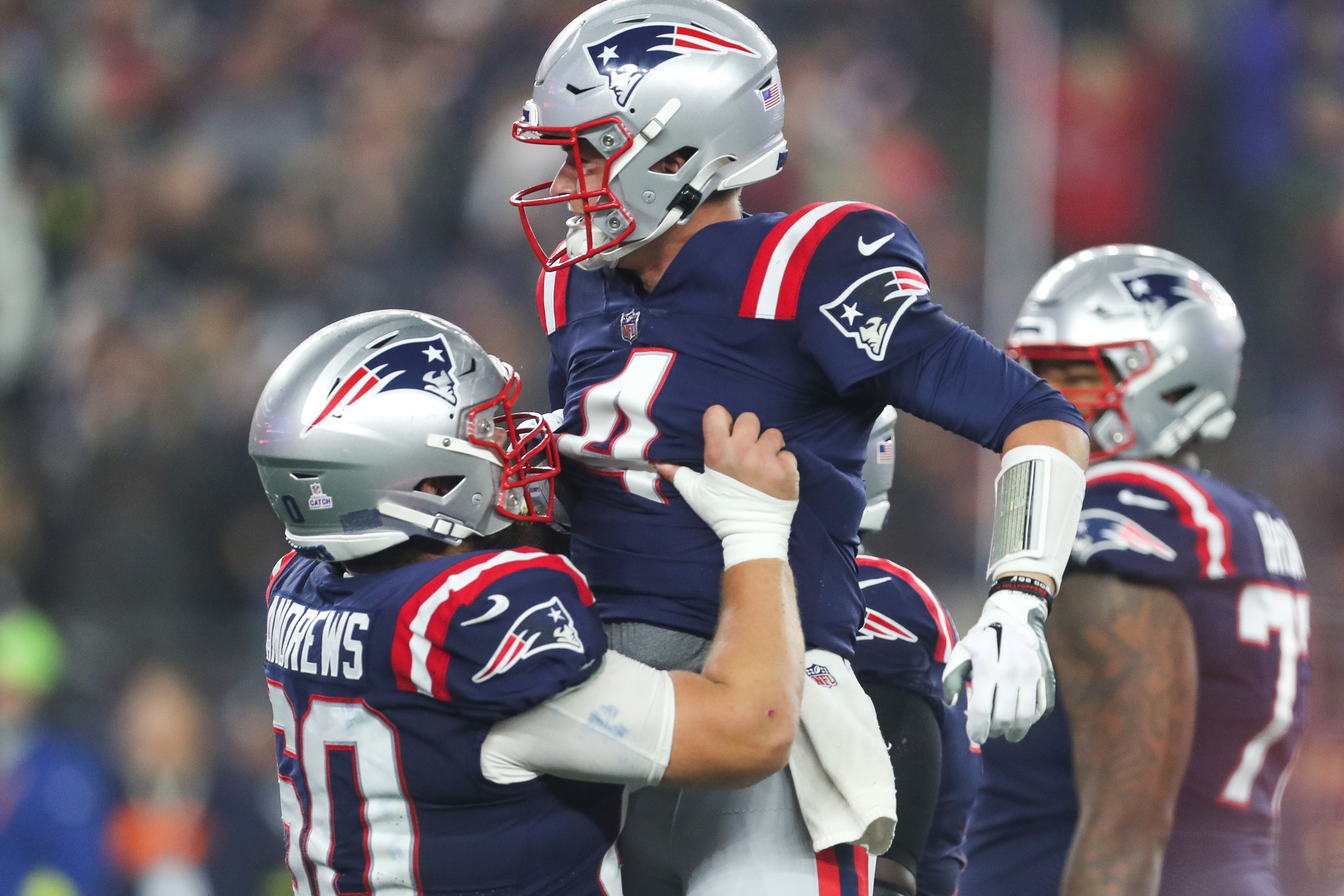 To this point, the entire sequence of events has been somewhat of a disaster, especially for a Patriots team in need of developing and establishing a signal-caller.  Belichick had been coy with the media for two weeks, never favoring one or putting any support behind Jones.

Instead, he’s let the narrative and debate play out among fans and media members, which led to one of the most bizarre scenes we’ve ever seen play out Monday Night at Gillette Stadium against Chicago.

For Robert Kraft, it’s hard not to wonder a little about what he or Jonathan might be thinking.  After Brady left and enduring their first losing season in over 20 years under Newton, they went from believing the ship may have been righted and headed back in the right direction with Jones, to now wondering if Jones can be fixed and, if not, if Zappe possibly might be the answer.

That’s obviously bad for business, and long-term, it could also be a recipe for a potential disaster.

To take it even a step further – which would be hard to fathom – if neither player pans out, it could ultimately end up as a bad bookend for an otherwise storied career for Belichick.

As great of a coach as he is, in the NFL, it ultimately comes down to wins and losses and the context behind those defeats.  If the setback with Jones comes due to how things were handled this offseason and how they handled this situation, obviously, Belichick will be the one who will shoulder the blame.

If Jones falters and Zappe ends up being just a fun guy to watch but can’t overcome a tough defense the way he couldn’t against Chicago, it stings that much more.

Some of the latest coaches either on the hot seat or have been fired are prime examples.  Matt Rhule didn’t have a quarterback in Carolina despite trades for Sam Darnold and Baker Mayfield.  He got fired.

Unlike Rhule, Frank Reich in Indianapolis is arguably a pretty good coach, but with Phillip Rivers hanging it up, Carson Wentz not being the guy, and now Matt Ryan failing to pan out, his seat is reportedly heating up.

The Browns, the Broncos, etc., the list goes on.  Without a quarterback or the ability to compete for the postseason, no coach is immune.  The revolving doors in Buffalo, New York, and Miami that we’ve seen up close over the years within the Division, with Josh Allen in Buffalo only being a recent exception, are other prime examples.

But the bottom line is that teams that end up below .500 or in the middle of the pack with a fairly talented roster typically see the head coach end up in trouble.

Here in New England, one would think Belichick’s job should be pretty safe. But what if Kraft becomes frustrated with how they handled things with Jones, or if Zappe ends up being nothing more than just a backup?  Or a .500 starter?  How comfortable are they going to be having to start over or potentially having to find (and overpay) another stop-gap veteran?

Kraft isn’t any different from any of the fans.  He’s developed a hunger after 20-straight years of success just like everyone else, with the prime difference being that he’s the guy who pays all the salaries. At 81-years old, he’s also not getting any younger.

Again, time will tell if there’s truly anything to be concerned about.  But if things fall apart for Jones after how he performed last season, the discussion of “how” or “why” will likely be two areas questioned behind closed doors.

It doesn’t matter how good any coach is.  Without a quarterback, winning in a league that has a fair amount of really good ones and several great ones becomes that much harder.

Belichick has said before that coaches can only put players in the position to succeed, it’s up to them to execute.

Hopefully, one of the two players on the depth chart at quarterback can meet those expectations.  If not, things could definitely get ugly around here, and that won’t be good for anyone.

I would love to see the Patriots draft Tim Demorat of Fordham. They could draft him in the late rounds and if they get him it would be an absolute steal.
https://sports.yahoo.com/ncaaf/players/291175/

By: Robert Alvarez
The Patriots show off their customized cleats for the NFL's annual "My Cause, My Cleats" campaign over Instagram.
5 hours ago