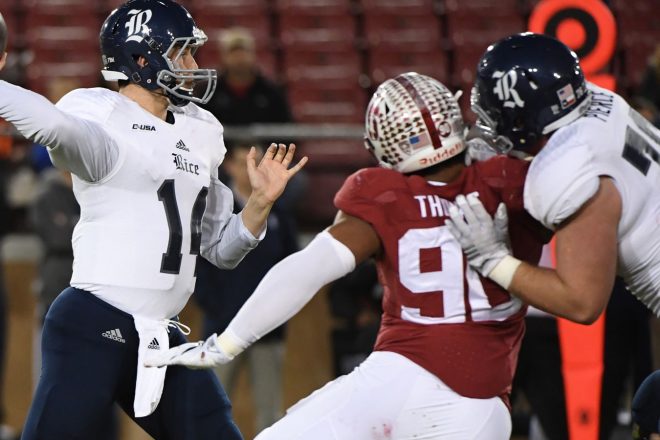 The Patriots are thin at defensive end; Jabaal Sheard has left via free agency and Chris Long has said that he isn’t coming back in 2017. The team did pick up Kony Ealy from the Carolina Panthers in a trade. Ealy has all the tools, he just needs to do it consistently. There has been talk that he didn’t take to coaching in Carolina, something he’ll have to do here to thrive.

That leaves him, Trey Flowers, Rob Ninkovich, and Geneo Grissom. Flowers came on in his second season and was arguably their best defensive lineman down the stretch. Ninkovich seems to be closer to the end of his career now after several solid seasons. Grissom was strictly a STs guy and didn’t contribute on defense. So, they’ll need to add some depth.

Edge rushers are like cornerbacks, you can never have too many good ones and the team is expecting Flowers to continue to improve on his 2016 season. Ealy will be looked at to contribute right away. That leaves Ninkovich and whomever they can bring in. Right now, the Patriots don’t draft until Round 3. But we don’t expect that to last. They’ll try to make a move to slide up into either Round 1 or 2 of the draft. And this next player will be there if they can.

Solomon Thomas from Stanford is a 6’3, 273-pound defensive end that is extremely productive. He had a very good 2016 season with All-American honors and winning the Morris Trophy as the Pac-12 Defensive Player of the Year. Thomas led the team with 62 tackles, 15 for loss, with eight sacks.

Thomas comes from good genes and his mother, father and uncle were all collegiate athletes. He’s versatile and can line up in different positions, something Bill Belichick has liked his edge rushers to do is to slide inside on passing downs in a NASCAR-type package. He can do that and has hand skills and instincts to be a difference maker.

He has excellent power and excellent athleticism, he ran a 6.95 in the 3-Cone Drill and a 4.28 in the 20-Yard Shuttle. He’s very tough and competitive. His motor is always pegged into the red and goes all out on every snap. His instincts allow him to seek out and find the ball carrier and he’s got an explosive first step.

– Good speed and explosiveness off the edge

– Excellent quick, hands, can shed blockers and get to the QB

– Can get too tall at times

– Considered a “tweener” by some scouts

– Guesses at the snap count, seven off-side penalties in 2016

What his Role Will Be:
Thomas’ role would be to initially be a part of the rotation for the Patriots on the edge as a sub-package pass rusher. He will also kick inside at times as an interior pass rusher.

Yes, with some added lower body strength and a bit more pop in his hands, he could easily develop into a full-time very productive player

Thomas is a player who will make an immediate impact as either a sub-package interior pass rusher or on the edge. Some scouts have worried about his length to play on the edge and while that may be true for his measurables, it doesn’t show it on the field.

He already is very good with his hands and has a lightning-quick spin move to disengage himself from blockers. That, along with his athleticism, smooth, quick lateral movement and speed in pursuit will make him a playmaker on the defense.

Thomas is just the kind of player Bill Belichick loves on his defenses. He’s strong, smart, has good instincts and a non-stop motor. He’s versatile and can play multiple positions. He’d be an excellent fit for the Patriots.

If the Patriots can find a way to work themselves back into the second half of the first round, Thomas would be a guy, in our opinion, that they’d jump all over. He’d quickly earn more reps and be productive right off the bat.