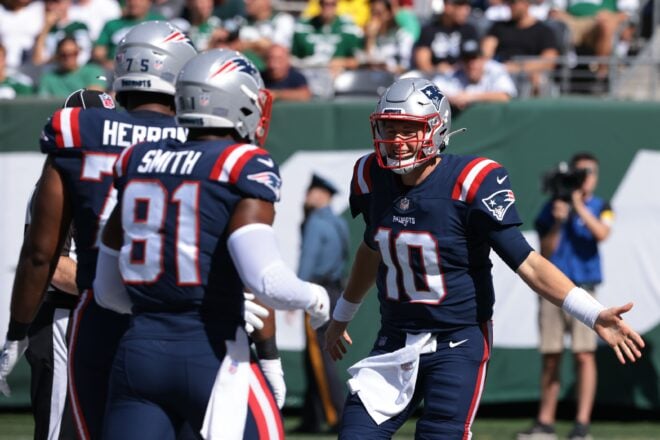 While most of New England has enjoyed seeing Bailey Zappe’s development these last few weeks as Bill Belichick and his staff continue enjoying the windfall from a seemingly home run of a 2022 Patriots draft class, the focus now shifts to the next question.

What does he do about Mac Jones?

Jones, who suffered a fairly significant high-ankle sprain back on September 25th against the Ravens, has been a spectator these last few weeks during a span that was supposed to see veteran Brian Hoyer step in and take over the reins as he recovered.  Instead, Hoyer didn’t make it 10 minutes before taking a hit in the Green Bay that led to a concussion, which thrust Zappe into the spotlight.

And the third-string quarterback has certainly shined.

Zappe came into the Green Bay game and made it competitive, including forcing overtime before Aaron Rodgers finally made a couple of throws to allow the Packers to kick a game-winning field goal in a disappointing 27-24 loss at Lambeau Field.

But Zappe’s since built on that performance over the last two weeks where the rookie has gone 2-0 as an NFL starter while completing 73% of his throws with just one interception.  His lone turnover wasn’t even his fault, as he fired a pass to Nelson Agholor that slipped off the veteran’s fingers and into the hands of a defender.

Sunday in Cleveland, Zappe had his best performance to date after passing for over 300-yards as he completed 34-of-24 for 309-yards and 2 touchdowns in a 38-15 blowout win over the Browns.   That was Zappe’s second-straight win as a starter, which follows up the 29-0 victory last week when the offense put up 22 points against the Lions.

Now, after three weeks, Jones has slowly gotten healthier and Belichick certainly finds himself in an interesting situation.  He’s got a rookie who is playing well and a 2nd-year player who won 10 games last season and got them back to the postseason, while also outplaying his fellow draft class after throwing 22 touchdowns and just 13 interceptions during a fairly successful rookie showing.

Obviously, that success hasn’t quite carried over to this season just yet after Jones and the rest of the starters have had to transition to a new offense, which definitely had some issues during the early part of the season.

The group struggled as a whole during the preseason, and that includes Zappe.  The rookie threw just one touchdown and was picked three times, and that was against other fellow third-stringers.

During the early part of the season, the play collectively on offense wasn’t close to where it is now, with the offensive line being the most notable problem.  They struggled running the football and Jones was under constant duress as he suffered 9 QB hits in the opener in Miami, which led to a back injury on a play where he was hit both up high as well as getting his feet knocked out from underneath him.

He was hit just three times the next week against Pittsburgh, but Baltimore got a fair amount of pressure on him while hitting him four times the next week with three sacks, with the final hit being the one where he took a shot at the end of the game as he was releasing the ball on a target Kendrick Bourne for an interception.

That pick was the third one of the afternoon in what was a frustrating outing where all the positive ground Jones had made was negated by three brutal turnovers, two of which being on targets to DeVante Parker on a day where they forced the football to him 10 times.  Granted, Parker ended up with five big receptions for a career-high 156 yards, but it’s hard not to wonder how things might have gone for Jones if they ran the same style of plays they’ve run these last few weeks with Zappe under center.  Especially given that four of Jones’ five turnovers have all come while targeting Parker.

Meanwhile, with Jones sidelined, Zappe’s rise has seen fans in New England lose faith in the former first-round pick and instead has people talking about whether or not he should even get an opportunity at redemption.

Taking it a step further, many feel Belichick should do as he did in 2001 and ride the hot hand the way he did with Tom Brady when Drew Bledsoe was knocked out with a sheared blood vessel in his lung thanks to the infamous hit by Mo Lewis. 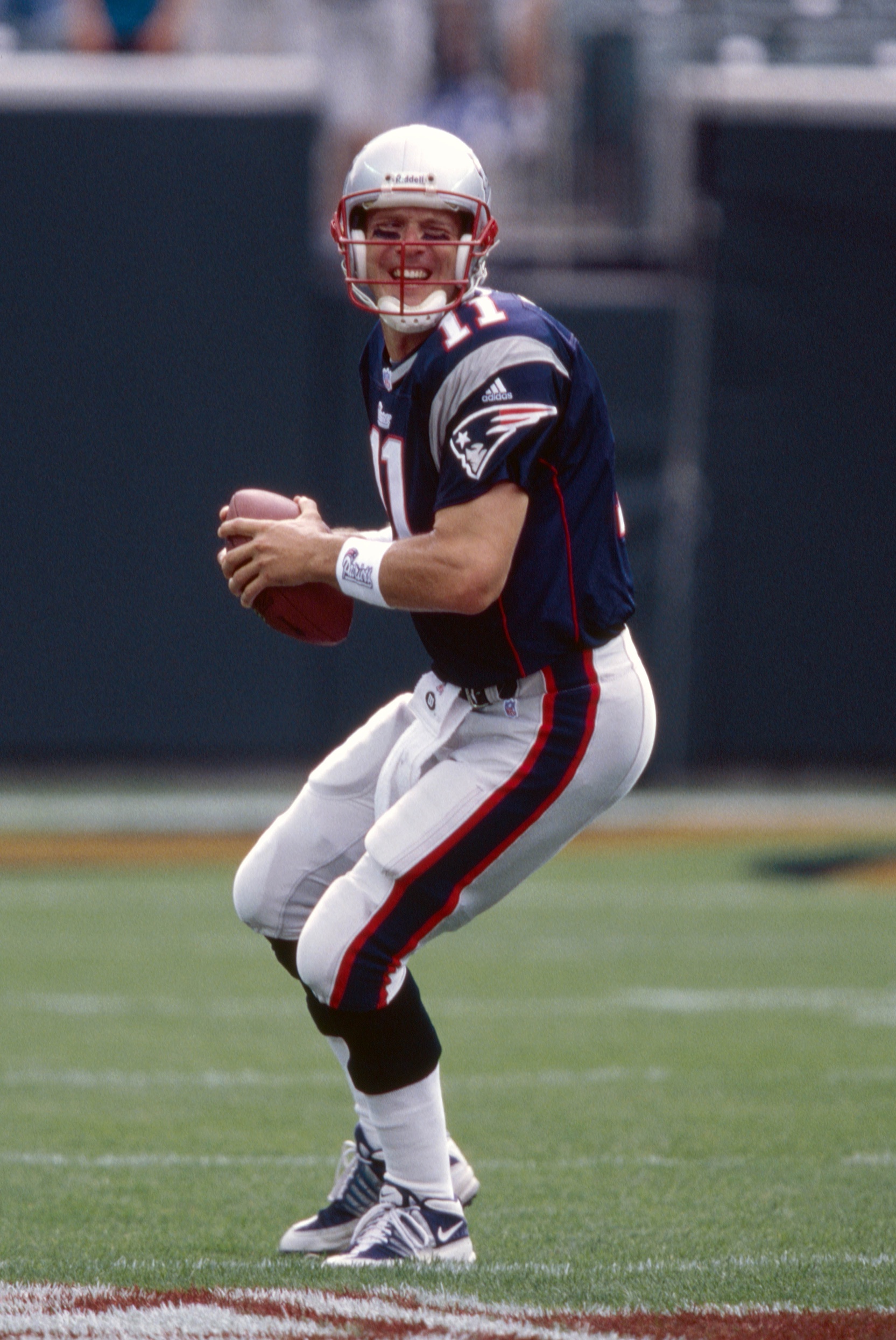 As good as Bledsoe was, there were reasons for Belichick sitting him down. (PHOTO: Matthew Emmons-USA TODAY Sports)

That’s been a parallel people continue to bring up, but it remains a completely unfair comparison. Unlike Bledsoe, Jones is coming off a promising rookie season and then followed it up by an offseason where he’s worked hard and he’s also been a player that coaches and teammates have recognized for that effort, despite the fact things got off to a bumpy start.

While the results haven’t exactly been ideal, the coaching staff is also likely aware of the context behind it which likely explains a lot of the significant changes we’ve seen since Jones has been out of the line-up.

Regarding the Brady/Bledsoe comparison, things are a little different this time compared to then.  Looking at social media and a lot of the people discussing it, there are a lot of people talking about it who were far too young – and probably weren’t even really paying attention until late into that season when they jumped onto the bandwagon – to remember some of the history that factored into that move.

Unlike Jones, Bledsoe didn’t carry over a lot of positives from the season before in 2000, which was Belichick’s first season.  The team finished a miserable 5-11 that year, with Bledsoe finishing just five games that season without throwing an interception.  He also finished with just 17 touchdowns while throwing 13 interceptions.

He had a decent showing in the opener the following season against the Bengals where he threw two touchdowns, but he made a critical mistake when he audibled out of a 4th-and-2 and attempted a quarterback sneak late in the game that ended a drive and couldn’t move the ball again after the defense got it back in what ended up being a 23-17 loss.

The following week against the Jets, Bledsoe threw two interceptions prior to his injury while the offense managed just three points in a 10-3 loss at home at Foxboro Stadium.

Needless to say, at 0-2, things weren’t going well as the team was 5-13 with him under center.  Brady’s ascension ended up being just what they needed, although even he had a few bumps along the way that year.  He didn’t throw a touchdown pass in either of his two starts, with the second-year QB not throwing his first until his third start against the Chargers, which he threw to the late Terry Glenn.

But he had his own ugly outing that year, and many likely remember the four-interception performance he had in Week 7 during a loss in Denver, which was probably his worst showing that season.  Obviously, he got better as the season progressed and we all recall how it ended.  Although, New England was fortunate to still have Bledsoe eventually get healthy because the veteran stepped up when Brady suffered an ankle injury in the AFC Championship game and allowed them to advance to the Super Bowl.

If Bledsoe wasn’t on the roster and they lost that game with Damon Huard under center, who knows how things would have turned out.  Especially when they went 9-7 the following year with Brady and didn’t make the playoffs.

That’s sort of one of the benefits of having a capable player like Zappe as a back-up.  Fans always prefer to have the most talented players from top to bottom playing on their team at all positions.  The Patriots just seem to have that right now at quarterback in Jones and Zappe, which sets up the exact problem every team wishes they had.

However, unlike the situation in 2001, Jones has earned the opportunity for redemption, and sitting him would be detrimental to his development given all of the work he’s put in along with the time the team has invested in him.  Meanwhile, with Zappe currently sitting on the roster as a rookie, the team isn’t in any real rush to make a move because these last two games have given Belichick a pretty good sense when it comes to what type of player he is.

It’s also likely going to play a factor in terms of how they evaluate Jones moving forward, and with Bailey now taking second-team snaps after moving ahead of Hoyer on the depth chart, the dynamic day-to-day will also probably be quite different.  The latter situation is probably the most interesting given that Zappe went from being the third-string guy to now the one potentially nipping at Jones’ heels for the foreseeable future, which Belichick is probably pleased with since it dials up the intensity at the team’s most important position.

But Belichick doesn’t need to make any type of move, because unlike 2001, he also has a one-year edge since Zappe’s a rookie and not a second-year player.  As a result, Belichick has the luxury of time to be patient while seeing if his former first-round pick can get back on track and play at the level he had shown he could perform at last season.

If Jones goes out and plays at a high-level and New England claws its way back into contention, it’s probably safe to say most fans will be O.K. with that, especially while knowing they’re in good hands with Zappe behind him on the depth chart.  If that continues and Zappe fetches a high-round pick down the road that adds talent back onto their roster to help them further, then it’s still a win, especially if Jones goes on to get them back to being a championship contender.

In the event Jones’ struggles continue, Zappe obviously isn’t going anywhere. However, that would definitely change everything moving forward.

For now, all of that is a bunch of “what ifs” but Jones deserves the chance to see if he can thrive in an offense that looks quite different from the one he was under center for nearly a month ago.

If not, maybe Sunday’s game in Cleveland won’t be the last time we see Zappe this season.  But Jones deserves the opportunity to prove that shouldn’t be the case, and it would definitely be a surprise if Belichick doesn’t afford him that chance whenever he’s finally ready to return.