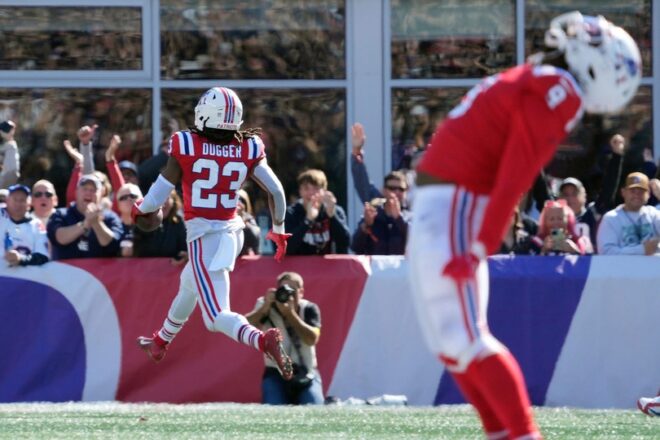 One big storyline from Sunday’s blowout win by the New England Patriots over the Detroit Lions was the fact the Lions went for it on every single 4th down attempt while becoming the first team in NFL history to go 0-for-6 on 4th down.

The primary reason behind that strategy stemmed from the fact Lions came into this game with issues at the kicker position, with Dominik Eberle being waived after having little luck filling in for the injured Austin Seibert.  Seibert had returned to practice Wednesday, but most reports said he still wasn’t quite 100% and he ended up not being out there.

Instead, Detroit had newly signed Michael Badgley active, who it was clear they weren’t comfortable with.  The fact the Lions kept him on the sideline on any attempt where they could have potentially attempted a field goal clearly tells you what their confidence level was in him.

Bill Belichick said on Monday during his weekly appearance with WEEI on The Greg Hill Show that they anticipated each drive being ones that the defense would have to expect to be out there potentially for four downs, and he said his guys stepped up to the challenge.

“No. They go for it more than any team in the league,” said Belichick when asked if he was surprised at how things unfolded. “And then they had … the Lions had some issues/concerns with their field goal kicker, replaced him this week. So I’m sure that was probably part of it, you’d have to ask Coach Campbell, I’m not sure.”

“But, a new kicker coming in, it was windy yesterday. The wind was blowing from our bench to their bench.  It was a pretty decent crosswind. It wasn’t easy to kick yesterday, let’s put it that way. I thought Nick [Folk], as usual, did a great job and handled it as well as you could possibly handle it, but it wasn’t easy.  Certainly, it wasn’t like kicking in a dome or anything like that. So it didn’t surprise me, especially on those longer field goals. Kind of with their kicking situation, we anticipated that and I think the players did a good job of treating third down a little bit like second down because they anticipated, we anticipated there was another down coming after that. So, no it wasn’t a big surprise, no.”

New England’s defense held the Lions to 4-of-12 on third down on Sunday, with the Lions going for it on six of the ensuing fourth down tries.  One of those ended up as a disastrous turnover for Detroit, with Matthew Judon chasing down Jared Goff on a 4th-and-9 late in the second-quarter.  Judon managed to drag Goff down from behind and he lost the football, with Kyle Dugger alertly scooping it up and running it back 59-yards the other way for the touchdown.

The Lions also went 0-for-3 in the red zone, including a terrific interception by Jack Jones, who made an outstanding leaping grab after breaking over to help out linebacker Jahlani Tavai who was covering T.J. Hockenson.  Jones not only went up and made a great catch, but also had the presence of mind to get his feet down in bounds to ensure the interception.

Those two plays were ones Belichick called “game-changing” and he praised Jones’ for having the vision to both pick off the pass and follow it all the way through.

“They’re game-changing plays,” said Belichick.  “Jack [Jones] made a really good play. Jahlani [Tavai] had pretty good coverage on [T.J.] Hockenson. The play they ran – it’s one you’re familiar with, kind of a double seam route there with Hockenson and [Tom] Kennedy – but the hard part about that play was the different levels that the two players were on. Kennedy was about 10-yards ahead of Hockenson so while the corner would try to split those two guys, he really can’t split them because they’re not on the same level, they’re at different levels. Jack just made a really good play seeing the ball and obviously made a great catch, a very athletic play, went up high-pointed the ball, caught it, came down with his feet in bounds.”

With the win, the Patriots improved to 2-3 on the season and will look to get back to .500 this Sunday out in Cleveland against the Browns.

By: Russ Goldman
In this episode, we look back at the Patriots loss to the Bills, Later on, we preview the upcoming game against the Cardinals.
17 hours ago