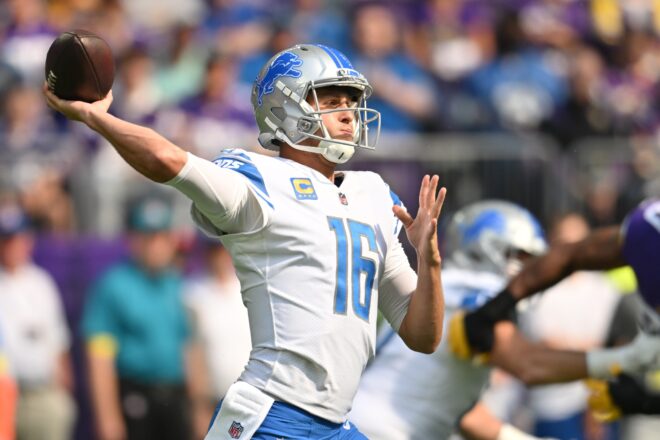 Coach Dan Campbell has the Detroit Lions working hard and together as a team despite a rash of injuries.  Don’t dismiss their 1-3 record.  They are averaging 35 points a game.  However, their Defense has let them down.  Last week they lost at home and gave up 48 points to Seattle and Gino Smith.  They scored 45 points with a decimated lineup.  They were without top running back Deandre Swift and top Wideout Armon Ra St. Brown.   As of the Wednesday Injury report, they had 8 starters that were Questionable and another that was out.

QB Jared Goff has been producing miracles.  He is averaging 281.5 yards passing per game while completing 60.9% of his passes.  He is going to have to be great if he wants to compete against the tough Patriot’s secondary.  Goff is 92 of 151 for 1126 yards passing with 11 TDs and just 3 INTs.

The running game is led by D’Andre Swift the third-year back out of Georgia who was a 2nd round pick in 2020.  He missed last week’s game and has 27 rushes for 231 yards, 8.6 yards per carry, and a TD.  Jamaal Williams is a more than adequate backup as he has 67 rushes for 276 yards and a 4.5 average.  His 6 TDs lead the league running backs. Starting FB Jason Cabinda is already listed as Out.

Wideout health is a problem.  The top 4 WRs for Detroit Did Not Practice on Wednesday.  This needs to be monitored but is a big concern against the tough Patriots secondary.  Armon Ra St. Brown is a terrific young WR, when healthy.  Josh Reynolds has filled in nicely.  The 5-year veteran had 19 catches in just 7 games for Detroit last season.  He produced a 16.1 average and earned himself a two-year, $12M contract with Detroit.  DJ Chark and Quintez Cephus are also Questionable and didn’t practice Wednesday.  The only healthy Wide Receiver is Kalif Raymond who played his college ball at Holy Cross in Worcester.  He was signed as a UDFA in 2016 by Denver and was signed by NY Jets, NY Giants (2), and Tennessee (2).  He found a home last season with Detroit.  They re-signed him this year to a two-year $9.5M contract.   Jameson Williams from Alabama the 2022 1st round pick is still Out recovering from off-season ACL surgery.

TE TJ Hockerson had a big game last week against Seattle with 8 catches for 179 yards and 2 TDs.  He is hurt this week and missed practice on Wednesday.  He could be a matchup nightmare for the Pat’s LBs.

Taylor Decker is the key to the Offensive line.  When he is in the game they are a different team.  This allows prized second-year #7 overall pick, Penei Sewell to switch to RT.  C Frank Ragnow is a bull in a china shop and controls the line of scrimmage.  As you can see by their numbers, Williams (4.5) and Swift (8.6) have run very effectively.  Logan Stenberg and Jonah Jackson play the Guard position.  Decker, Ragnow, and Jackson are listed as questionable

The Detroit Lions Defense is bad.  They have given up an average of 35.25 points per game.  Here is the report card and their ranking:

Michael Brockers and Levi Onwuzurike were two of the worst Defensive Tackles last season.  Onwuzurike is on IR.  Alim McNeill is much better but only ranks #38.  Detroit hopes the #1 pick this year Aidan Hutchinson can provide some pass rush.  He has been inconsistent, getting all three of his sacks in one half.  He leads the Lions in tackles (12) for the D-Line.

This year’s story for Detroit is the play of rookie 6th-round pick (#188) LB Malcolm Rodriquez.  I was very high on Rodriquez coming out of Oklahoma State.  This is what I wrote about Rodriquez in my Mock Draft #4 in April;

Alex Anzalone has been a consistent player for the Lions.  Chris Board is listed as Questionable and Did Not Practice on Wednesday.

The secondary is pretty leaky too Jeff Okudah, the #3 overall pick in 2020 has played just 13 games in two years.  Safety Deshaun Elliott is the top tackler in the secondary.   Safety Tracy Walker was just behind Okudah in tackles and has played one less game.  He is now on IR.  Kerby Joseph has stepped in at Safety.

The Special Teams are nothing to write home about.  Austin Seibert is ranked 26th, just ahead of Nick Folk.  With all the offense the Lions have generated I thought he would be higher ranked.  Punter Jack Fox is ranked # 5.  Jake Bailey is dead last.

Jack Jones had a terrific game against the Packers.  He had a Forced Fumble, Fumble Recovery, and a Pick Six.  He nearly had another pick but missed it and lost his man, but came back and tried to strip the ball from him.   PFF named him the #1 Rookie from Week 4.

Offensive line ratings from PFF are in and Michael Owenu led the team with a 70.2 rating good for the #8 guard.  Cole Strange had another difficult game (third in a row).  His rating was 51.2 which ranked him #46.  The Tackles, Brown was 73.5 and rated #13 while Wynn had a rough day and got benched with a 79 rating and ranked 35.  I am surprised PFF did not rank Cannon who played much better than Wynn.  David Andrews was a 73 and ranked 10th.

Football Outsiders has an advanced metric called Defense-adjusted Value Over Average (DVOA) and the Patriots Run Offense is ranked #1.  They are also rated #1 in Success Rate and Adjusted Line Yards.

Jake Bailey is the worst punter in the league.  He is 29th in both Net and Punting Average.  His shank in Sunday’s game set up Green Bay.

Isaiah Wynn was criticized for giving up the sack that knocked out Brian Hoyer.  Upon closer inspection, Wynn was held by Green Bay’s Kenny Clark and prevented from getting out to block Rashad Gary.  No call.  There were 8 no-calls against Green Bay which is the real difference in this game.

Football Outsider has the Patriots’ Defense ranked #10.  Their run defense is ranked #31 (next to last).  Devin Godchaux and Christian Barmore had awful games against Green Bay.

PFF has Jonathan Jones at 91.5 and Jack Jones at 90.8 ranked as the top two CBs in single coverage.

The Patriots had one spot available on the 53-man roster and filled it with OT Marcus Cannon who played well filling in for the ineffective Isaiah Wynn.

Umass alum Andy Isabella was cut by Arizona Tuesday.  He cleared waivers and found a new home quickly signing with the Ravens Practice Squad.  Would have liked to see him in a Pats uniform.

Late Wednesday night the Patriots signed a depth OT to the Practice Squad.  Sebastian Gutierrez, a 6’5” 308 Tackle played for D2 Minot State.  He was a UDFA signee of Denver this past summer and was cut during the final cutdown.  The street Free Agent was formerly a Tight End and converted to Oline.  He has played Guard, Right Tackle, and Left Tackle.

Detroit’s coaching staff was one of two NFL staff to work and guide the players in Reese’s Senior Bowl.  One of the QBs they coached was Bailey Zappe.  They should be very familiar with Zappe.