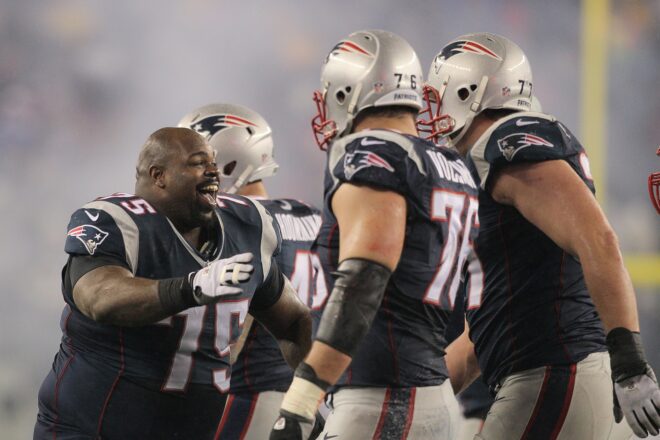 Former New England Patriots nose tackle Vince Wilfork has made his return to Foxborough for his induction into the team Hall of Fame.

On Thursday afternoon, Wilfork stopped by The Hall to try on his red jacket for the first time and chat with the media about his special day.

“This is my first time back [in Boston] in ten years. I landed and feel like we never left,” said Wilfork. “You’re walking through the city and you hear people screaming for you. Boston is always home for me. It always will be.”

Wilfork was also asked to discuss his impact as a Patriot, to which he used his answer as an opportunity to credit his teammates for the success.

“We won a lot because as a team we took it seriously… It was always about the team, it was never about me. Nose tackle is the grimiest position there is…one thing I always tell guys is you got to be versatile. You got to be able to move around. That’s how you become one of the greats.”

Wilfork’s induction into the Patriots Hall of Fame will take place at 4 pm EST this Saturday. It is free and open to the public.

Vince Wilfork: “I made the wall!” #Patriots pic.twitter.com/7t2c9uIstg

Some Vince Wilfork gear on display in the Patriots Hall of Fame, including the gloves and cleats from his first interception.

He’ll be fitted for his red jacket in just a few minutes. pic.twitter.com/zFCmckdTDy

It’s been a minute! How we doing?! pic.twitter.com/zxXcaOl7Kt

How Was This Article?
Posted Under: Patriots News
Tags: Vince Wilfork