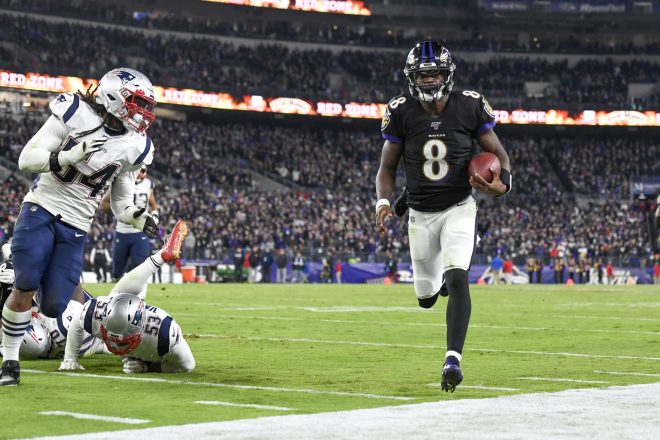 The New England Patriots are continuing to get ready for the Baltimore Ravens, who are looking to get back in the win column coming off of a tough loss against the Dolphins last Sunday.

The Ravens will likely be pretty fired up for this one, and after putting up 38 points, head coach Bill Belichick acknowledged on Wednesday that he and his team will need to be at their best when they play their first home game of the season at Gillette Stadium.

“I think the Miami game really just showed how explosive they are with the kickoff return, long run, long pass for touchdowns,” said Belichick.  “We know they can score on defense with their ability to create turnovers. One of the best turnover teams within the last, whatever, five, 10, 15 years, whatever you want to track it. Strip sacks, ball-hawking guys in the secondary, and an outstanding kick-blocking team, field goals, and punts and returns. They can really hit you on just about every play if you’re not careful. Got to play a good fundamental game, have to play a smart, situational game.”

These two teams always have a tough time against each other, with the Patriots last coming away with a 23-17 win against the Ravens at Gillette Stadium back in 2020.  That one was a battle in a downpour on Sunday Night Football, with Damien Harris finishing as the star in that one.  Harris rushed for 121-yards on 22 carries while averaging an impressive 5.5 yards per carry in the win.

Even more impressive at the time was the fact Harris ended up being the one who delivered the blows that night, grinding down the clock and allowing Cam Newton and the offense to control the game.  They also came out of that one on the right side of two key areas,  both turnovers (Lamar Jackson was picked off in that one) as well as penalties (the Ravens committed 8 compared to just three by New England).

The Ravens also fumbled three times in that contest, one of which happened near midfield on a 4th down play that gave the Patriots terrific field position, while another saw them lose 16-yards and killed the drive, leading to a punt.

In order to win Sunday, they’ll need more of the same.  But even despite the loss to Miami, the Ravens had a solid performance offensively.  Jackson finished the game 21-of-29 for 318-yards and three passing touchdowns, as well as 119-yards rushing which included a 79yd rushing touchdown.

As a result, he remains a big problem that Belichick knows they’re going to have to contain in order to have a shot.  He said on Wednesday that Jackson was among some of the players they looked at prior to when he was drafted in 2018, with Jackson having visited before New England passed up on him twice when they took Isaiah Wynn with the 23rd overall pick, followed by Sony Michel with the 31st pick.  The Ravens would go on to select Jackson at 32nd overall.

Belichick said of their meeting, “Great visit,” adding, “Spent a lot of time with him.  Really interesting guy.”

He also surprisingly acknowledged Jackson’s current contract situation, with the quarterback in the final year of his rookie deal.  So far, he’s tied for second in the league in passing touchdowns with six, having also added another on the ground last Sunday.  Belichick knows how dangerous he is, and also said his eventual contract will likely reflect it.

“Without a doubt,” said Belichick.  “It’s the type of the player, the MVP type of candidate. I think he’s more than answered them. But, we’ll see what his contract is, that will answer them.”

Meanwhile, Jackson was spotted with a sleeve on his arm with a reported elbow injury and was limited on Wednesday, but did tell reporters that he’s “feeling good” and that he expects to be out there.  Anyone wondering what the Ravens might be thinking offensively may have gotten a bit of insight from Jackson, who also told reporters that “I’m gonna throw, Sunday,” adding, “A lot Sunday.”

He also said that he really doesn’t know what Belichick will hold in store for him.

“That Belichick defense [is] a gameplan defense, so I don’t know how he’ll try to play me this season,” Jackson told reporters Wednesday, adding that the weather “played a big part last time we played.”

For now, Belichick expects another big challenge against a team that will likely throw everything they have at them.  These games have always also had a bit of drama, and it’s probably safe to say that will potentially be the case again this weekend.

For now, he knows they need to finish this week of practice strong against a team that will likely be yet another hard-fought game as the Patriots try to improve to 2-1 on the season.

“It’s going to take a good effort from everybody all the way across the board to do well Sunday,” said Belichick.  “But that’s what we’re gearing up for.”

By: Ian Logue
The New England Patriots are continuing to get ready for the Detroit Lions this weekend, with Bill Belichick's team trying to avoid their third straight…
59 mins ago