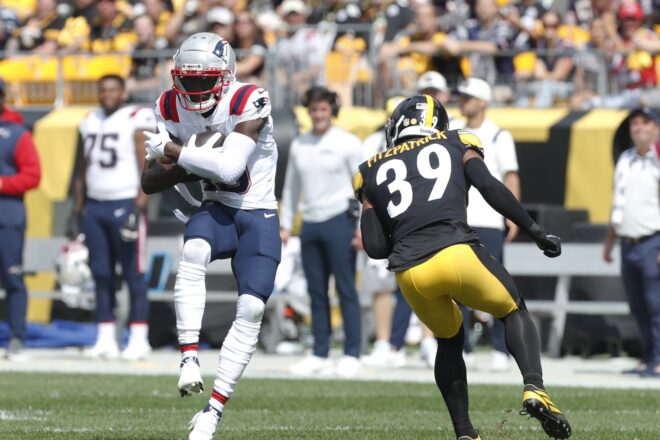 Wide receiver Nelson Agholor put together the best performance of his New England Patriots tenure during Sunday’s win over the Pittsburgh Steelers, recording his first 100-yard receiving game with the team.

Agholor finished Sunday with six catches for 110 yards and a touchdown, but the top highlight was a leaping grab down the sideline where he off shook a tackler on his way to a 44-yard touchdown. We can only presume former Patriot Randy Moss nodded in approval upon watching the catch.

Throughout the summer, Agholor’s name came up in numerous trade rumors, but the Patriots opted to remain patient with the wideout, who is now in the final year of his two-year contract.

To commemorate his breakout game, the Patriots media team put together a highlight video showing all of his top plays in Pittsburgh.

How Was This Article?
Posted Under: Patriots Video
Tags: Nelson Agholor Randy Moss