2 weeks ago at 8:46 am ET
Follow @IanLogue
Posted Under: Patriots News 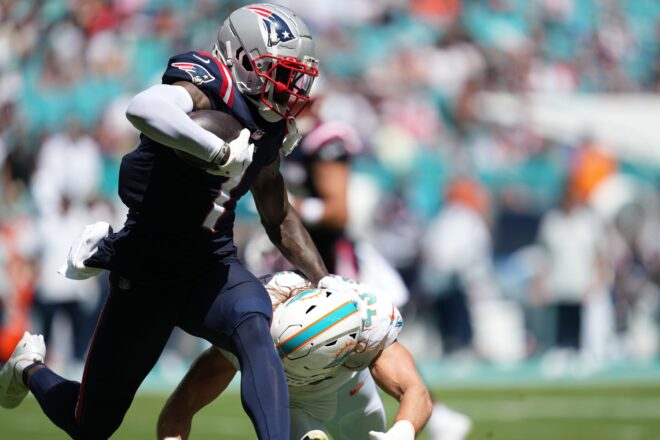 When the Patriots made the move to acquire DeVante Parker this offseason, the goal was likely to get an upgrade from N’Keal Harry and give Mac Jones someone a little more productive and reliable in the offense.

So far through two games, that hasn’t been the case.

Instead, things are off to a rocky start as Parker and Jones haven’t seemed to be on the same page.  In week one, Parker was targeted twice, catching one pass for 9-yards while his other target resulted in an interception on a contested ball in the end zone.

On Sunday, Jones was 0-2 targeting him and one of those attempts was again picked off.  One trend we’re seeing is that each have come on deep plays where Parker hasn’t won the match-up, and neither time Parker has left his feet to go up and at least make it contested.

That was supposed to be an attribute that helped make up for a lack of separation, which has apparently been an issue for the former Miami Dolphins receiver.

Meanwhile, we saw an example of what we hoped we’d see from Parker from Nelson Agholor, who went up and over his defender when he snagged a deep pass from Jones that resulted in a 44-yard touchdown during Sunday’s 17-14 win over the Steelers.

Those two have been in sync so far this season, which is certainly a change from where they were a season ago.  Last year, there was a parallel between these two players as Jones was picked off several times targeting Agholor as the two struggled to connect, which led to a lot of the talk this offseason of people questioning Agholor’s cap hit and whether or not he could possibly have been dealt this offseason.

However, the biggest question with Parker is just his usage to this point.  Given that he was replacing Harry, and what little they gave up to get him, the thought was that he would provide a more reliable target down the depth chart behind three players in Agholor, Kendrick Bourne, and Jakobi Meyers who were already relatively productive in the offense.  Instead, it seems like he’s getting attention at their expense.

That did change as the game progressed yesterday and Parker’s presence did achieve a similar effect we saw when Kristian Wilkerson took the field over Harry last year in their meeting with Jacksonville.  Parker kept the Steelers’ defense honest and drew coverage that opened things up and allowed both Agholor (6/6, 100yds receiving and a TD) and Jakobi Meyers (9/13, 95yds receiving) to be productive and move the football.

Still, Parker is a good player and the example of Agholor’s growth is a reminder that we’ve likely still not seen some of his best moments.  At the same time, with Tyquan Thornton likely returning in the next month at some point, that’s going to further complicate the situation.

With a Baltimore Ravens team that just put up 38 points and is coming off a loss, Jones and the offense is going to need to keep progressing and heaving the football down to a player who looks like he’s struggling likely won’t be the best approach.

Given what we’ve seen so far, how they’re using him doesn’t seem to be working.  While we’re only two games in, it will likely remain a focus as it certainly seems like his role will be examined a bit, especially if they hope to continue making progress in what is quickly becoming an increasingly competitive AFC East Division.

Ian, They should cut Parker. He is occupying a roster spot and will not get better. In the last three years Parker has been 127 out of 127 in 2021, 123 out of 123 in 2020, and 120 of 124 in 2019 in getting separation from DBs. This causes what is known as aggressive throws, those that are thrown into tight windows. The chances increase they will be intercepted. He has one catch and 2 INT. He has the same number of catches as Lil’Jordan Humphrey and 2 yards less. I’d rather have 33 yo Cole Beasley or some young… Read more »

By: Ian Logue
After dropping the opener in Miami and falling last Sunday against the Ravens, the Patriots have come out on the wrong end of two games…
6 hours ago

By: Robert Alvarez
Julian Edelman pokes fun at Bill Belichick following his Wednesday press conference where he reminded the media he was not a doctor.
2 days ago

By: Robert Alvarez
Patriots veteran CB Jonathan Jones plays a challenging "Who You Rather" game in a funny video shared by the team.
2 days ago

By: Robert Alvarez
Check out the mic'd up video footage from the Patriots sideline during the home opener vs the Baltimore Ravens.
3 days ago
wpDiscuz