2 weeks ago at 5:00 am ET
Follow @IanLogue
Posted Under: Patriots News 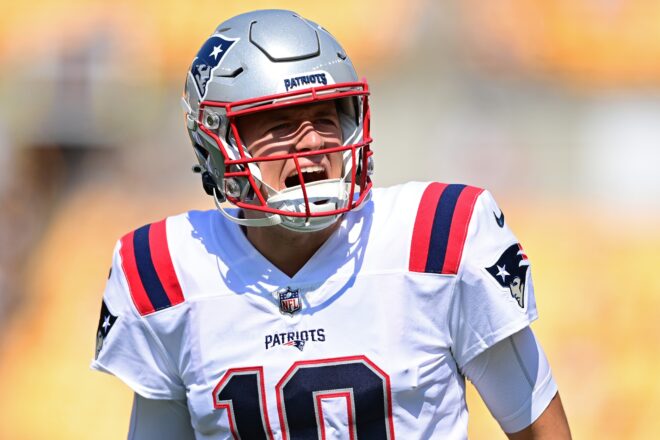 Coming off of Sunday’s Patriots win against the Steelers, here are some thoughts on some players after the team notched their first victory of 2021.

Mac Jones – Jones saw a little more success offensively on Sunday after putting up 252-yards while hitting 21-of-35 for 252-yards along with a touchdown.  But he had an ill-advised interception on a target to DeVante Parker and nearly threw another as he rolled left and caught a break when the defender dropped it.  Overall, Jones seems like he’s thinking a little too much, and it does feel like it’s affecting his play.  While he did play a little better, it still felt like a grind for a player who just doesn’t seem comfortable with things just yet.

Nelson Agholor – Last season, Agholor looked like DeVante Parker in that when Jones targeted him, bad things happened.  Instead, Agholor has settled in and 2022 is definitely off to a great start.  He made a huge play on Sunday, with his 44-yard touchdown as one that was just unreal after the veteran leaped up and snagged the football away from the defender and took off for the touchdown.  So far, he’s been a much-needed surprise in a season where offense in the passing game remains a challenge.

DeVante Parker – He struggled again Sunday.  He was targeted twice without a reception, with one of those passes getting picked off.  He and Jones clearly aren’t on the same page and it’s a little surprising how much playing time he’s receiving.  Parker was thought to be a replacement for N’Keal Harry, especially since he’s not as athletic as Agholor, Kendrick Bourne, or Jakobi Meyers.  However, he’s been getting a little more attention to this point and let’s hope that trend changes in the coming weeks.

Kendrick Bourne – The veteran seemed to get a little more playing time this week and his presence on the field seemed to play a role overall in the team’s success.  Bourne caught just two passes for 16-yards, but the thing that was noticeable was the difference he makes when he’s out there for other players.

Jakobi Meyers – Meyers falls into that category after the veteran caught 9 passes for 95-yards on Sunday. Meyers was also the team’s leading receiver on third down after being targeted six times with 4 receptions, converting three of them.  He remains Jones’ most consistent target, with Sunday seeing him have what will hopefully be the first of many big performances.

Cole Strange – The rookie stepped up in a big way on Sunday and was spotted on several occasions making some key blocks for an offense that was successful both in the passing game and running the football.  Strange found himself holding his own against Steelers defensive tackle, Cameron Heyward, which is impressive considering how tough he is to deal with.

Damien Harris – Harris was outstanding on Sunday, carrying 15 times for 71-yards including a touchdown as he finished the afternoon averaging 4.7 yards per carry.  Harris also played a key role at the end of the game as the Patriots burned nearly seven minutes off the clock to close out the contest, with Harris picking up the final two first downs to seal the victory.  However, Harris was seemingly hurt on his final carry and hobbled off the field but told reporters after the game that he’s fine, which is definitely good news.

Rhamondre Stevenson – Stevenson had a solid showing after he carried 9 times for 47-yards, averaging 5.2 yards per carry against a Steelers defense that had a tough time dealing with him.  Stevenson is a punishing back who also was the lead back early in the team’s final game-clinching drive, before Harris finished things off.

Deatrich Wise Jr. – Had another strong performance, finishing with four tackles and was disruptive yet again.  The defensive captain followed up a good showing last week in Miami and will likely see a pretty good challenge up front against Baltimore next weekend.

Mack Wilson – His diving deflection early in the contest that helped force an interception played a role in setting the tone, but his overall performance thus far has been solid.  We’re only two games in, but it should be interesting to watch his growth in the coming weeks as New England continues their transition to a younger and faster group.

Jabril Peppers – Came in and stepped up when Kyle Dugger went down, which was much-needed.  He’s a big, tough player who showed on Sunday how valuable he is, especially after he made two straight plays that helped stall a Steelers drive and force a long field goal.

Hunter Henry – He’s been invisible to this point, which is surprising given what we saw last season.  Henry, who is Jones’ neighbor, was targeted just once on Sunday on a ball he had no shot at, and it’s just bizarre how few targets he’s seen to this point.

Jonnu Smith – Smith also had a tough showing on Sunday.  He was targeted three times without a completion, and as the Patriots continue trying to get other players involved, the inability to get the ball in his hands obviously remains a problem.

Lil’Jordan Humphrey – He was active and was also involved early in the game, which was surprising.  He caught one pass for 11-yards, but the fact he was even on the field ahead of other starters is a head-scratcher, especially considering a lot of what we just mentioned.

Brenden Schooler – He was terrific on Sunday and has been so far after becoming a standout on special teams.  He was completely uncovered on the muffed punt by Gunner Olszewski, ending up as the first guy there and immediately snatched up the football when Olszewski lost it.  Oddly enough, it will be interesting to see if the Patriots work on a fake punt going forward as, with no one on him, there was a potential missed opportunity to extend the drive.  Granted, the recovery saw them score anyway, but if Schooler has good hands, you’d have to think they’ll be prepared in the event that situation ever comes up again.