1 month ago at 9:57 am ET
Follow @IanLogue
Posted Under: Patriots News 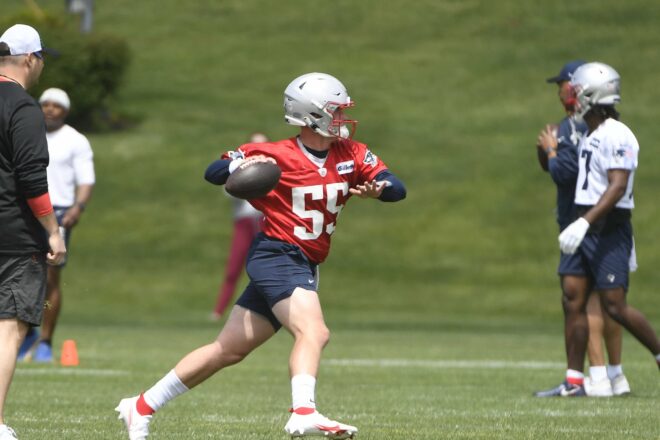 Some Patriots news and notes on this Friday:

– There was some good news on Thursday night as the New England Patriots managed to get their final three draft picks under contract, with Cole Strange, Tyquan Thornton, and Bailey Zappe each tying up one final loose end heading into training camp.  The big question is how they were able to do it.  According to Patriots cap expert Miguel Benzan, the club had just $142k in space as of yesterday, which means that there were likely one or more deals that were adjusted in order to provide the space to get those deals done.  Benzan pointed out that the club needed at least $1.75 million in space cleared in order to get them signed, but they’ll still need additional space heading into the season in order to account for additional contingencies.  How they’ll get there remains something to keep an eye on, but the fact those three deals got done is also curious and it will be interesting to eventually find out which deals potentially got re-worked in order to make them happen

– Patriots rookie defensive back Jack Jones continues to garner praise heading into training camp and it seems like word is getting out about the strong performance he put forth during OTAs.  The fourth-round pick has already been considered to be one of New England’s best picks of this year’s draft class, with multiple draft experts believing that he’s got the skillset to be successful in the NFL.  Those traits were apparent during OTAs when Jones spent time with the first team and immediately settled in, wasting little time helping the defense create turnovers.  Bleacher Report reporter Alex Ballentine went through his list of rookies who he believes appear to be steals and Jones name made the list, with Ballentine noting that while the Patriots may not have an All-Pro cornerback on their roster, if Jones turns into a starter that’s obviously terrific value for a player they were able to find in the fourth-round.

– There was some interesting news on Thursday about the potential future of Gillette Stadium, which was recently selected among venues that will hold the FIFA World Cup in 2026.  In order to be able to host the event, one requirement is going to be for the stadium to remove the existing artificial turf and go back to a grass surface, which will require some upgrades to the facility in order to be able to support it.  The stadium initially had an irrigation system in place as the venue previously had a grass surface when it opened back in 2002.  However, they replaced it with Field Turf back in 2006, with the club since upgrading the artificial surface to newer versions, including one that happened in 2017.  They’ll now have to update things to support a grass field for the FIFA event, and there were initial reports that they would potentially stay with grass.  New England Revolution head coach Bruce Arena said on 98.5 The Sport Hub that “It’s going to be permanent,” and “I don’t think the artificial field is coming back to Gillette again.”  However, an email from Revolution director of communications to NESN instead confirmed that won’t be the case, and that the change will only be temporary.  Given the weather climate in New England, it’s not surprising, although most football purists would prefer to see the natural surface return permanently.

– There have long been debates when it comes to player safety, and things seem to be split when it comes to the league’s playing surface.  The NFLPA had an article with Players Association President JC Tretter writing that he feels artificial surfaces are detrimental, noting that players “have a 28% higher rate of non-contact lower extremity injuries when playing on artificial turf. He also adds that, “of those non-contact injuries, players have a 32% higher rate of non-contact knee injuries on turf and a staggering 69% higher rate of non-contact foot/ankle injuries on turf compared to grass.”  He’s pushing for the league to return to natural grass surfaces, saying “NFL clubs should proactively change all field surfaces to natural grass” and points out teams like the Packers, Steelers, and Browns have successfully been able to maintain their surfaces despite the cold weather conditions in each respective city.

– The company FieldTurf conducted their own study and found that the ACL Injury Rate per Team Games played over a 4-year study was .048 with their surface, .050 with Natural Grass, and .053 with a Competing Turf System.  They also noted in college football that their surface led to 11% fewer concussions, 31% fewer ligament tears, and 21% fewer severe injuries compared to natural grass.  They also looked at Achilles injuries but found no significant difference between their surface and natural grass.  Still, Tretter would prefer to see all teams go back to grass.  “There is room for innovation by artificial turf manufacturers,” he wrote.  “But until the risk of injury on turf mirrors the risk on grass, playing on turf is not in the best interest of our players.”

– We obviously heard plenty of good things about wide receiver Tre Nixon during OTAs, but it was interesting to go back and look at some news from around this time last year where both Isaiah Zuber and Devin Ross made some noise during last year’s minicamps, with Ross being rewarded with a contract at the time.  Ross was on the club’s practice squad for part of the 2020 season and was seemingly in the mix of players in 2021 who had a shot at possibly ending up competing for a roster spot last preseason.  Instead, he was among the final cuts last August and is now in the USFL playing for the Michigan Panthers.  It’s a reminder that how a player looks in the spring isn’t what matters, which will be important when Nixon gets back out there a little over a month from now.

– Former Patriots quarterback Scott Zolak had high praise for Mac Jones this week, and he said of the coaching staff, “they like the quarterback more than people think” and that “he reminds us of [Tom Brady].”  But one thing that Zolak pointed out is the fact that despite all the issues and questions surrounding the coaches on the offensive side of the football, Zolak believes the one-on-one time that Bill Belichick spends with the second-year quarterback is going to potentially be what helps him truly take the next step.  “Belichick 1-on-1 with Mac Jones can be the guy that helps him ascend in a year or two and not regress,” said Zolak via NBC Sports Boston.  “And that could be all the difference in the world.”

– For anyone who is a fan of Budweiser, their “Bud Light” brand has apparently become the “Official Beer Sponsor of Tight Ends”, which featured a photo of 49ers tight end George Kittle holding a tall can during a recent Instagram photo.  The timing is obviously a little disappointing given the recent retirement of Rob Gronkowski, since everyone remembers him pounding down a Bud Light and then spiking it during the team’s championship parade back in 2015.  But the press release on them becoming the sponsor for the position was still a little humorous, as was the photo of Kittle holding a can labeled “Kittle Light”.

– Wide receiver DeAndre Hopkins broke his silence and is maintaining his innocence regarding his PED suspension.  The substance he’s said to have tested positive for is ostarine, which according to SportingNews.com is “a Selective Androgen Receptor Modulator that isn’t approved for human use of consumption in the U.S. or any other country”.  Hopkins, who was suspended for six games due to the positive test, said the league found 0.1 in his system and claims that due to that number, “it’s contamination, not something taken directly,” adding, “I don’t take any supplements. I’ve never taken supplements. I barely take vitamins.”

– The Atlanta Journal-Constitution had an interesting story on Falcons receiver Calvin Ridley, who was suspended indefinitely back in March after it was learned that he bet on football following his departure from the team in November to deal with mental health issues.  According to the report, the embattled receiver, who they point out was putting up numbers similar to former Colts receiver Marvin Harrison at this point in his career, made $1500 in bets that will now cost him the $11.1 million he was set to receive in salary.  He’ll be out of football for a while, with the earliest time he can reportedly petition for reinstatement being February 15th of 2023.  Agent Lee Steinberg talked about the dangers, in general, facing the league when it comes to gambling and while Ridley’s didn’t impact any outcomes, it’s still something Steinberg believes the NFL will need to be wary of.  “If fans ever started to speculate that what they were seeing in front of them was a performance shaded or tainted by someone with gambling debts, that was in serious trouble with a bookie, like Art Schlichter, then all of a sudden, instead of dominating sports … it would lose massive amounts of popularity,” Steinberg said. “The point is, that this stokes the deepest fears of the NFL, about compromised results, undermining the foundation of the game.”