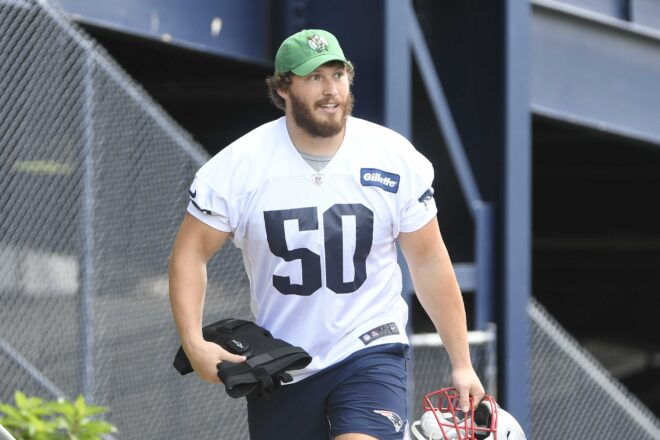 The Patriots reportedly got their final three draft picks under contract, with Cole Strange, Tyquan Thornton, and Bailey Zappe each signing their rookie deals heading into the start of next month’s training camp.

While this is obviously good news, the next question is how the team was able to get their final selections signed given how close to the salary cap they’ve been.  At last check, according to salary cap expert Miguel Benzan, the club had been sitting with just $142k of space available.  The team needed to free up an additional $1.75 million in order to get this done, which right now is a mystery.

There were no players cut or traded, which means the team did something internally with another contract (or multiple deals) in order to get all three signed.  Benzan has a few thoughts, which included converting several salaries to get this done.

By my calculations, the Patriots need to create $1.75M in cap space in order to sign Strange, Thornton, and Zappe today. Am waiting to find out exactly how they created the cap space. As soon as I find out I promise to let you know.

So we now know the cap space needed to sign the 3 draft picks today was made NOT by a cut or a trade. It was done via a restructure/paycut or an extension.

Converting all but the minimum of the salaries would create the below cap space amounts. No void year use.

(2/2) They could extend these players to deals.

Hopefully, we’ll get an answer in the coming days but for now, getting these guys signed and removing that last obstacle is definitely a nice step forward.  Now, with the money part of things out of the way, the next time they return to Foxboro they can simply focus on preparing for the upcoming season.

By: Ian Logue
The Patriots tied up some loose ends after getting Cole Strange, Tyquan Thornton, and Bailey Zappe each under contract on Thursday.
40 seconds ago

By: Robert Alvarez
Rookie receiver Tyquan Thornton shares a photo over Instagram confirming he has signed a contract with the Patriots
5 hours ago

By: Robert Alvarez
The best social media posts and reactions to Rob Gronkowski's decision to retire from the NFL for a second time.
6 hours ago

By: Mark Morse
This week we are looking at the New England Patriots TE group.
6 hours ago
wpDiscuz