1 year ago at 9:08 am ET
Follow @IanLogue
Posted Under: Patriots News 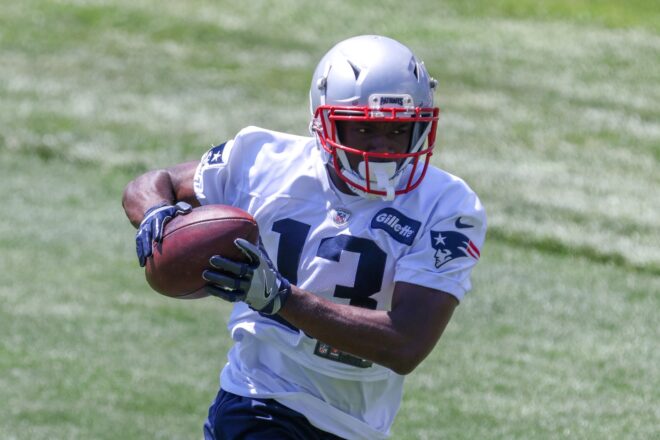 1) Coming out of minicamp, it’s starting to seem like there might be some uncertainty when it comes to the wide receiver position, which given the acquisitions this offseason seems a little concerning.

The team signed both Nelson Agholor and Kendrick Bourne, with the two seemingly being two nice additions to the roster.  Agholor was a player some had thought might thrive with a change of scenery and better coaching, while Bourne was a player who many fans out in San Francisco were sad to see go because he was quietly a solid player for them.

But according to reports, both players were inconsistent during minicamp.  Agholor’s speed was evident but he reportedly had a fair number of drops, while the same could apparently be said for Bourne, which is obviously not the type of news we were hoping to hear with just over a month until training camp starts.

Two players who reportedly made impacts were Isaiah Zuber and Devin Ross, with Ross being rewarded with a contract on Monday.  Ross was on the club’s practice squad for part of last year but clearly put in the work and he’s earned an opportunity to be in the mix of players who we’ll see next month competing for a roster spot.

That being said, what seemed like a pretty solid group seems to have some questions, which could make things interesting.  Reports out of camp were positive on Gunner Olszewski, who has continued building himself physically and several have said he looked explosive with the ball in his hands, which could make him a dark horse candidate to be a factor.  The same can be said of Tre Nixon, who has also gotten some attention and Karen Guregian of the Boston Herald recently wrote, “He looks like he could be player”.

However, from all indications, Jakobi Meyers looked the most impressive and the media members on hand seem to believe he’s poised for a solid year, although the hope was to have him as part of a talented group to allow him more opportunities.  But so far, he’s reportedly been the best-looking player of the group and that’s sort of not ideal.

N’Keal Harry had moments where he looked like he’s made some progress, but he’s been said to “look choppy” and still lacking the fluidity that is expected from a player of his caliber, which still makes him a question mark.  Harry has been subject to trade rumors all offseason and his situation remains one to keep an eye on.

For now, for a group that was supposed to be improved heading into this year, it instead seems like one that has quite a few question marks.  For a Patriots team that’s trying to get back to becoming a championship contender, the only way this works out is if guys emerge as difference-makers because the early indications haven’t been encouraging from the players who were supposed to make an impact.

That could obviously change, but there’s a cloud of doubt over this receiving corps that is unexpected and if they plan on bouncing back from last year’s 7-9 campaign, the Patriots will need things to unfold differently when they hit the field again next month.

2) For anyone who rooted for former special teamer Nate Ebner in the last Olympics, the 32-year old had also been looking to compete for a spot in the Games this summer but it sounds like that won’t be the case.

Ebner has instead reportedly suffered an injury that he says will require surgery and his recovery time it “did not align with trials for the Games”.

Ebner, who is now a member of the New York Giants, thanked the club for allowing him to “chase another dream” and he expects to be ready for the 2021 football season.

3) One player who quietly got some attention during minicamps was fifth-round pick Cameron McGrone, with the former Michigan linebacker being spotted on the field taking things in.

McGrone is coming off of an ACL surgery and Bill Belichick admitted after his selection that he wasn’t expected to be a factor this year.  However, according to Boston Sports Journal’s Greg Bedard, people within the organization seem to be excited by his potential, which is definitely interesting.

The fifth-round pick is coming off ACL surgery so he’s not expected to be seen in action on the field anytime soon, but it seemed very encouraging that the Michigan product was omnipresent on the practice field during the OTAs and minicamp. I mean, McGrone was on the field all the time and not just watching — he was talking with other player and coaches as the periods were going on. That’s the kind of stuff a future field general does and that seems to be the hope for McGrone — people inside the building are excited for his future, and his recovery is going really well.

Bedard also writes that, “With his recovery doing so well, it’s not out of the realm of possibility that McGrone is actually participating by the end of the season, but it is doubtful. However, it’s rare to hear this type of optimism from people around the team. It’s there, however.”

The emergence of another player at that group definitely wouldn’t be a bad thing.   It’s tough to say how much longer Dont’a Hightower plans on playing and the team is in need of continuing to infuse young players into the mix, so the fact McGrone seems to be recovering well is definitely encouraging.

4) The biggest quote circulating the internet right now was of Tom Brady, who when speaking during an upcoming episode of HBO’s “The Shop” made a surprising comment when it came to his NFL future.

During his free agent tour last offseason, Brady apparently had one team lose interest in him at the end.  He made his thoughts known in the clip, saying, “One of the teams, they weren’t interested at the very end.  I was thinking, you’re sticking with that motherf—–?”

According to Jeff Darlington, he believes the team Brady was talking about was the Saints.

“I’m gonna say it as clear as day: it is the New Orleans Saints,” Darlington said via NBC Boston. “Regret might be a strong word because ultimately, Drew Brees decided to delay his broadcasting career and come back for one more season. The Saints did the right thing by bringing Brees back. But I think that people still underestimate how close Tom Brady was to signing with the New Orleans Saints up until he ultimately decided on the Bucs. I know that that’s gonna be a statement people try to question. It’s the truth.

“And here’s the deal: Sean Payton cannot look back and say, ‘Man, I would have loved to have Tom Brady last year,’ because it would also have meant that they would have him for a few more years moving forward. No question in my mind. The Saints, despite understanding they did what they had to do, there’s a little bit of, let’s call it regret, that Tom Brady is not their quarterback.”

That would be a surprise.  Brady and Brees appear to be good friends and spent quite a bit of time together after their final postseason meeting where Brady beat him to advance in the playoffs.  The veteran even spent time throwing passes to one of Brees’ children.  So if there was any type of doubt or animosity, it certainly wasn’t evident.

5) After creating “National Tight End Day”, George Kittle also went on to be a part of putting together “Tight End University”, which players from that group can get together to work on their skills.

It’s similar to Von Miller’s camp, which helps pass rushers do something similar.  But Kittle was questioned about the fact that this year’s group of invites didn’t include Tim Tebow and his response was definitely interesting.

“If I can’t invite every tight end, how do I not invite a second- or third-string guy on a team that’s been playing tight end since he was 18 years old in high school?” Kittle said via ESPN. “Nothing against Tim Tebow. I hope that he has incredible success this year. I hope he has 10 touchdowns. I hope he has a great year, but it’s hard for me to invite someone to this that just started playing the position when I can’t invite a guy that’s been playing it for eight to 10 years. That’s just hard for me.”

He makes a great point.  Tebow was thought to have been a player who would have been a good tight end back during his playing days but he refused to back down from playing quarterback.  With new head coach Urban Meyer trying to breathe life back into Tebow’s career, it remains to be seen whether or not things will work out for him and there have been whispers internally about players not being happy about it.

Not that it really matters too much.  The Jacksonville Jaguars have problems that go far beyond Tebow, so they already face an uphill battle while hoping new quarterback Trevor Lawrence can turn things around.  Whether or not Tebow contributes to that success will be something everyone will be keeping an eye on, but it’s, unfortunately, an experiment that should have happened long before now and it will definitely be interesting to see if he makes their roster.

By: Ian Logue
When it comes to beating the Green Bay Packers on Sunday, the New England Patriots just need to do something they haven't been able to…
9 hours ago

By: Robert Alvarez
Check out the mic'd up video footage from the Patriots sideline during the home opener vs the Baltimore Ravens.
10 hours ago

By: Ian Logue
The big question heading into this weekend for the New England Patriots will clearly be whether or not back-up quarterback Brian Hoyer can get the…
12 hours ago

By: Mark Morse
Green Bay comes into this game with a 14-game home unbeaten streak.  It's third to two Patriots records of 16 and 18 games.  They are…
16 hours ago
wpDiscuz