3 weeks ago at 11:32 am ET
Follow @IanLogue
Posted Under: Patriots News 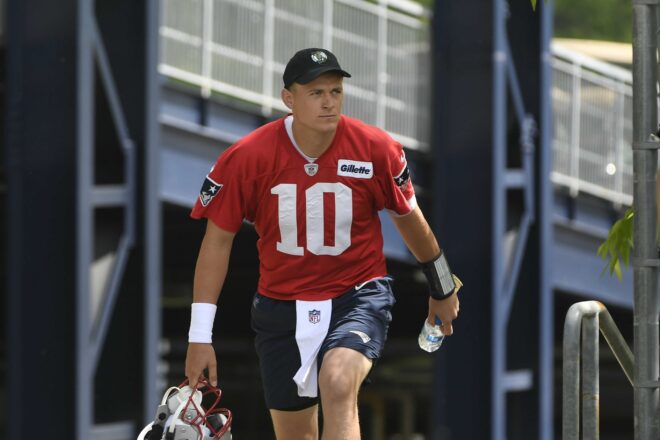 It was another big day media-wise down at Gillette Stadium as the New England Patriots held their second day of mandatory media camp, which was open to reporters.  Here’s a quick rundown of what went down there Wednesday:

– Mac Jones had another solid showing, which followed up a terrific effort on Tuesday.  He reportedly wasn’t quite as sharp as the day before, but he overall looked fairly sharp and there has seemed to be an emphasis on downfield throws, with Jones reportedly hitting 4-of-5 of his attempts beyond 20-yards.  He had one interception, which reportedly came after a ball glanced off Kendrick Bourne‘s hands, which Malcolm Butler alertly came away with.

– Of his deep attempts, Tre Nixon again reportedly hauled in two of them, with Nixon again having another big day.  He reportedly made a one-handed grab on a bomb from Jones of 60-yards against Jonathan Jones which resulted in a touchdown.  Those two players have been battling it out this week after Nixon also got the better of him Tuesday.

– Jakobi Meyers has reportedly been limited during these early sessions, which is what opened up the door for Nixon to shine.  Whatever is ailing Meyers isn’t known and Bill Belichick wouldn’t provide any details.  “We have various players out there that are in different stages of some physical situation whatever it is,” said Belichick. “Some of that changes day to day some of that is progressive. Whatever it is it is.”

– Jack Jones reportedly got matched up against Nelson Agholor several times during practice on Wednesday but apparently held his own.  Agholor was among the four players who hauled in a deep ball from Mac Jones, with one of those coming against the rookie defensive back.  However, Jones did manage to force a turnover from the veteran after forcing a fumble.  He also reportedly had an interception against rookie QB, Bailey Zappe.  Jones, again, also spent time in the return game.

– Pierre Strong reportedly joined Ty Montgomery returning kicks in the kicking game.  Strong has been said to be a player who hasn’t gotten a whole lot of press during these sessions and it’s going to be interesting to see if his role increases next month and if he’ll earn himself a role in the offense.  Montgomery, meanwhile, also reportedly worked at both receiver and running back Wednesday.

– While Bourne was back on the field after being absent on Tuesday, he apparently looked a little rusty.  He and Jones struggled to get on the same page and had the earlier play where he seemed to lose his footing and the ball went off his hands and into Butler’s for the turnover.  He also reportedly muffed a punt, which led to him having to run a lap.

– Offensive tackle Isaiah Wynn reportedly got more work again at the right tackle position, which is where he was also spotted lining up on Tuesday.  Wynn wouldn’t elaborate on the potential change, “Do I like the change?  It’s wherever they need me,” he said, smiling.  Wynn also said he didn’t play there in college and the last time he got any work there was his rookie year.

– Wynn was asked whether or not there was any discussion about a change prior to his arrival and it sounds like the topic was brought up before he got here.  “Something along those lines,” he said repeatedly, smiling.  “I’m good man.  Hey, listen, wherever they need me.  They put me at corner, I’m going to try and go play corner.”

– About his absence during OTAs prior to this week. Wynn said, “I mean, it’s voluntary.  I was working.”  Wynn, despite his smile, did seem a little off, which led one reporter to ask him if he was happy with his fifth-year option or if he was looking potentially for a new contract.  “I ain’t worried about no contract right now,” said Wynn.  “I’m focused on being the best player I can be for the team so we can move forward to the season.  I ain’t worried about none of that right now.  That will come when it comes.”

– The veteran tackle was also asked if his absence at OTAs potentially led to the decision to move him to right tackle.  Wynn simply repeated “I can’t answer that for you, you’ll have to ask coach,” each time he was asked, which was essentially three times.  He did point out that he also wasn’t here during the voluntary portion of OTAs last year.  “I wasn’t here for OTAs and all that.  I did the same training and all that as I did last year.  This ain’t new.”

– Veteran tight end Jonnu Smith was the other player who hauled in a big play from Jones, with the two reportedly connecting on a 25-yard play against Kyle Dugger where Smith went up and made a nice grab over the veteran safety.  Smith is coming off a season where he caught just 28 passes, which was the lowest total for him since the 2018 season.  He’s been more involved this week, which will hopefully mean he’ll be improving on that total in 2022.

– At one point in practice Wednesday, Belichick was spotted stepping in at center for shotgun snaps to Jones.  Belichick, who did play up front during his college days, did point out that, “We didn’t have shotgun then. We didn’t run the shotgun,” he said.  When asked if he likes showing the guys if he’s still got it he replied, “Yeah, I’d like to be matched up against a couple of them.”  He was then asked if there was anyone in particular?  “Yeah, there’s a couple.”

Linebacker Matthew Judon, who is in his second year here in New England, said he feels more comfortable with the defense heading into 2022.  “I’m so much more prepared,” said Judon. “We’re all speaking the same language and I can talk to my coaches differently this time than last year.” … When asked about Wynn’s move to right tackle, as expected, Belichick offered up little there.  “We build our depth in training camp and in the spring and we will see what we need in the fall,” he said.  “I don’t know.” … Neither rookie Andrew Stueber or Chasen Hines was spotted this week.  When asked, Belichick simply said, “They’re not ready to be out there.” … The team has reportedly canceled Thursday’s session due to heavy rain in the area… Mac Jones has reportedly been wearing a black sleeve on his calf as well as sporting a knee brace on his left knee.  He wore the knee brace during his rookie season and did have one play where it might have saved him, so it will be interesting to see next month if that continues.

By: Ian Logue
New England Patriots news for 7/1 along with NFL notes in today's daily notebook.
4 hours ago