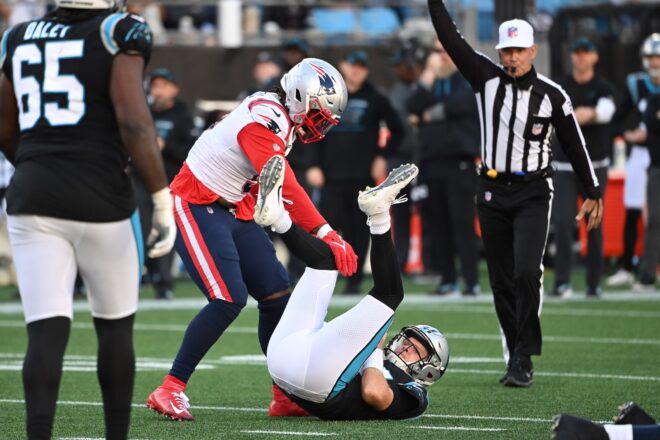 Down in Carolina, barring a trade, Sam Darnold appears to be the favorite to get another chance at redemption in 2022.

The former Jets quarterback started off last season in terrific fashion.  The Panthers went 3-0 to start the year but Darnold began to struggle and Carolina then lost four straight.

Over that span, there was some cause for patience as the Panthers lost the first three games during that streak by 8 points or less (36-38 at Dallas, 21-18 vs Philadelphia, and 34-28 vs Vikings).  But the 25-3 loss on the road against the Giants was seemingly the one where Darnold really began losing the confidence of the coaching staff.

They did beat the Falcons 19-13 the following week after Darnold completed 13-of-24 for 129-yards with no touchdowns but he didn’t turn the ball over.  However, the game against New England the next week sealed his fate after Darnold was picked off three times and was beaten by a rookie quarterback in Mac Jones during a 24-6 blowout loss at home.

That saw Cam Newton rejoin his former team, with Newton finishing out most of the season, although he didn’t fare a lot better as the Panthers lost 9 of their final 10 games.

Newton has gone unsigned for much of the offseason, but one report said the door is open for him to return as long as he’s willing to accept less money and be O.K. with knowing he’s not entering training camp as the starter.

As for Darnold, he seems to be entering into a do-or-die season, with all the competition having motivated him.  They drafted Matt Corral in the third round last month, but Carolina has also been among the teams rumored to potentially be in the mix for either Baker Mayfield or Jimmy Garoppolo.  But the fact they’re pondering bringing Newton back could mean they’re about to close the door on any potential trades.

Likely knowing that this is probably his last real opportunity to hold onto being an NFL starter, Darnold’s been putting all he has into getting better.  He’s reportedly improved a lot of his mechanics and has looked strong early on, with head coach Matt Rhule seemingly happy with what he’s seen.

Rhule said that one of the most notable changes is the change in the veteran quarterback’s approach, which Rhule credits new offensive coordinator, Ben McAdoo, for helping Darnold improve his confidence.

“I think Sam is having a really good offseason so far,” Panthers coach Matt Rhule said via the Charlotte Observer. “I think he’s really, really developing technically. So I’m pleased with where he’s at so far.

“He’s completely bought into Ben’s way of doing things. I think you see a calmness now.”

Whether or not it translates into real success in 2022 remains to be seen, but there’s still a long way to go as Darnold tries one more time to live up to his potential.

(Editor’s Note: Portions of the above appeared in this morning’s news/notes column.)

By: Ian Logue
New England Patriots news for 6/30 along with NFL notes.
3 hours ago

By: Mark Morse
This week we will analyze the New England Patriots Defensive Backs.  The Defensive Backs are going to make or break the team this year.
1 day ago