9 months ago at 5:00 am ET
Follow @SteveB7SFG
Posted Under: Patriots News 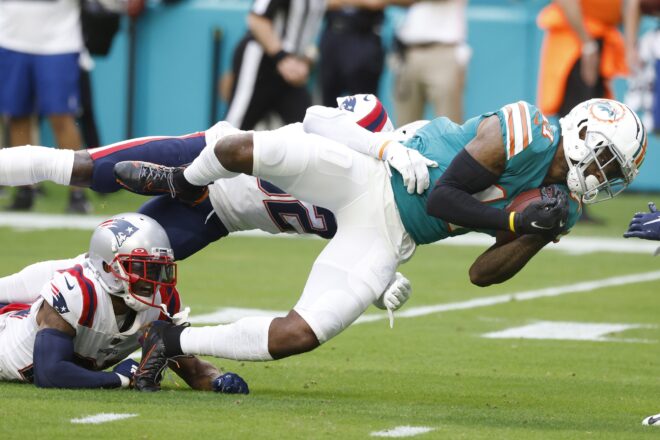 Good morning, here are your weekly Patriots news 04-24 and some NFL notes.

The 2022 NFL Draft begins on Thursday night and it should prove to be a very intriguing one this year. Several teams have multiple picks in the first round which could mean that there may be a lot of movement around the board.

With what is generally perceived to be a weak QB class, there isn’t (IMO) any 1st round QB worthy of going that early. However, as we’ve seen numerous times in the past, there will undoubtedly be some teams that reach for a QB too soon.

For the Patriots there are several WRs, OL, DBs, and players on the front seven who can fill the holes they have on the roster. The big question is, will they trade back in Round 1? It takes two to tango but the opportunity should be there if they choose to slide back from #21.

Jakobi Meyers:  The Patriots WR is likely to remain with the Patriots in 2022. The signing window has passed for other teams for RFAs as of midnight on April 22 and Meyers, who was offered a 2nd round tender should return.

If another team offered Meyers a contract, the Patriots would have the opportunity to match the offer or get a 2nd round draft pick in return. Meyers is slated to earn $3.986 million dollars this season.

Jameson Williams: The Alabama wide receiver is recovering from a torn ACL that he suffered in the National Championship Game. But he is expected to recover fully and is a dynamic playmaker that will excel in the NFL. After transferring from Ohio State last year, Williams caught  79 passes for 1,572 yards and 15 touchdowns.

NFL Network and former NFL scout Daniel Jeremiah said that the buzz about Williams going to New England with the #21 pick would be a needed addition. “Obviously, Jameson Williams would be a home run pick. That would be somebody they would have great info on with Nick Saban’s connection to Bill Belichick. That to me would be a fun one.”

Devin Lloyd: Jeremiah also mentioned a pick if the Patriots used their #21 pick on defense and addressed the front seven. And he thinks that Devin Lloyd could end up being the team’s target if he’s still available.

“If you want to talk about a real playmaker on defense, I know linebacker, off-the-ball linebacker, has been a little bit undervalued recently,” Jeremiah said. “But, man, Devin Lloyd, for all the different things he can do, he kind of just feels like a Patriot type player with the size, the length, the versatility, the intelligence, the leadership. All that stuff kind of screams Patriot to me.”

DeVante Parker: Parker made his first appearance with the media in Foxboro after being traded from Miami and he said that his wish was to be traded to the Patriots after the Dolphins added Cedric Wilson and Tyreek Hill during the offseason and he no longer fit into their plans.

“I chose to get traded here,” Parker said. “My agent hit me up, just telling me what the situation was, and the options I had for the teams to go to. The first on my list was the Patriots.  I’m just excited we were able to get everything done.”

Parker also spoke about his first impressions of Mac Jones after the QB and several receivers got together for workouts in Florida. “He has a nice arm on him. He was zipping it,” Parker said. “It was a great workout for all of us. It was good for me to come down and start throwing with him early, get the timing down.

“Mac is a good quarterback, he added. “The way he throws the ball, it’s not tough. He throws a catchable ball. It’s something I’m looking forward to during the season.”

Patriots 4th & 2 Podcast: If you haven’t checked out our PatsFans.com podcast, “Patriots 4th & 2” in a bit, please check it out. Derek Havens and I posted a video of some QB, RB, and TE prospects available and went over Derek’s mock draft which was a very good one.

This year, the finalists are Vince Wilfork, Mike Vrabel, and Logan Mankins. The fans get the vote and my money is on Big Vince.

When Deebo Samuel demanded a trade from the San Francisco 49ers, immediately both fans and media began to drool over the possibilities of having Samuel in the Patriots’ offense. He was considered a legitimate Patriots draft target in 2019 but they opted instead for N’Keal Harry.

Then the Giants are putting up last year’s 1st round pick, WR Kadarius Toney for a trade. While his season was cut short by injuries, he showed in glimpses how dynamic he can be with the ball in his hands. Then the talk of Samuel died down as people began doing the mental gymnastics with Toney in the New England offense.

But what are the real possibilities of either coming to the Patriots?

No one knows what the issue is in San Francisco, but reportedly Samuel told the Niners to not make him an offer, that he wants to be traded. The Jets, Lions, and Packers are all reportedly interested in trading for him. But what about New England?

Paying Deebo Samuel is easy. I used the cap savings from converting most of Matt Judon’s 2022 salary into a signing bonus to create the deal shown in the screenshot. Believe this would give in the first 3 years of the deal the most new money for a wideout. https://t.co/BCXg7TLn5B pic.twitter.com/cAGOcZCmWi

Being able to pay that amount and willing to are two different matters. With Samuel looking to get paid in the Tyreek Hill realm of money, would the Patriots be willing to pay Samuel that kind of money? I tend to think not.

What would be difficult for the Patriots to do, however, is to put together a trade package that would be acceptable to the Niners. And frankly, the Patriots don’t have that kind of draft capital to compete with some of the other teams, especially with the holes that they have elsewhere on the roster.

Toney’s situation is different. By signaling that they are willing to move on from a 1st round pick from just a year ago, the Giants aren’t going to get the compensation that the Niners will expect to get for Samuel.

Toney’s reported refusal to show up for voluntary team activities shows a lack of commitment for a 2nd-year player.  And that wasn’t all. According to the NY Daily News, which broke the story, Toney had issues learning the playbook and also had poor meeting behavior. He has a new coach (Brian Daboll) that didn’t pick him. That’s a red flag. Of course, if the Patriots are indeed interested in Toney, then having his former head coach from last year (Joe Judge) in the building would answer any of those.

Trading for Toney would be a risk as his self-discipline appears to be lacking. But would a 3rd round pick be worth the risk? I’d say yes, but I’m not Belichick. Toney is a dynamic player with the ball in his hands. But he’d have to put the time in learning the Patriots’ playbook, which is notoriously hard for some players to pick up

“Just like some of the great players in the past, whether it be Tedy Bruschi or Logan Mankins, and go right down the line — Willie McGinest and Vince Wilfork. Jerod Mayo. Troy Brown. We all know it’s not going to last forever. Other leaders need to develop. These guys all stepped in for somebody before them. And somebody will step in for them in the future. It’s the NFL. …

“I think Mac will step into those roles eventually. Start with that.”

Very doubtful Belichick would have interest in Toney. Immature Prima Donna’s need not apply. Just the fact the Giants want to part with last years 1st round pick tells you all you need to know.