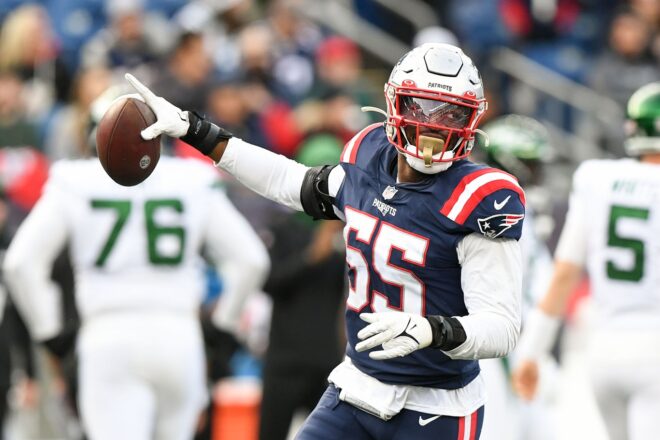 New England Patriots linebacker Josh Uche is spending time this offseason getting ready for the 2022 campaign, but behind the scenes, he’s been busy in the community trying to make a difference.

In a recent video interview, which Uche did last Friday, the New England Patriots veteran sat down with the folks at FinishLine in their “Community Voices” series and talked about the things that motivate him and the causes that are important to him.

Here’s the full transcript of the interview.

Talk to me about your path and journey leading to you becoming the LB with the Patriots?

I started off young.  Watching the Miami Hurricanes, watching Sean Taylor, Ed Reed, growing up.  Jumped into flag football, played running back, and stuff like that.  Pop Warner came, played defensive end, nose guard, actually.  And then I got so used to playing defense, playing defensive line, that I got to high school and they were like, ‘all right, you’re not big enough to play nose guard, we’re going to put you on the end.  So defensive end came, pass-rushing came.  Then I went to Michigan, started doing both, off-ball linebacker a little bit, and then … yeah, now I’m here.

I’d say it’s just finding your routine. You don’t have school anymore, you don’t have your parents telling you what to do anymore or like, or what you got next?  You’re a grown-up and you’ve just got to find a routine that allows you to be a professional.  You know, taking care of your body, getting the right amount of sleep, and then also financially, living within your means.  You don’t have to keep up with everybody else, you’ve just got to, you know, gain and maintain.

Yeah, you end up broke real quick trying to keep up with …

Exactly.  Trying to keep up with all the trends.  You’ve just got to stay in your lane and do your thing.

Like you said, live within your means, you know?

So what made you want to start the conversation around mental health, especially within the NFL and just people like us, minority groups?

I’d say it all started pretty much when I was younger.  My dad would always emphasize what my last name meant, which is Nigerian.  My parents are immigrants from Nigeria.  The name “Uche” actually translates to the word “Mind” in English over from Igbo, my native language.  So he always told us that growing up.

Then, I got to college in 2017, I had an injury that kept me out the whole camp.  You know, I was depressed.  It was a very hard time in my life.  Those close to me know how difficult it was for me.  Within that time, I started kind of reflecting and thinking like, man, athletes shouldn’t be going through this type of stress, or depression if you will.

So from there, I kind of just started building and thinking of different ways to support athletes or different ways I could hopefully give back once I made it to the league.  Because I feel like it’s a conversation that’s not talked about enough, especially within the profession and also within minorities.  Just growing up as a Black man, your feelings aren’t something you really talk about.  You’re kind of told to be a man and toughen up.  So I just started getting the ball rolling on that.

Talk to me more about your own personal journey with mental health. I know you mentioned the injury and getting depressed about that, what were some support systems for you to get you through those times?

My faith.  The faith my parents instilled in me growing up.  Just knowing always going to church and just relying on the valuable. Just knowing throughout any hard times I was going through, I had a purpose and a meaning, and that kind of kept me on track.  Just talking to my family and my friends and just keeping the people close to me that really believe in me and, you know, motivate me.

That goes a long way when you have that kind of support system.

Yeah, most definitely.  I’m learning this offseason, I’m learning right now, family is everything, that bond.  Family, including friends as well.  The stronger that is, the farther you’ll go.

So tell me about your foundation and how it came to fruition?

It started, like I said, in 2017 when I was injured.  I was actually in my room in a cast and I just started typing away on my notes on my iPhone and the title was, “Uche Foundation” and I just started piecing together things I would want to do if I got lucky enough to make it.  And by God’s grace, I made it.  So everything I kind of wrote down there back then when I was going through those tough times, I’m kind of starting to do now.  Whether it’s giving it back to kids, having football camps, different things just to kind of give kids a different avenue to know, there’s much more to their situation than what they think.  Good things happen, whether it be random or whatever.  Good things happen.

What kind of work have you been doing now with the foundation?  The kind of people you’re helping, etc?

It’s primarily geared towards minorities and underprivileged kids.  My first year in the league, we did a Target giveaway at my former church that my mom used to go to.  Thanksgivings, when we didn’t have food or whatever, she would go to the pantry and they would give back.  So I felt like it was only right for me to give back to families … during COVID, giving out masks and things like that.

Last year, I did something with The Boys and Girls Clubs of Providence, where we took kids on a shopping spree to Dick’s Sporting Goods, gave them athletic gear and things like that they might need.  So things like that and I’ve got a football camp coming up so I’m just trying to get the ball rolling on this stuff.

Only the beginning, yeah.

That’s the purpose of having Community Voices and elevating voices like yours to really speak on the things you’re passionate about, especially mental health and just serving the community that you come from.  On behalf of myself and Finish Line, I want to thank you for your time and your efforts in supporting the community.  We’re going to make a donation to your foundation to help you continue doing the work you’ve been doing.  So kudos to you, man.

Amen to that.  Thank you again, Josh

Appreciate you, man.  Thank you for having me.

It was a terrific interview, and you can watch the entire segment below:

The channel also features quite a bit of other interviews from some notable names, which can be found on their Instagram channel @FinishLine