10 months ago at 11:16 am ET
Follow @IanLogue
Posted Under: Patriots News

Some thoughts on this Tuesday:

1) After ESPN NFL Draft analyst Todd McShay recently said that he’s a big fan of Georgia’s Nakobe Dean and believes that he may be a great fit in New England’s defense during his most recent mock draft, it was interesting to look further into a player who certainly fits the mold of what they tend to look for in a player.

Dean, who didn’t work out during the Combine in Indianapolis, has impressed most NFL coaches by not only his body of work on the field but by his mental acumen off of it.

The middle linebacker from Georgia is a mechanical engineering major and holds a 3.5 GPA, with one coach telling The Athletic that Dean is “everyone you’re looking for mentally in a linebacker.”

“You can tell he’s really been well-coached,” said the coach, “but you can also tell he’s just a super bright kid, and it really translates on the field for him. He understands things— he gets it, and he plays super fast.”

Dean didn’t have the best performance during his Pro Day, which Bill Belichick was on hand for last month as part of the record 122 NFL personnel who were on the sideline taking it in.  He reportedly struggled after battling through a pectoral injury he suffered during his training that left him sidelined for a period leading up to the workout.

He was reportedly rusty but did show moments of quickness that may help his cause when teams make their decisions later this month.

At 5-foot-11, 229 pounds, he’s not the biggest player physically but he’s incredibly quick and athletic, which are two key attributes that Belichick is likely looking for given the shift going on not only in the AFC, but also within his own Division.

Given the importance that Belichick puts on that position from a mental standpoint, Dean also checks off that key box as well and it could see him on New England’s radar should they decide to go that way if he’s still on the board.

That seems to be the big question at this point, as it’s tough to say if he’ll be there when the Patriots make their selection.  He has come up as the pick on other mock drafts, with the Sporting News’ Vinnie Iyer selecting him in his recent Mock back on March 25th.

One interesting bit of information on Dean is the fact that the reason he picked mechanical engineering as a major is because he was interested in prosthetics and “how they work and the design of them” because he’d like to get into designing them at some point when he’s done with the game.

For now, the big question is simply where he might be headed in the coming months but if it ends up being New England, it seems like he’d certainly be a fun player to watch.

2) It sounds like the Patriots won’t be playing internationally this year, with Mike Reiss pointing out during his Sunday notes column that New England’s next trip overseas may come instead in 2023.

Reiss reached that conclusion primarily based on the fact that aside from their AFC East opponents, two of their 2022 road opponents include both the Arizona Cardinals and Green Bay Packers, who are already set to play in both Mexico City (Cardinals) and Mexico City (Packers).

That means each of those two games will be played stateside, which would likely eliminate an international trip for at least this season.

He believes that a trip to Germany in 2023 is the most likely scenario, which would make sense given that the NFL “awarded” Germany as an International Home Marketing Area as of January 1st of this year as part of the NFL’s marketing initiative for at least the next five years.

According to the earlier release, the club engaged Boston-based Globalization Partners, a leading global employment platform, to recruit and hire staff to be headquartered in Germany.

New England’s last international game came back in 2017 when the club took a trip to Mexico City and blew out the Raiders 33-8.  That game followed a trip out to Denver, which saw the Patriots stay in Colorado leading up to the contest to prepare for the altitude difference at Estadio Azteca, which sits at 7,200 feet above sea level, higher than the 5,280 feet of Empower Field at Mile High in Denver.

It paid off.  Former Patriots QB, Tom Brady, matched his 2003 performance against Indianapolis by opening the game hitting his first 12 passes, putting the Patriots up 17-0 at the half.  He missed just four passes over that span while throwing two touchdowns, including a 64-yard bomb to Brandin Cooks.

3) The NFL is apparently quietly trying to grow football in other ways, with the latest push focusing on potentially bringing it to the world stage.

According to Front Office Sports, the NFL is getting behind flag football and is making a push toward potentially adding the sport to the 2028 Olympic Games.

The league is reportedly looking to grow its international business to $1 billion annually over the next 10-years, with the hopes of using flag football as an avenue to do so.

Since the NFL game in its current form isn’t really suited for the Olympics given the recovery time needed for the players, the game of flag football seems to be the most logical solution.

However, in order for that to happen, the league would also have to make a push internationally for more people in other countries to start playing to create the competition needed for it to become a viable idea.  At the same time, countries outside the U.S. likely wouldn’t want to invest in the sport without it being part of the games.

But it looks like the idea could be gaining steam, although a decision reportedly isn’t expected until after the next Olympic games, which are scheduled for 2024. 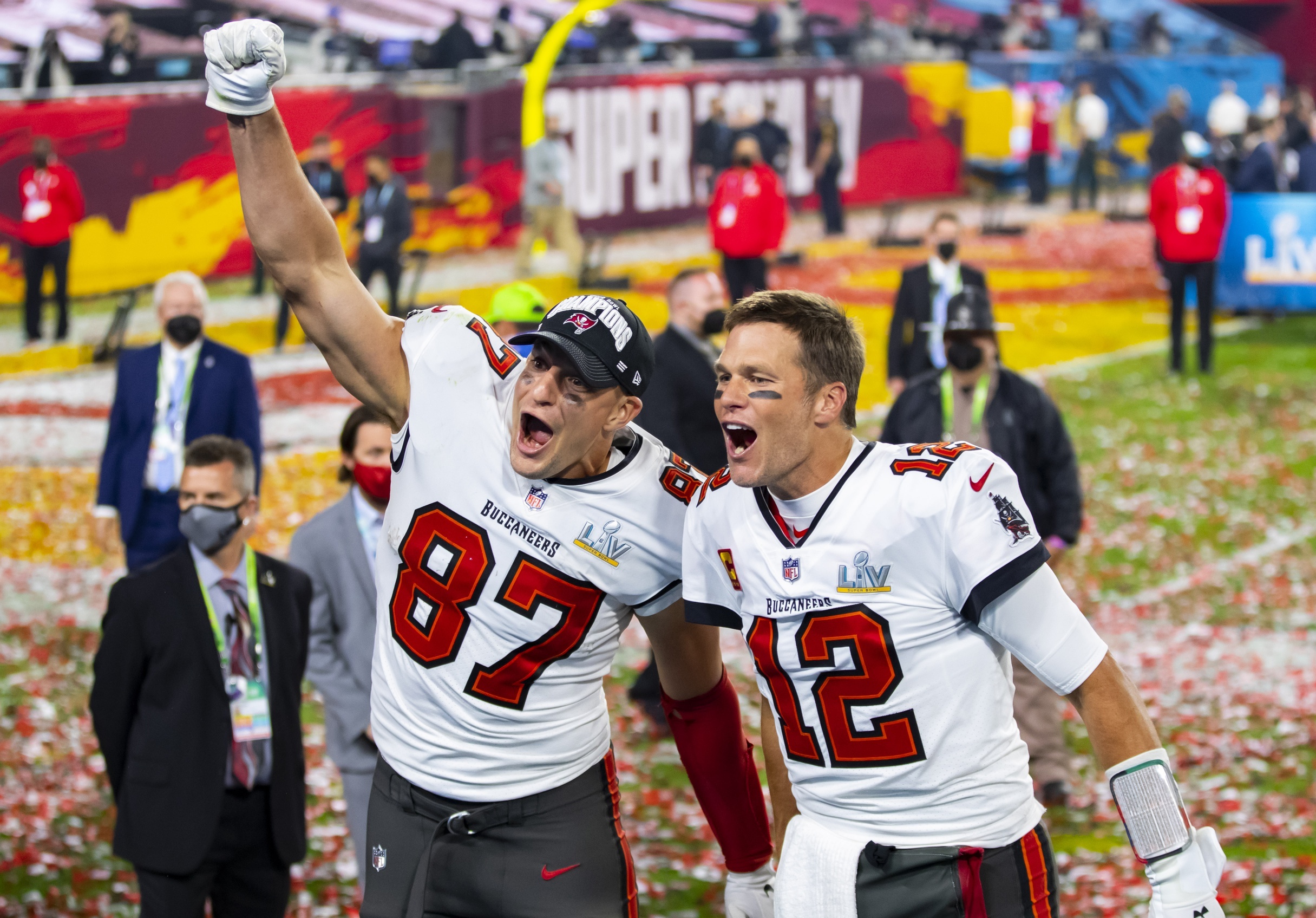 4) While Brady may have had a change of heart and wanted to get back on the football field for at least one more season, it sounds like he could be without one of his best offensive weapons in 2022.

So far, former Patriots tight end Rob Gronkowski remains sidelined and it sounds like he’s not in any hurry to get back onto the field.

Gronkowski was recently asked about his future and he admitted that he’s not ready to commit to playing in 2022 just yet.

Given the injuries he’s faced over the years, Gronkowski has dealt with the physical toll of football and it played a role in his decision a few years ago to sit out and get his body back to a place where he felt comfortable.

After getting back out there, despite winning a championship with the Buccaneers, the veteran tight end took some pretty good shots over that span, including last season where he appeared pretty banged up down the stretch.

That may be what’s on his mind at this point as he ponders his future.  The 32-year old admitted that when it comes to playing the game, it requires a level of commitment he’s just not willing to make yet and he won’t sign a contract again until he feels like he’s ready to go.

“Even in your 30s, I mean, you just can’t just slack it and just be 50% all in then you’re going to get caught off with the game and it’s going to just spit you right out,” Gronkowski said. “You’ve got to be fully dedicated. I’m not ready to do that yet, I’m not going to sign a contract if I’m not fully ready.”

5) As if things couldn’t be going bad enough in Washington for Commanders owner Daniel Snyder, there’s a big accusation circulating that if true, could potentially put him in even more hot water.

According to an article from Front Office Sports, the House Oversight Committee reportedly received information that the club kept ticket revenue that is supposed to be shared with other NFL teams.

The NFL bylaws state that all teams are required to pass along 40% of the net ticket sales from each home game to the league, which then gets dispersed to visiting teams.  A source alleges to investigators that the club didn’t pass along the full percentage, which now has the league involved to investigate the matter further.

While clubs aren’t required to share additional revenues like parking or local sponsorship deals, the requirements as it pertains to tickets are pretty explicit.  According to the FOS report, Washington reported the second-lowest attendance last season.

The Commanders issued a statement Monday denying the accusations.

“There has been absolutely no withholding of ticket revenue at any time by the Commanders,” the Commanders said in a statement on Monday. “Those revenues are subject to independent audits by multiple parties. Anyone who offered testimony suggesting a withholding of revenue has committed perjury, plain and simple.”

So we’ll see what the league finds out after they finish their investigation.  If it ends up being true, it could be the end of the line for Snyder, who appears to be on his way to having his time as an owner finish with yet another scandal to add to his already tarnished legacy.