10 months ago at 6:50 am ET
Follow @SteveB7SFG
Posted Under: Patriots News 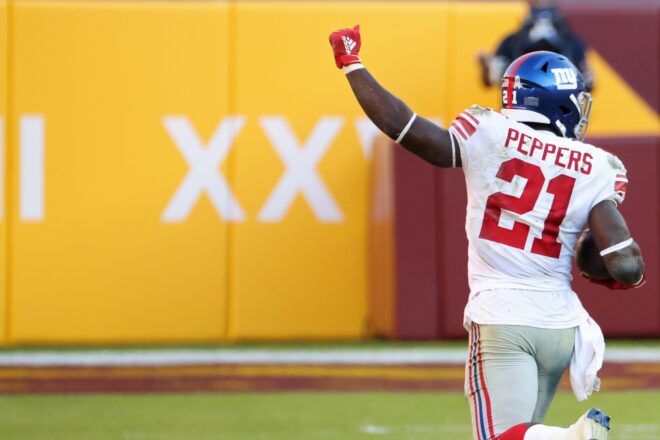 The Patriots have signed former Giants safety Jabrill Peppers to a one-year contract. The contract is worth up to $5 million dollars including incentives.

At first glance, the Patriots’ signing of Peppers seemed like an unnecessary one. Safety was one of the deeper positions on the team as the Patriots have Devin McCourty, Adrian Phillips, Kyle Dugger, Justin Bethel, and Cody Davis (mainly special teams). Last year they drafted Joshuah Bledsoe who was injured, knowing he wouldn’t contribute in 2021.

But Peppers is a Swiss Army Knife who could find himself in a multitude of roles on both the defense and on special teams. His signing opens up an intriguing set of options for the Patriots coaching staff.

Peppers was reportedly on many draft analysts’ radar for the Patriots during the 2017 NFL Draft coming out of Michigan as he was considered a perfect fit for Bill Belichick and the defense. Peppers brings that athletic upside to the defense that was needed after 2021 and could significantly play snaps all over the field.

During the 2017 NFL Combine, Peppers ran a 4.46 in the 40-yard Dash as well as a 6.99 in the 3-Cone Drill, something the Patriots put great stock in. The Giants’ defensive coordinator Patrick Graham, a former member of Belichick’s staff used Peppers in much the same way, we expect Belichick to use him as well.

Prior to his ACL injury, Peppers played in just 229 defensive snaps but they played out much the same:

Of course, the caveat to all of this is whether Peppers will be the same player once his ACL heals. Early reports state that he’ll be ready to go by training camp. And if that is the case, then it opens up some intriguing options.

One thing to keep in mind is that we’re still on in March, and the team building is still in its infancy. So there are still plenty of moves to come both in free agency and the upcoming NFL Draft that will take place at the end of April.

But at first glance, Peppers could easily be seen as being the Patriots’ punt returner since they declined to offer Gunner Olszewski a contract this spring and who subsequently signed with the Steelers.

Belichick loves players who are versatile and signing one as athletic as Peppers naturally got the creative juices flowing trying to figure out how they plan on not only using Peppers but their other safeties.

With a lack of depth at cornerback, on the surface, we could see a lot of three and perhaps even four safety looks from the defense, as the team will try to go lighter and faster. Jonathan Jones hinted at a “positionless” defense earlier this month, which means that they may decide to play a multitude of defensive backs in an interchangeable defense.

It would be a classic Belichick move to play a safety-heavy defense with the price of cornerbacks getting out of control. I’m sure sports talk radio (that are trying to the ridiculous notion that he’s on the hot seat) will hate it.  We’ll see how it all plays out, as we said, it is still very early.

Playing out of the slot, Peppers has been effective in covering tight ends and smaller wide receivers as well as blitzing off the edge. Peppers will fit into that hybrid safety/linebacker role that both Phillips and Dugger have played effectively. It is another under-the-radar signing that won’t excite many in the fan base but may very well pay nice dividends once the season starts.

We’ll be watching to see how well Peppers can run once the players hit the field this summer.