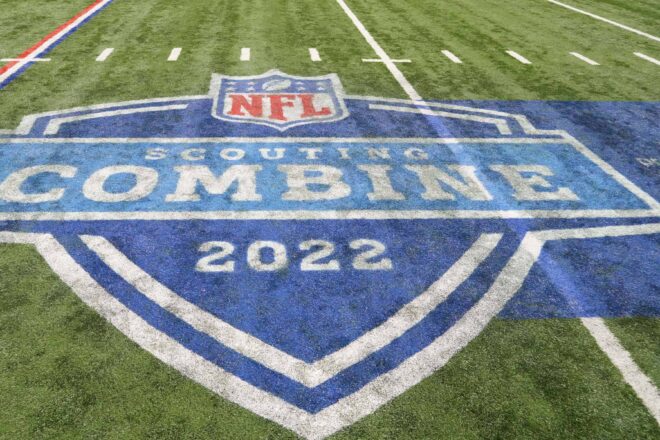 Jordan Davis DT Georgia – Everyone knows Jordan Davis.  How can you not notice him, he is 6’6” 351 lbs.  NFL Network opens the coverage by showing the glamour event, the 40-yard dash.  Davis is the 4th player to run the 40 and he blows the roof off Lucas oil stadium.  The Big Man ran a 4.82 timed by NFL Network.  Twitter blew up over that performance.  The official time came back even faster at 4.78.  Most analysts questioned whether Davis could be an every-down player.  He answered that question.

Troy Andersen LB Montana St – 6’3” 243 lbs ran a 4.42 40, 36” Vert and 10’ 8” Broad Jump.  He looked good in the field drills, especially those that mimic covering backs and TEs.   He only has 2 years playing LB.  In his 1st two years at Montana St, he was a QB and in one year ran for 1400 yards and 21 TDs and 1st team All-Conference.  SB Nations Keegan Steifel said that Andersen was the Patriots’ gain because he has that positional versatility Bill Belichick covets.

Leo Chenal LB Wisconsin – Chenal checked in at 6’3” 250 lbs and was able to run a running back like 4.53.  He made himself some money on Saturday.  Both Andersen and Chenal were players I highlighted that needed a big combine.  Both delivered in a big way.

Devin Lloyd LB Utah – Ran a 4.77 unofficial 40 reduced to 4.66 official.  That’s not bad but not what was expected.  Lloyd is a little smaller than Patriots Kyle Dugger!  Lloyd’s fieldwork was shoddy as well.   He has great production at Utah and game tapes.  he will not drop past the 2nd round.

Myjai Sanders Edge Cincinnati – Dropped 30 lbs for the Combine.  At 228 lbs he is no longer an Edge player but an outside linebacker with no experience playing that position.  He did run a 4.67 40.  At that weight, he couldn’t possibly hold the edge.

Jo Jo Dormann  LB Nebraska – He is not a linebacker but a big safety.  He looked lost doing the field drills.

A follow-up to the issue brought up about the 40 timing.  The combine used a new starter on the laser clock this year, which was the reason given for the wider discrepancies between the official and unofficial times. It is yet to be seen if this issue will be fixed for the remaining three days of testing.

By: Mark Morse
Both games are in the books and we have learned about several players we have not seen play.  The practices leading up to the games…
13 hours ago