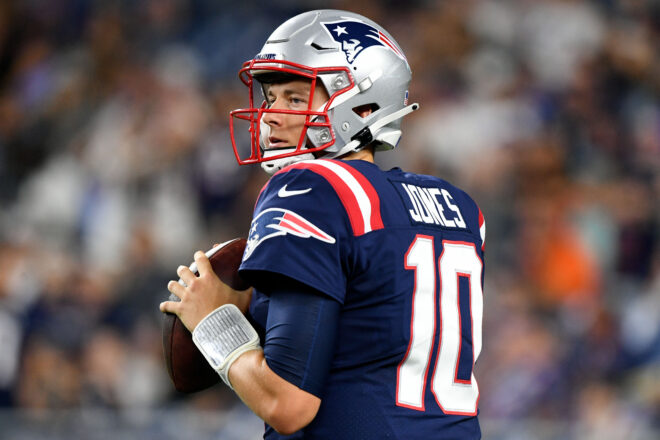 Anyone who’s ever played with, or closely followed, the glittering career that Tom Brady had in the NFL will tell you that a key element of the success that the seven-time Super Bowl winner achieved was down to sheer hard work and an unstoppable desire to up his game and it appears, according to some reports, that the man who has been brought in to replace the legendary quarterback, may not be following in his footsteps in that department.

Mac Jones had a solid rookie season for the New England Patriots last season, and certainly outshone Cam Newton’s run in the team the previous campaign, and the 23-year-old has obvious talent, talents that coach Bill Belichick will look to utilize as he seeks to take his team back to the top.

Backing the Patriots to once again secure a Super Bowl triumph isn’t a bet you should take lightly; like an IPL match prediction, it’s something you have to mull over. Brady was such a key aspect to the Patriots’ era of success that any hopes of replicating it requires a quarterback who is capable of leading the team from the front.

Some have questioned Jones and his ability to be the difference at the Gillette Stadium at such a young age. While it’s true Brady was capable of doing so at an early point of his career; it’s not generally the case when it comes to rookie performers.

As it turns out, Belichick doesn’t have an issue with Mac Jones when it comes to his ability to knuckle down and work hard, commenting early on this very point earlier in the season;

“Mac has come in here and worked hard,”

“He’s put in a ton of work every day. I think that has paid off, and it’s showed up in the things he’s been able to improve on.”

“If he makes a mistake, he learns from it and works hard at it. He works hard in the first place, so he doesn’t make mistakes. Maybe he gets it right the first time, which is sometimes hard at that position. His work ethic is very good.”

Jones himself is keyed into building from his successful rookie season and maturing into a consistent performer;

“I want to be back close to home in New England in the offseason because we obviously have our place there,”

“Just figuring out ways to be a better quarterback and then do whatever we can to put more points up on the board so we can win more games.”

It seems one aspect Jones will look to rein in relates to his weight and fitness, another area he hopes to rectify in Tom Brady-style;

“Just limit it and then try and eat healthy, like we do at the Patriots, every day that give us great food. I just got to talk to Ted (Harper), our nutritionist, and make sure we’re on the same page.”