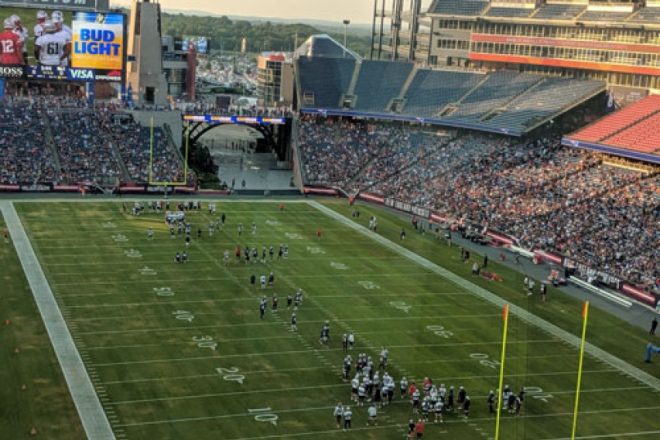 Now that the East-West Shrine Game and the Senior Bowl are in the books, it’s time for my February Mock Draft.  I have used poster Bacon Grundle Candy’s New England Patriots Draft Board as our source for players to select.  You can also find BDC’s spreadsheet in the Patriots Draft section of the Fan Forum

BGC has ranked players who he thinks are “Patriots: type players by which round he values these players.  For this Mock Draft, I will use Pro Football Focus Mock Draft Simulator.  I find PFF to be the most realistic in the player rankings.

I kick things off with a big trade.  Sitting at 21, Cincinnati is interested in the pick.  Trent McDuffie one of two BGC CBs that are worthy of being selected in the first round, is available.  He is the #15 overall ranked player on PFFs board.

1-31 Trent McDuffie CB Washington – 5’ 11”, 195, 4.45 speed, 41.5 Vert, 10.9 Broad Jump, PFF Ranking #15, BGC Ranking 1st Rd.  I expect he will post these numbers at the Combine next month.  He is very aggressive, which sometimes gets him in trouble.  Tackles like a Safety and plays well in both Man and Zone coverage.  All PAC 10 1st team last year.  3Rd Team All-American.  Has trouble with bigger receivers and that may be the reason he slides down the 1st round.

2-53 Devonte Wyatt DT Georgia – 6’3” 325, PFF Ranking #37,  BGC Ranking 2nd Rd.  Wyatt was unstoppable all week at the Senior Bowl, embarrassing the O-Lineman trying to block him.  He played on that great Georgia Defense and he may be the best player you don’t know because the other players were so good.  In the end, Wyatt may be the best player of the whole bunch of Bulldogs.

2-63 Travis Jones DT UConn – 6’4”, 333 lbs, PFF Ranking #68, BGC Ranking 2nd Rd.  Relative unknown player because he played at UConn.  I guarantee you that UConn opposition knew all about him.  He was another DT that showed up at the Senior Bowl and dominated.  Combine these two rookies and 2nd-year player Christian Barmore, the Patriots will have one if not the best young Defensive line in the league.

4-123 Skyy Moore WR Western Michigan –   5’10”, 195, 4.45-speed PFF Ranking #43, BGC Ranking 5th Rd.  This is the only player that I went against the ranking of BGC.   I have been singing the praises of Moore since the start of the draft season and he is my favorite player in the draft for the Patriots.  They need speed in the slot.  I am very curious about how Moore will run, test, and catch during the Combine next month.  If he tests well (Onsite had him at 4.3 40) he could explode up the draft board to the mid 2nd round level that PFF projects.  If that is the case then he will be out of the Patriots range.  The Patriots have too many priorities on Defense that must be addressed before they take WR.  Moore runs great routes, is terrific after the catch, and is an extremely reliable receiver.  Last year he was targeted 123 times and caught 94 passes.   He only dropped 4 catchable balls. Last season he had 1291 yards and 10 TDs.   Moore is also a Punt Returner and considering that Gunner Olszewski has regressed as a receiver, Moore could easily replace him on the roster.

4- 133 Josh Paschal Edge Kentucky – 6’2” 278, 4.82 speed, PFF Ranking #78, BGC Ranking 3rd Rd.  2nd Team all-SEC with 15.5 Tackles for loss, 5.5 sacks, 8 QB hurries.  He was the only three-time Captain in Kentucky history.  The Patriots give extra points in their evaluation if the player has been selected a captain.  They want leaders who will step up and fill the void when the veteran leadership retires or moves on.  Paschal was another that received good grades at the Senior Bowl.

6-219 Micah McFadden LB Indiana – 6’ 1” 232lbs, 4.67 speed, Two-time captain at IU.  Two-time 1st Team All-Big Ten.  77 tackles, 49 solo, 15.5 TFL, 6.5 sacks.  Downhill defender and thunderous tackler.  His neck girth matches that of former Patriot LB Ted Johnson.  McFadden will immediately contribute on all Special Teams with the possibility of eventually working his way into the lineup.  He could replace Brandon King immediately in the lineup.   Not sure the Patriots are getting this pick.  Through a series of complicated conditional trades, most sites do not have the Patriots getting this selection.

Patriots Offensive Coaches Exodus –   This is not a good thing for a developing QB like Mac Jones.  The Patriots have lost OC Josh McDaniel and he has taken OL coach Carmen Bricillo, Asst QB Coach Bo Hardegree and WR Coach Mick Lombardi with him to Las Vegas.  I was surprised that Lombardi left to take the OC position in Las Vegas because I thought he would be a candidate for the OC position here.  Obviously, he didn’t get any indication of that from Bill Belichick and took the promotion in Las Vegas.  Carmen Bricillo was also a bit of a surprise, since this is a lateral move, the Patriots could have blocked it.  Bricillo’s contract may have run out and he would be free to pursue other opportunities.  The other strong rumor is that long-time running back coach Ivan Fears is retiring.  That’s 5 offensive coaches.  Troy Brown should easily move into the WR coach position and Nick Caley is the TE coach.  It appears that Belichick is not going to name an OC, and it will be coach by committee, with Joe Judge assuming the QB coach role and defacto OC.  Even Matt Patricia has been rumored to be working the offense this year.  Assistant RB coach Sal Sunseri will likely move up to RB Coach and Offensive assistant Tyler Hughes will probably be promoted to one of the assistant offense positions.  Former Patriot OL Billy Yates will move up from Assistant O-line coach.

Super Bowl – I saw only 10 minutes of the game as I was sick all day Sunday.   What I did see was an obvious offensive pass interference on Tee Higgins when he grabbed and yanked down Jalen Ramsey for a TD.  I understand the officials inserted themselves into the game late by making a controversial call after missing an obvious early start by the Rams Offensive Tackle.

1.)  Convert Matt Judon’s salary into a bonus and spread it out for the length of the contract creating $6.64M in cap space for 2022.

Here is my guess at the 3 most likely ways the Patriots will create cap space this offseason.
1.) Convert most of Matt Judon's salary into a signing bonus creating $6.64M in cap space
2.) Extend Hunter Henry's deal creating $5M in cap space
3.) Extend Jake Bailey

Bailey is the 2nd highest-paid Punter in the league at $4,055,520.  I wouldn’t be surprised if the Patriots went after Penn St Punter Jordan Stout.  He impressed everyone at the Senior Bowl and had a kickoff that traveled 85 yards.  It’s around the time that Belichick changes his punters.

I will add a couple of other ways for the Patriots to reduce their cap hit.  Shaq Mason counts over $10M against the cap.  If the Bengals don’t want to get their prized 2nd year QB killed they need an RG.  Aaron Donald abused their RG.  Trade Mason for a 2nd round pick and move Owenu into his natural RG position.  Re-sign Brown before Cincinnati does (They have a boatload of cap space).

They could also trade Isaiah Wynn to Atlanta for Calvin Ridley.  Ridley is a risk with his mental health issues.  If healthy he is a dynamic player.  This would add $1.208 to the Patriot’s salary cap (difference between the two players’ salaries).  I liked Yodny Cajuste when he played LT for Wynn and could be a stop-gap until the Pats draft another LT.

Green Bay FA Pro-Bowl LB linked to Patriots – DeVondre Campbell was touted by Bleacher Report as a likely signing by the Patriots.  The speedy (4.53 40) 6’3” 232 lb Linebacker made the Pro Bowl this year for the 1st time after a career year.  He will be looking to cash in in Free Agency and his market rate is $6M per year for 3 years.  The main reason he is linked to the Patriots is his agent Drew Rosenhaus.  Many of the Free Agent signees by the Patriots last year were Rosenhaus clients.  He has a great relationship with Coach Belichick.