3 years ago at 7:35 am ET
Follow @IanLogue
Posted Under: Patriots News 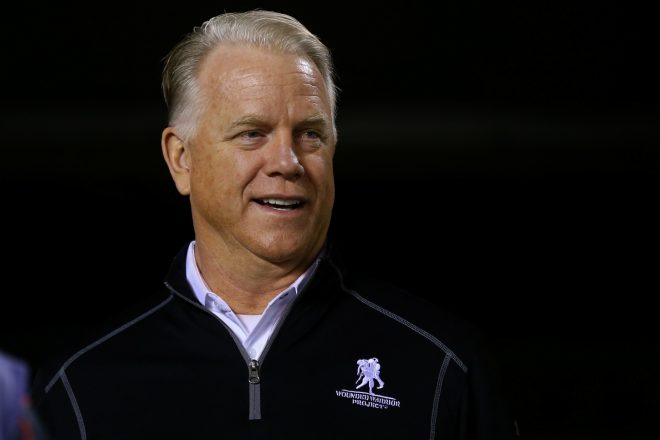 With the Patriots coming off of a productive week of practice and just a couple of sessions left before the countdown to training camp begins, here are some thoughts as we kick off this week.

1) One of the more frustrating topics of discussions last week was former NFL quarterback Boomer Esiason opting to publicly go after Tom Brady for Brady’s reported decision to pursue the trademark for “Tom Terrific”, which drew the ire of the retired quarterback.

Esiason, for the most part, has always had nothing but positive comments for Brady both on television and in his weekly interviews on WEEI. But Esiason went off the rails last week, attacking Brady after his strong feelings against the idea of trademarking that term apparently stemmed from the fact he credited his childhood hero, Mets pitcher Tom Seaver, as being the player who, in his mind, is the one worthy of that moniker since that’s how Mets fans referred to Seaver during his career.

Needless to say, the idea of Brady trademarking the nickname got Esiason all fired up, with the generally level-headed former player making some ridiculous comments to WFAN last week.

“When you’ve got so much goddamned money, you can do whatever you want, and this is now what Tom Brady wants to take — “Tom Terrific” as his nickname,” said Esiason via WFAN. “Maybe in New England they call him that, I guess. But you know what? We’ve been calling Tom Seaver “Tom Terrific” forever, for as long as I can remember, for 50 years. That’s who Tom Terrific has always been.”

“I am disgusted,” continued Esiason. “And I’m really surprised, and I’m really — I don’t know, it just feels sleazy to me, you know?”

While Esiason’s home market is now New York, it’s surprising that if he truly felt that way, it seems like it would have made more sense for him to at least do the right thing and reach out privately to Brady for more context, which would have been the smarter move. Instead, Esiason made assumptions and disparaged Brady publicly, which simply wasn’t the right move and was certainly disappointing.

Brady was asked about the situation this week, but explained that the decision was really over the fact he didn’t like the nickname, which he’s heard used when some have referred to him. Unfortunately, it got blown way out of proportion and he was disappointed with what it turned into.

“It’s unfortunate,” said Brady, referring to the overall backlash over the situation. “I was actually trying to do something because I didn’t like the nickname and I wanted to make sure no one used it because some people wanted to use it.”

“I was trying to keep people from using it and then it got spun around to something different than what it was. Good lesson learned and try to do things a little different in the future.”

Seems simple enough. Unfortunately, Esiason’s comments may have potentially damaged any relationship the two may have had for stupid reasons. Brady said it’s a lesson learned. Hopefully, Esiason learned one as well. 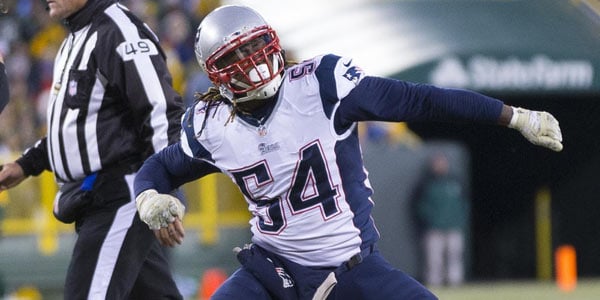 Hightower has been a clutch performer in the postseason.

2) One of the things that stood out from Thursday night’s presentation of the Super Bowl rings to the players were Bill Belichick’s comments about Dont’a Hightower, where Mike Reiss said that Belichick referred to the veteran as “Mr. February”, stemming from the big performances the linebacker always seems to come up with during each of the team’s Super Bowl victories.

So far this offseason, things seem to be going well for Hightower, who has dealt with his fair share of injuries during his career. However, it appears the work he’s doing is paying off as he’s been focused on getting his body healthy, having lost weight along with spending time working on his flexibility. According to Karen Guregian of the Boston Herald, that time has also been spent with offensive lineman Shaq Mason, with the two training in Tennessee as Hightower continues working toward trying to make sure he’s able to stay on the field in 2019.

One of Hightower’s strengths has been his ability to get after the quarterback, most notably, in the playoffs. He came up big against the Rams, finishing with two sacks and three total quarterback hits against Jared Goff during their most recent championship run. Whether or not he’ll see more of that type of role now that Trey Flowers is gone remains to be seen but Hightower said he’s ready to do whatever Belichick needs him to this season and he’s hopeful all this work will pay dividends.

“Whatever Bill wants me to do, wherever he wants me to play, that’s where I’ll be,” said Hightower, “but again, my body feels a lot better. My knees are a lot better. The yoga helps with my core, strengthens my quads, all my limbs have more flexibility. If all that ties together (with getting to the quarterback), I’m down for it. But I feel good. I just want to stay on top of it.” 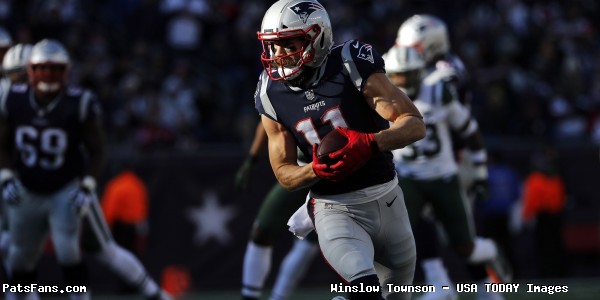 Edelman has come a long way as a player since being drafted in 2009. (USA TODAY Images)

3) The initial reports coming out of minicamp seem to point to good things for rookie receiver N’Keal Harry, which is certainly a positive. But one of the even more interesting aspects of this story is the involvement of Julian Edelman, who reportedly spent some time working with the rookie on the finer points of playing in New England’s offense.

According to Reiss, Edelman spent some time during the recent sessions talking to the rookie following a route he ran, which the next time around saw Harry do it a little differently and more precise, leading to praise from quarterback Tom Brady.

It’s amazing when you think back to where Edelman started to where he is now, having evolved into one of the best players at his position in a league where he’s generally not even mentioned among the top receivers in the NFL. The latter fact is the one that likely continues to motivate him and here he is, helping another up-and-coming player who will hopefully help him get another opportunity at a championship next February.

Reiss noted in his Sunday column that one of Edelman’s own mentors was former Patriot Fred Taylor, who spent a lot of time with him in his early years. The two would spend car rides together talking and developed a good relationship.

“I saw a lot of myself in him. Julian was so hard on himself, and when the coaches were hard on him, he would get down. Way down,” Taylor told Reiss. “Going to New England can be tough for rookies, with [Bill Belichick’s] coaching style, but I would say, ‘You don’t know how good you got it. You all have to appreciate this.’ Julian thought Coach was being a hardass, and tough on him. But that’s because he saw something in Julian. Some people don’t recognize that until it’s too late, but fortunately for Julian, he figured it out.”

Taylor’s comments sparked a reminder of Edelman’s attitude when it came to that sort of tough treatment, which stems from a mention in the book “Relentless”, authored by Edelman and NBC Sports Boston’s Tom Curran, which gave a really great glimpse into the receiver’s life. But one area that stood out was Edelman talking about the fact he preferred people being straight with him, especially if he wasn’t doing things correctly.

“You need to be called out and told the hard truths. You need to be shown the consequences of what will happen if you screw up,” explained Edleman. “You need people who won’t say, “Everything’s OK…” when it really isn’t. My father pointed out the bad more than the good. And Coach Belichick spends a lot more time telling us what we need to further improve on instead of patting us on the ass for something we’re supposed to be doing anyway. You have to have thick skin in this world.”

It’s a good mentality to have and it’s great to seeing him having a positive influence on someone like Harry, who they likely have high expectations for. It’s a little early to read too much into it, but let’s just hope Harry is filing away this information and will build on it by the time training camp begins. 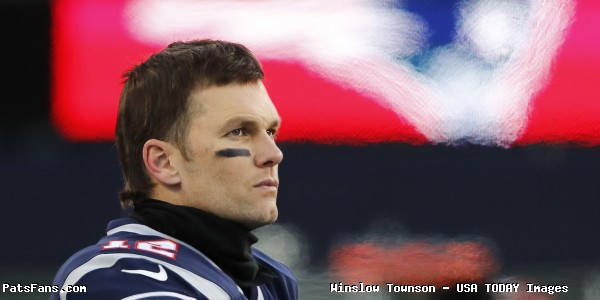 Brady once promised he’d take advantage of any opportunity prior to becoming a starter.

4) I stumbled upon an interesting article by Jaclyn Galvin and Sam Gordon over at PrimeTimeSportsTalk.com, with the two having caught up with former Patriots quarterback Michael Bishop.

For anyone who doesn’t recognize that name, Bishop was a former New England quarterback and a 7th round draft pick selected by then Patriots head coach Pete Carroll, who took the Kansas State standout with the 227th overall pick in 1999.

Belichick inherited Bishop when he took over in 2000 following Carroll’s firing after an 8-8 finish in 1999. Brady was selected in the 6th round that year during Belichick’s first NFL Draft as Patriots head coach, joining Bishop behind then-starter Drew Bledsoe.

The two apparently developed a good relationship, with Bishop saying that they each talked about how they expected the other to make the most of an opportunity if it ever came.

Off the field, the two apparently spent a lot of time together, talking about their goals and what they hoped to accomplish.

“From the time I was [in New England], me and Brady used to hangout. We used go to this place called ‘The Rack,’ and I got some stories I can’t tell you,” Bishop said. “But from actually being around Brady, at the time [Drew] Bledsoe was the starter and I finally got moved up to backup, me and Brady spent a lot time before practice and after practice, we shared a lot of stories and goals we both had.”

Bishop didn’t get to see Brady’s ascension first-hand. He was cut in training camp the following season in 2001, with Brady moving ahead of him on the depth chart behind Bledsoe, while free agent quarterback Damon Huard held the other spot.

Obviously the rest is history, but it’s interesting to learn that Bishop and Brady were as friendly as they were. Kudos to Galvin and Gordon for providing a nice walk down memory lane and the rest of the piece is definitely worth checking out, as it has some other terrific bits of information as well.