A finalist four times, Slater took home the prestigious award alongside $25,000 to donate to the charity of his choosing.

#Patriots captain Matthew Slater wins the Art Rooney Award for Sportsmanship! @Edelman11: "There are great teammates, then there's Matthew Slater. Nobody gives more of himself to the team, community and game itself than Matthew" pic.twitter.com/oBRZYQMVqu

“As a 10-time Pro Bowl selection and three-time Super Bowl Champion, Matthew is already recognized as the most accomplished special teams performer in NFL history,” said Patriots Chairman and CEO Robert Kraft in a statement. “He is an even better person. He is a man of tremendous faith whose character shines bright. His leadership, on and off the field, has earned him the respect and admiration of his coaches and teammates, who have voted him as their team captain for the past 11 years. In my opinion, there is no player more deserving of the Art Rooney Sportsmanship award than Matthew Slater. He is a tremendous ambassador for the New England Patriots and the National Football League.”

According to the NFL, the award, named in honor of the late founding owner of the Pittsburgh Steelers, Art Rooney Sr., is annually given to is given to the player “who best demonstrates the qualities of on-field sportsmanship, including fair play, respect for the game and opponents, and integrity in competition” and voted on by current players.

A 14-year veteran of the Patriots, Slater has been named a team-captain 11 times, earned ten Pro Bowl invitations on special teams, and has been a part of five Patriots Super Bowl trips and three championships. During his Patriots tenure, Slater has previously received the Ron Burton Community Service Award (2013) for his charitable work off the field and is currently the team’s United Way representative.

A well-deserved honor for one of the greatest all-around leaders in Patriots history, congratulations Matthew! 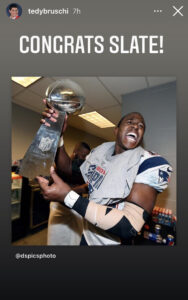 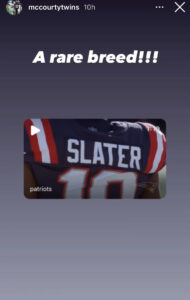 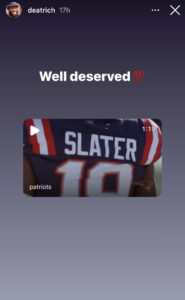