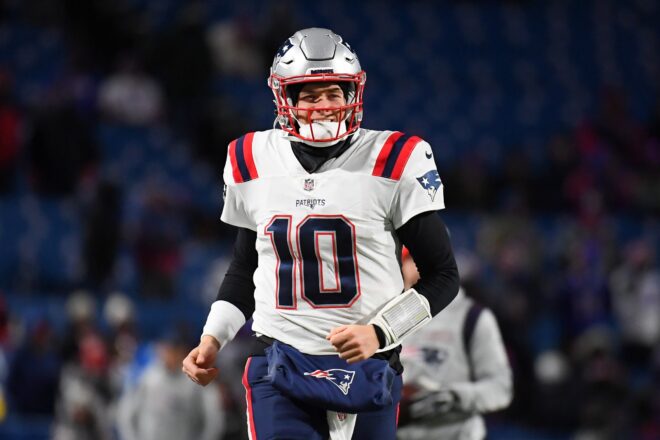 Some thoughts heading into Saturday night:

1) Heading into New England’s Wild Card playoff match-up against the Bills, one of the things that is obviously going to be at the forefront will be the performance of rookie QB Mac Jones, who will be looking to get his first NFL playoff win in what will likely be a pretty intense environment out in Buffalo.

Not that Jones is any stranger to that.  Having just played there a few weeks ago, Jones has already felt the ire of Bills fans for four quarters and was fairly unfazed.  Although he only threw a handful of passes that night in what was obviously a run-focused offense, it never felt like the moment was too big for him.  Despite all the noise, he had no issue with communication and he got the offense in and out of the various looks Buffalo’s defense was giving him and the result ended up being a hard-fought victory.

Having won a National Championship, he’s clearly no stranger to these types of contests and as we’ve seen, he keeps himself calm and does what he needs to.  That’s quietly been one of his best attributes and at the same time, his competitive nature is something that has endeared him with his teammates in the locker room.  When you have a player who not only plays well but has also built those types of relationships, it builds a lot of confidence heading into games like this one.

Weather is sure to be a factor again on Saturday but as we know, the Patriots execution on offense will ultimately be the difference.  Jones has already shown he knows how to get things done no matter the situation.  It should be fun to see how he handles it.

2) Unlike their second meeting, the Patriots head into this game with running backs Damien Harris and Rhamondre Stevenson both healthy this time around.  The two combined for over 200-yards out in Buffalo back in Week 13, but Stevenson missed the rematch after being out due to COVID-19 protocols.

With far more at stake in this showdown, both should be at full strength as Harris didn’t show any ill effects Sunday after having been nursing a hamstring injury.

With the two hopefully back together in the line-up in this one, it should make life a little easier for Jones, who spent some time under duress against the Bills a few weeks ago.  Jones is at his best when he can run play-action and keep opposing defenses off-balance and if the two running backs are able to have some success Saturday, it should allow Jones and the offense to make some plays and potentially allow them to pull off the upset.

Stevenson punished Buffalo’s defenders in the cold Buffalo weather the last time.  If all goes well, he’ll pick up where he left off in this one as well.

3) One of the biggest things to watch this weekend is going to be how the defense fares against Josh Allen, who made life incredibly difficult in the second meeting.

This has quietly been one of the biggest issues really all season, as they don’t seem to have a player on defense who does a good job of keeping a mobile quarterback in the pocket.  Over and over again we’ve seen QBs get outside and they don’t seem to have anyone who can close the gap and prevent big gains.  This used to be a strength, but it’s been one of their biggest weaknesses all season.

Obviously, the best way around that will be for Jones and the offense to get out in front and force the Bills into a situation where they have to throw, which will hopefully keep Allen back in the pocket.  Allen also did a good job in the previous match-up of keeping plays alive and making some big throws, finishing with over 300-yards and 3 touchdowns in their match-up at Gillette Stadium back on 12/26.

But Allen also rushed for 64-yards on 12 carries, many times coming in key situations where the defense was on the verge of getting a stop.  That definitely can’t happen this time around. 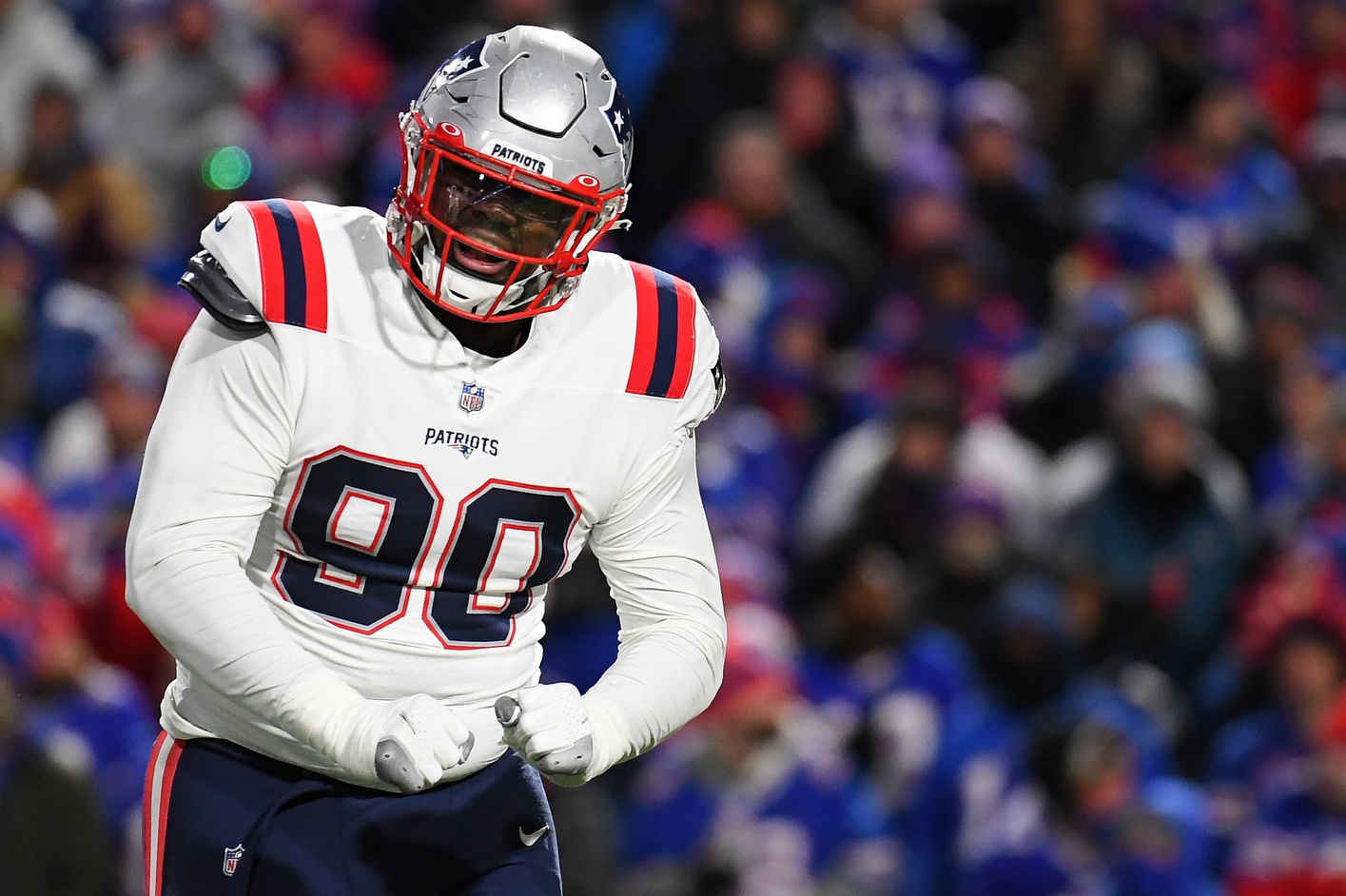 4) Speaking of defense, the fact Christian Barmore was out on the practice field on Wednesday, albeit he was listed as “limited” on the injury report, is incredibly good news, especially after seeing him carted off the field on Sunday.

The injury occurred toward the end of the game when defensive back Joejuan Williams collided with Barmore as the two were chasing down Dolphins QB Tua Tagovailoa on what happened on a key 3rd-and-8 where Tagovailoa picked up a first down.

Barmore was writhing in pain, which saw him eventually leave the field on a cart.  Seeing that was fairly devastating as any type of significant injury this late of the season could also have affected him heading into 2022.

Instead, reports on Monday indicated that he didn’t suffer any damage to his knee on the play, which was incredible to hear.  He’s been invaluable to the defense all season and against Buffalo, who has a tough ground game, his absence would have been tough to overcome.

Hopefully, he won’t suffer any setbacks but the former Alabama standout has joined Jones as another key addition to a team that will hopefully now be able to take care of business as the two rookies each get set for their first career playoff game.

5) As we’ve seen all season, kicker Nick Folk has been absolutely terrific and he’s played a significant role in helping New England get to 10 wins and earn a playoff berth.

He’ll be tested this weekend in what will likely be another defensive battle, where every single point will likely be critical as the Patriots try and knock out the Bills and advance to the Divisional Round.  But if Jones can get the offense deep into Bills territory, the odds of them getting points has been pretty solid.

Folk’s been ridiculously accurate all season.  He’s a perfect 31-of-31 from 20-49-yards, with his only misses coming from 50+ (and he’s 5-of-8 from that distance).  After being challenged by Quinn Nordin in the preseason, Folk was unphased and he essentially picked right up from where he left off from 2020.

While Jones will obviously be trying to put the ball in the end zone on Saturday, it’s good to know that if he’s not able to, he’s got someone like Folk to make sure they come away with points.  But it’s really hard not to appreciate how great Folk has been all year and hopefully, that will continue heading into the playoffs.

6) One of the biggest question marks is going to be what the team does differently on offense on Saturday compared to the previous match-ups.  Jonnu Smith falls into the category of someone to watch, as he wasn’t targeted at all in the previous meeting and the team didn’t use him on any rushing plays, with the only way to even tell that he played requiring a closer look at the stat sheet.

His role all season has been a little strange, especially considering the impact he made previously in Tennessee’s offense prior to signing in New England.  Smith finished the season with just 28 receptions for 294-yards and just one touchdown, and that was through 17 games.  He had caught 35 and 41 passes respectively in each of his final two season out in Tennessee, including 8 touchdowns in his last season with them.

Will we see more from him this weekend?  If ever there was a game to try and get him involved and stress a defense, this would certainly be the time to do it.

7) One other big question heading into the weekend is whether or not Kristian Wilkerson will get elevated over N’Keal Harry, which didn’t happen last weekend down in Miami.

Wilkerson had a strong performance in his lone game of the season against the Jaguars, hauling in 4 passes for 42-yards which included 2 touchdowns.  However, he reverted back to the practice squad after the game and didn’t play in Sunday’s finale against the Dolphins as Nelson Agholor returned to the line-up after having sat out while recovering from a concussion.

Instead, Harry, who was a healthy scratch against Jacksonville, got the nod and was targeted just once for an incompletion on a route where there seemed to be very little effort.

One question on Wilkerson could be his blocking ability in the run game, which may have been the reason why they kept him out last weekend.  Wilkerson showed some terrific quickness in the passing game but against Buffalo, running the football will likely again be a priority.  Meanwhile, Harry’s one strength has been his physicality blocking on the edge and as a result, should Harry get the nod again, that may ultimately be the signal of where the problem may be.

Unfortunately, Harry’s inconsistency in the passing game remains a point of frustration for an offense that has often been just a few plays away from a victory in each of their losses all season.

With a less-than-pass-friendly forecast on deck, it’s possible that Wilkerson may end up being a spectator yet again but hopefully should they advance, he’ll get another opportunity.

Against a tough team like the Bills that’s obviously a big “if” and one can only hope they’re up for the challenge when they take the field on Saturday night.