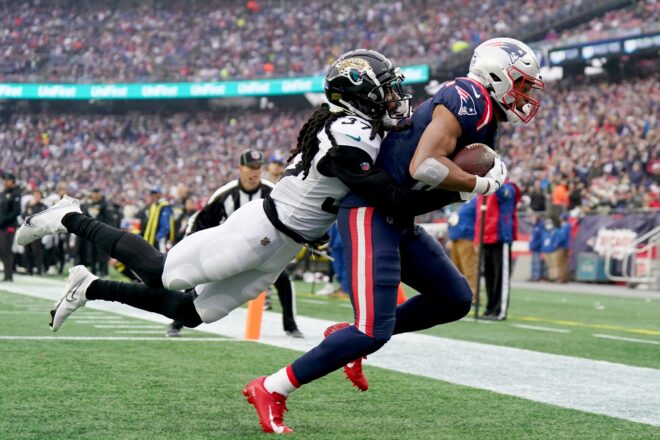 Here are some thoughts coming off of Sunday’s win over the Jaguars.

1) Sunday was a solid outing for Mac Jones, who hit his first seven passes of the afternoon, including a perfect 5-of-5 on the opening drive as the Patriots went up 7-0 thanks to a 2-yard touchdown run by Damien Harris.

He had the offense clicking on all cylinders and finished 22-of-30 for 227-yards and three touchdowns.  New England converted an impressive 8-of-10 on third down, with Jones completing 5-of-7 for 43-yards, all of which moved the chains.

Considering the fact it was rainy and wet, the weather didn’t have any effect on him.  He was incredibly accurate, throwing several terrific passes on Sunday, one of which was a beautifully thrown ball to Jakobi Meyers for a touchdown at the end of the half that put the Patriots up 28-3.  On the play, Meyers ran a perfect route, which saw Jones loft it right over the defender for the score.

He also threw another terrific ball to Kristian Wilkerson on the opening drive of the second half, with Wilkerson faking as if he was going to block and then broke past the defensive back and Jones lofted it for the 20-yard touchdown, which extended their lead to 34-3.

After the game was well out of reach, Jones eventually gave way to Brian Hoyer, who finished things up as New England won their 10th game of the season.  The victory also secured a playoff berth, which came thanks to the Titans demolishing the Dolphins 34-3.

Overall, it was a nice bounce-back game for the rookie, who had a difficult couple of weeks against the Colts and Bills.  With a big game up next against Miami, hopefully, the momentum continues as the Patriots continue gearing up for a postseason run.

2) Wide receiver N’Keal Harry was a healthy scratch on Sunday, with Kristian Wilkerson getting the nod and he made a pretty solid impact in his first regular-season game.

The former undrafted free agent out of Southeast Missouri State caught 4 passes for 42-yards including 2 touchdowns, one of which came off a nice move where he faked like he was going to block down on the defensive back, but instead blew by him and caught a perfectly thrown ball from Jones for the score.

Wilkerson made some noise in the preseason, leading all receivers in total receiving yards with 147yds on 13 catches.  Of his 13 receptions, 9 of them came from Jones, including 2-of-3 on third down.  As a result, the two already had some chemistry and they basically picked up right where they left off.  Better yet, his presence as the game went on seemingly started opening things up for other receivers, which made a big impact on New England’s passing game.

It was a nice start for a player who picked the second to last week of the season to make his presence felt.  Hopefully, there will be plenty of more games for him to shine as we get deeper into January.

3) Meyers had a terrific afternoon, with the veteran receiver snagging all eight of Jones’ targets for 73-yards including a touchdown.

He played a big role on early downs, with Jones hitting him on 5-of-5 targets for 45-yards on first down, which included his TD.

It was one of the best showings we’ve seen for a while from Meyers, who stepped up in a big way with Nelson Agholor still sidelined with a concussion.

He’s currently the team leader in both receptions (79) and receiving yards (796), with the latter stat putting him just ahead of Kendrick Bourne, who has 776-yards on 52 catches.

His touchdown was a nice over-the-shoulder grab, which came made a nice move in the end zone where he broke out to the sideline.  Jones lofted the football perfectly over the defender, with Meyers hauling it in for his second scoring grab of the season.

Meyers’ 8 receptions was the most since back in Week 8 against the Buccaneers where he also caught 8 passes, and one shy of his season high of 9, which came in Week 3 against the Saints.

4) Rhamondre Stevenson finished with his second career 100+ performance on Sunday, carrying 19 times for a career high 107-yards and two touchdowns.

The rookie running back has been outstanding, and that was certainly the case against Jacksonville.  What’s so impressive about him is the fact that every time he hits the hole, he disappears into the pile and then typically breaks through, often pushing defenders for additional yards.

He’s just a big, physical back and he’s dealt out some big hits on defenders, and he’s established himself as someone who defenses struggle to bring down.

That was definitely the case on Sunday.  The Jaguars had a tough time stopping him, with Stevenson pushing the pile for much of the contest as New England steamrolled up and down the field, with both Stevenson and Harris also accounting for two touchdowns each.

Stevenson’s addition has given New England the perfect 1-2 punch on offense, as Damien Harris has had a terrific year, largely because of the fact that Stevenson has been able to spell him and balance the load.  He missed last week’s game against Buffalo, and his absence was certainly felt during New England’s loss to the Bills.  Getting him back was big this week, as he also carried the load in the second half after the team continues to try and monitor Harris’ sore hamstring.

His 19 carries is the third most of the season, with Stevenson carrying 24 times for 78-yards during their victory out in Buffalo in Week 13, followed by the 20 carries he had against Cleveland in Week 10 where he rushed for exactly 100-yards.

5) J.C. Jackson continues to have a terrific year, finishing with another interception on Sunday, which helped set up the scoring drive right before the end of the half where Jones connected with Meyers to extend the lead to 28-3.

The play came as the Jaguars were getting close to midfield.  Quarterback Trevor Lawrence threw a low pass to Tavon Austin on a 2nd-and-6 and Jackson broke on the ball and got in front of the receiver to pick off the football.

It was a great play, as it gave New England great field position at the Jaguars’ 43-yard line with 1:59 left to go in the first half.  Six plays later, Jones connected with Meyers and it essentially put the game in hand by halftime.

For Jackson, the interception was his 8th of the season and the 25th of his career, which tied the NFL record for the most by a player in their first four seasons.

He continues to be outstanding and it’s likely going to set up an interesting situation at the end of the season for the former undrafted defensive back out of Maryland.

The Patriots will finish things up down in Miami this weekend and look to end the regular season on a high note.  The game was also moved to a 4:25pm ET start, after having previously been scheduled for a 1pm kickoff.  Sunday’s victory over the Jaguars also has the Patriots with an opportunity to win the AFC East, which would happen if New England wins and the Jets can pull off the upset against the Bills.

New England is also still in the mix for the top seed in the AFC, although that would require both a win down in Miami, and a few other things to go their way.  They would need a Buffalo loss or tie to the Jets, coupled with losses by both Kansas City and Tennessee.

READ NEXT:
Patriots-Dolphins Week 18 Key Matchups, Who Has the Razor’s Edge?
Posted Under: 2021 Patriots Season