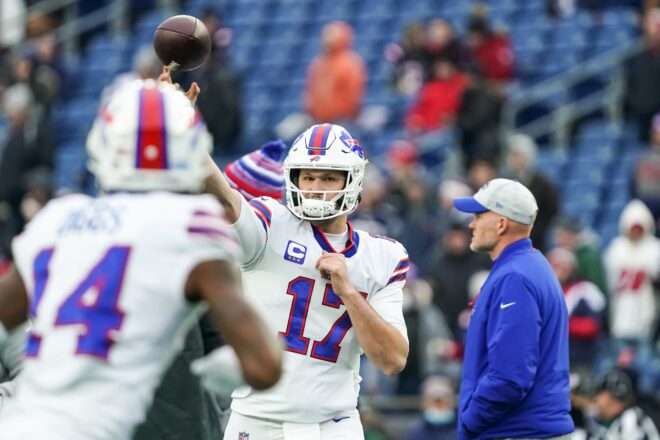 To paraphrase a famous holiday story: “Patriot Nation was all asleep in their beds…while visions of Super Bowls danced in their heads.”

Then Patriot Nation woke up to a very sobering and disappointing reality.

Coming off a bye week last week, the Patriots were 9-4 and sitting in the top playoff position in the AFC. A Kansas City win at the Chargers a week ago Thursday put the Chiefs ahead of the Patriots by a half game. Not to worry, all the Patriots have to do is win out and all will be fine.

The last four games are all winnable: at Indianapolis, Buffalo, Jacksonville, at Miami. 13-4. Playoff bye week. The road to Super Bowl LVI goes through Foxborough, just like old times.

Now here we are, two weeks later, and all those Super dreams have morphed into doubt, regret, and a mistaken belief that the Patriots, especially the defense, were back to elite status. Now, the Patriots stand at 9-6 after losses to the Colts and the Bills, and now are looking at one road playoff game (if they are that lucky), and that one game may be it for the postseason.

Mac Jones could not have been asked to play Tom Brady and win games all by himself. Jones has won over his fan base and teammates by doing yeoman work in his rookie season with so many expectations placed on him given his winning pedigree in college. After leading Alabama to the national championship last year with a monster performance in the title game against Ohio State, Jones could come into Foxborough, learn from a coach that is best friends with his former college coach, and winning ways will be restored to Patriot Nation rather quickly.

But the 2021 Patriots were not defined by Jones. They were defined by the defense.

The week before Christmas, the Patriots went into Indianapolis and took on the Colts, who also were coming off a bye week. The Colts were between a one and two point favorite, and Patriot Nation did not at all know why or how this was possible.

They all know now.

In their history, the Colts have not really been known for their defense, but rather their quarterbacks. From Johnny Unitas to Bert Jones to Peyton Manning to Andrew Luck, these guys are the standard bearers of the franchise, going back to when they were in Baltimore. Through the years, the Colts have gone through three phases of good to great defense: the late 1950s/early 1960s led by Gino Marchetti, the mid 1970s led by John Dutton, Joe Ehrmann and Stan White, and the mid 2000s led by safety Bob Sanders, who was the linchpin for Manning to finally make it to and win a Super Bowl.

The Colts may be in their fourth era of defensive greatness now. Led by middle linebacker Darius Leonard, the Colts throttled the Patriots last weekend, shut down their run game, bothered Jones all game long, and came away with a 27-17 win. It was incumbent upon the Patriot defense to shut down running back Jonathan Taylor and force Carson Wentz to win the game for the Colts.

That did not happen. Wentz was able to get away with horrid numbers (5-12, 57 yards, one pick, one sack) and the Patriots still couldn’t take advantage. Taylor bludgeoned the Patriots for 170 yards rushing on 29 carries, the most damaging run a late 67-yard TD burst when the defense needed a three and out to get the ball back and either tie or win the game in the closing seconds. The Colts were actually 2-10 on third down, but 3-3 on fourth down, which proved damaging for the Patriots.

The Patriots also suddenly morphed into a mistake machine. They committed eight penalties to only two for the Colts. Instead of looking sharp and ready to manhandle the Colts, the Patriots came out totally flat and unprepared to play this game. Jones himself admitted that practices that week were substandard, to paraphrase.

But in the end, the defense let the Patriots down. Had they been able to contain Taylor, they win. Wentz was let go by the Eagles for a reason. It was backup Nick Foles who beat the Patriots in Super Bowl LII, not Wentz. The Colts game was a win that should have been had.

They followed it up with another dud of a performance on Sunday at Gillette Stadium against the Buffalo Bills. A rematch of the 14-10 win in the wind in Buffalo was perhaps the last thing the Patriots needed after the previous week. A Bills team hell bent on revenge, who also are the defending division champs, combined to spell doom for the Patriots even though they were the home team and had better elements to work with.

From the outset this game belonged to Josh Allen. He threw for 314 yards on 30 of 47 passing, three touchdowns and a 104.4 rating. Allen was also the leading rusher for the Bills, gaining 64 yards on 12 carries for a 5.3 average. Someone named Isaiah McKenzie, a literal nobody even in Buffalo, managed to snare 11 passes for 125 receiving yards with all the top Buffalo wideouts missing from the game.

The Patriot defense could not get off the field. Other than a missed fourth down in the red zone, the Bills scored on all meaningful possessions and did not punt the ball at all in the game. Just to underscore this, no team ever coached by Bill Belichick had an opponent punt zero times in a game. The defense had no stops, especially in the fourth quarter when the game could still have been won. The Bills were 6-12 on third down and 3-4 on fourth down.

It really isn’t one person to hang the blame on. It’s too much zone coverage instead of man coverage. It’s not maintaining gap integrity and allowing large holes to open up for running backs. It’s not accounting for the middle with pressure on the quarterback coming from the edges. And it’s also the other team making the big plays instead of your guys (Allen is much better at the flick pass than Wentz is).

Now the Patriots are the six seed instead of the one seed. If the playoffs began right now they would have to play the Bills again at their crib. They have a layup against Jacksonville next weekend, followed by an always troubling season finale at Miami where anything can happen. The Patriots could very well be looking at a 10-7 finish and possibly needing help.

Hard to say as to what to do. The Patriots aren’t hurting for good players or healthy players. Having Stephon Gilmore back would be nice, but that ship has sailed. Matt Judon and J.C. Jackson are Pro Bowl bound, but that and a quarter gets you a cup of coffee. Somewhere along the way, the Patriots lost their edge. Some are blaming it on the late bye week, and the proximity of it to the holidays, breaking up the Patriot momentum over that seven-game win streak. Whatever the case, that intensity needs to come back.

A crushing of the Jets was the linchpin of the seven-game win streak. The Jaguars could give the Patriots the same lift. In this crazy year of parity, anything can still happen.