The three-time Super Bowl champion out of the University of Arizona played 13 professional seasons with the Patriots and earned the NFL’s Comeback Player of the Year award in 2005 after a successful return to football following a stroke.

Following his football career, Bruschi has gone on to become a successful TV analyst for ESPN’s football coverage and just recently landed a senior advisory position at his alma mater University of Arizona under head coach Jedd Fisch.

Over social media Wednesday, the NFL community took time to celebrate Bruschi’s career on his birthday.

Check out some of the best Bruschi memories and well wishes from “Bru’s” former teammates below.

A defensive captain from the @Patriots dynasty turns 48 today. Happy birthday to @TedyBruschi!

Only New England Patriot, since 1987 with

Happy Birthday to one of the greatest to ever put on an Arizona uniform, @TedyBruschi 🐐 Can't wait to have you back in Tucson!! 🎂 pic.twitter.com/W3QkMCvBGa

If you're sharing a photo, a moment, that defines him as a Patriot and it's not this then do you even Bruschi, bro? Also HBD, Tedy! pic.twitter.com/kjvAFSsB2s 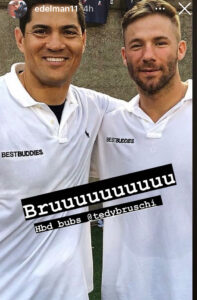