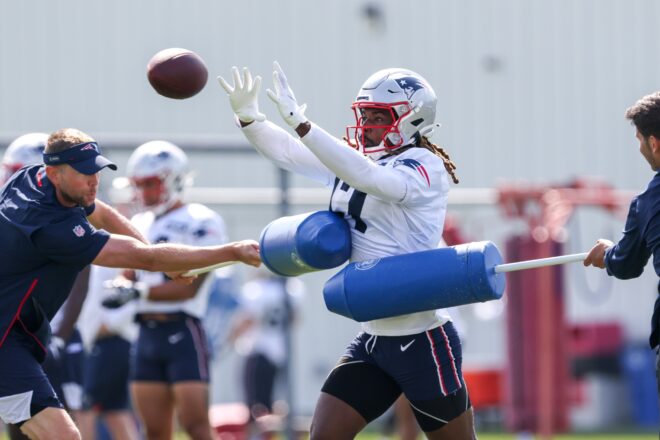 After losing to the Colts on Saturday night, Sunday’s rematch against Buffalo has suddenly taken on a little bit more importance given what’s at stake heading into the remainder of the season.

The loss to Indianapolis, coupled with how things shook out over the weekend, knocked them down to the two seed with four games left to play.  Meanwhile, the Bills took care of business against the Panthers, which could see them overtake New England on Sunday if they can walk out of Gillette Stadium with a victory.

For the Patriots, it’s going to be a tough battle.  The team played a physical game against Indianapolis, which saw both receivers N’Keal Harry and Nelson Agholor each both suffer injuries late.  Harry was back on the field for practice on Wednesday, while Agholor was absent due to his concussion.  Harry’s injury is listed as a “hip” injury, and he was reportedly limited during the session.

That sets up an interesting situation as it could potentially mean other players seeing time this weekend, with Kristian Wilkerson and Tre Nixon each among names who could be catching passes from Mac Jones on Sunday.

Wilkerson is probably the most intriguing of the two receivers, with the former standout from Southeast Missouri State finishing as the team’s leading reception and yards leader during the preseason.  Wilkerson caught 13 receptions for 147-yards, 9 of which came from Jones.  The two connected on 9-of-13 for 93-yards, and here’s a quick breakdown of how those connections played out by down:

One quick note on the above totals, Jones was 4-of-9 (44.4%) for 44yds overall on third down during the preseason, with all four of those completions moving the chains.  Wilkerson was his leading receiver on third down, catching two passes for 15 yards, of which both receptions resulted in first downs.

The two had their best game in the opener against Washington, as Wilkerson caught six passes for 39-yards from Jones.

As for Nixon, he was never targeted by Jones and really only saw time in the final game against the Giants.  In that game, he finished with just three targets and two receptions, which went for 11-yards.  All of those came from Brian Hoyer.

Head coach Bill Belichick talked about how far Wilkerson has come this season, with the wideout really making his presence known on the practice squad.  Belichick pointed out that he’s played the role of the other team’s best receiver on the scout team, and the results have certainly been positive for a Patriots club that battled back to 9-5 after a 2-4 start.

“Wilk’s really improved in every area of the game,” said Belichick.  “First of all, overall, just the maturity and professionalism. Just the way he prepares, trains, takes care of himself, is ready to go every day. He’s very dependable when he walks in the building. You know what you’re going to get from him. As a receiver and a blocker, he’s improved in his route running, his blocking, all things that go into being a receiver, catching the ball.”

“He consistently shows up in practice. A guy we have trouble covering. Generally, depending on who we play, but generally speaking, he would play the other team’s best receiver, gets a lot of opportunities, gives us a good look on that, and it gives him an opportunity to show up on plays that the other team’s player is heavily targeted on. He has been a productive player in the kicking game for us as well in practice. It’s obviously different in the games, but a bigger receiver that can run that has some playing strength. He continues to improve and grow.”

With Agholor’s status in doubt, it seems like Wilkerson may get a chance to finally hit the field.  But after seeing he and Jones work in the preseason, the two seem to already have some chemistry, which will hopefully pay dividends if he’s called upon.