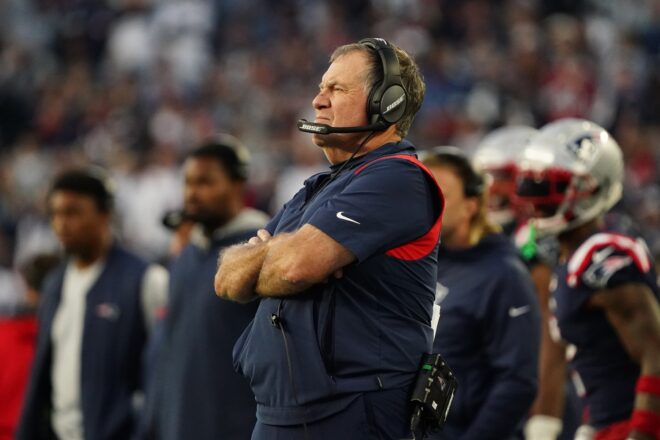 Patriots head coach Bill Belichick was clearly frustrated after Saturday night’s loss, as his club had its seven-game winning streak snapped during a 27-17 defeat in Indianapolis.

One of the key moments of the game was the ejection of Kyle Dugger, who got into an altercation with Colts receiver Michael Pittman Jr. in the third quarter, which led to both players being tossed from the contest.

Dugger’s loss was significant because it impacted New England’s defense down the stretch, which made it even harder as the team tried to stage a comeback before ultimately coming up short.

Looking back at how things transpired, Belichick was still irritated on Monday as he talked about how things played out, along with the fact that Colts receiver T.Y. Hilton, who pushed an official, was somehow still allowed to remain in the game.

“We’ve talked about those situations,” said Belichick on Monday regarding Dugger’s ejection.  “We talk about them every year. We talk about them multiple times throughout the course of the year. When I see what happened, not sure how anybody will see it. It doesn’t really matter what I think anyways. We’ll go through it.”

“Based on the rule, I don’t see why T.Y. Hilton wasn’t ejected,” Belichick continued.  “He pushed an official. That was pretty clear, but that wasn’t called at all. That’s a clear-cut ejection to me. The Dugger play, [Michael] Pittman comes from behind, Kyle turns around, there’s an exchange, and his helmet was off. He was trying to put his helmet on as he approached Kyle at the end of the play, so he came up pretty quickly. I don’t know whether Kyle knocked it off or if it would’ve come off anyway.”

“Bottom line is both players got ejected. I would say I understand that. Whether I agree with that or not, that’s a whole other discussion. I don’t understand why T.Y. Hilton wasn’t ejected for contacting an official. Intentionally or unintentionally, that has no bearing on the play. Those plays are reviewable and are reviewed, so I don’t understand that one. You’d have to talk to the officials about that. They were the ones that made the call.”

Meanwhile, one other frustrating part of Saturday’s loss is the fact two other Patriots were injured, with both receviers Nelson Agholor and N’Keal Harry enduring big collisions on a couple of questionable hits.  Agholor was struck with a helmet on his reception, which knocked him out of the game, while Harry took a shot as the ball arrived on a target late in the contest.  Harry limped off the field after the play, leaving the Patriots further undermanned down the stretch.

The hit on Agholor looked like it should have been a penalty, yet no flag was thrown.  Belichick was asked about the two plays and it’s obvious he’s not happy about them, offering a short, “Talk to the officials,” when they were brought up during his press conference.

As a result, it’s obvious he’s not pleased with the officiating from Saturday night, which was inconsistent to say the least.

However, at the end of the day, the head coach seemed ready to turn the page knowing that they’ll also need to play better heading into Sunday’s match-up against the Bills, which is where the focus will now shift to.

“We’ll see what happens this week,” said Belichick. “We usually don’t focus too much on what happened the week before, good or bad. After we get through it and correct it, talk about it, focus on the game that’s coming up and try to prepare the best we can for it.”